Review: Netflix’s Punisher Is a Brutal and Surprisingly Sensitive Look at What It Means to Be a Soldier 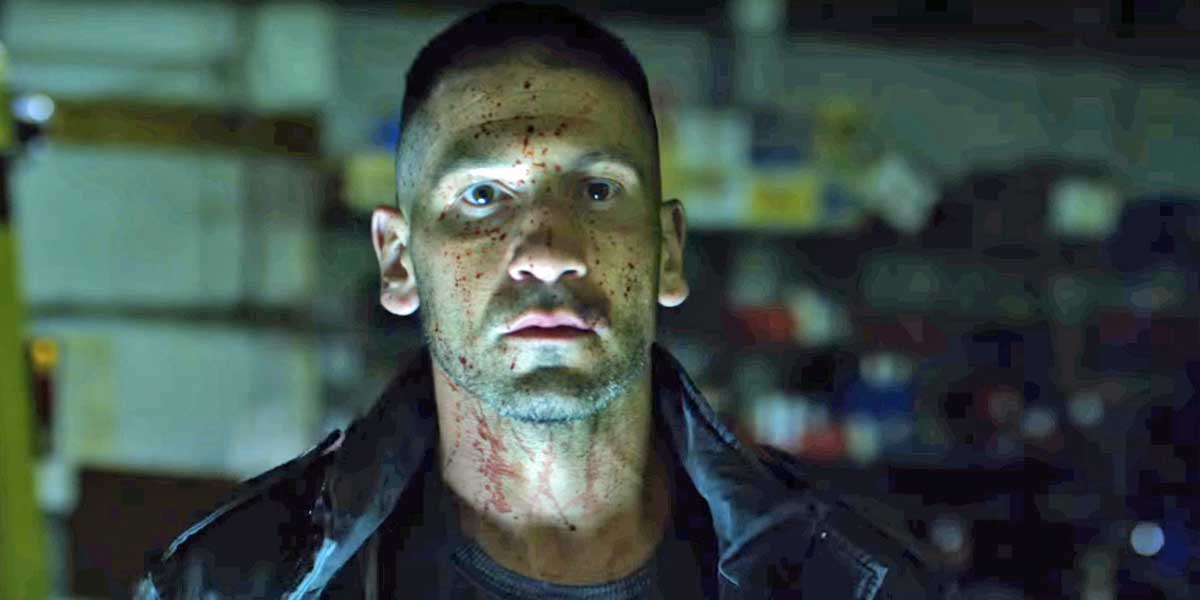 Six episodes in, the Netflix Punisher production is related to Marvel’s superpowered world by name alone. Punisher could just as easily be a drama on any network about an ex-Marine named Frank Castle who is very, very good with guns and very, very sad.

I’ve been covering Punisher news for a while now—and was a big fan of his appearance on Daredevil season 2—so I thought I could’ve predicted the tone and nature of the Punisher series. To my surprise, instead of a darkly bombastic spectacle of blazing guns, Punisher unfurls quietly and with almost painstaking slowness, a nuanced portrait of a damaged man and the damaged people around him, all of whom are struggling with personal demons. I’m now halfway through the season (the episodes I was given to review), and have discovered that Punisher deals with PTSD and the lingering traumas of war and loss as much as it doles out bloody vengeance.

The result is a show that takes some time to gather the steam to propel it forward. By then, however, you’re invested in the characters and along for the ride. While Jon Bernthal’s glowering, gloomy Frank Castle is at center stage (Bernthal is excellent, and it’s impossible to look away from him), this might be the first Netflix/Marvel show where the rest of the cast feels vitally real and important to the story.

Netflix’s superhero series have long succeeded in giving us likable secondary characters and sidekicks, like Foggy Nelson, Claire Temple, and Trish Walker. But Punisher is the first time that we really get to follow this kind of character home, to see how they spend their evenings, how they interact with their families, who they love and who they hate. The result is a broad richness of characterization that is unparalleled in the Marvel TV universe thus far. 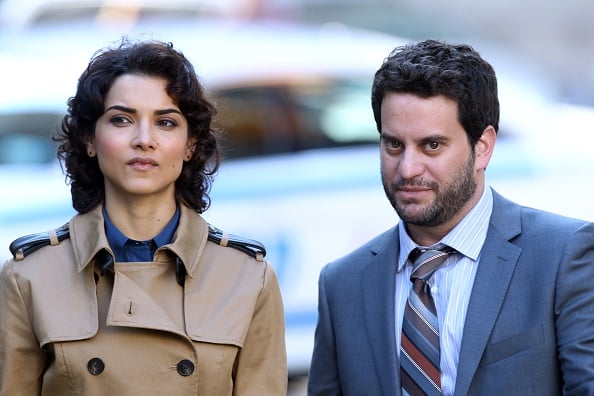 My two favorite new characters play opposing roles in Frank’s life. Homeland Security agent Dinah Madani (Amber Rose Revah) wants to find Frank for her own reasons, and she is one of the coolest “hunting the bad/good guy” cop-types I’ve ever seen. She basically takes that old Javert/Valjean trope and flips it on its head (in one scene, quite literally).

An Iranian-American child of refugees who works in high-level government, Madani is a character that America needs to see right now. Unflinchingly patriotic, she’s still willing to question the system, and she is brilliant, capable, tough, in charge of her own sexuality, and very human. It’s so refreshing to see a government agent who is ostensibly chasing our “hero” actually be a flawed and interesting person in her own right. She has a warm relationship with her wry, glamorous mother (played by the great Shohreh Aghdashloo), which means that Punisher sails through the Bechdel test in its first episode.

I also love David Lieberman (Ebon Moss-Bachrach), a.k.a. Micro, who is basically Frank’s “sarcastic computer nerd guy,” but will be known to fans of the comics as Frank’s longtime ally. Here they start out with a clean slate. Micro is a former NSA analyst, clearly modeled on the Edward Snowdens and Chelsea Mannings of the world, who goes rogue and leaks information for moral reasons.

The results have dire consequences for both Micro and his family, and he needs Frank’s help to set things right. Micro has a beautiful wife, Sarah (Jaime Ray Newman), and a young daughter and son—a sort of living echo of all that Frank lost after his own family was taken from him. Frank wakes up most days from dreams of his wife being murdered in front of him, and experiences melancholy flashbacks of his slaughtered daughter and son. As he is drawn into Micro’s family, the depths of grief are explored in ways I would never have believed a show about a callous vigilante would be capable of. The writers behind Punisher know what it is like to lose someone too soon, and what it feels like to be left behind. 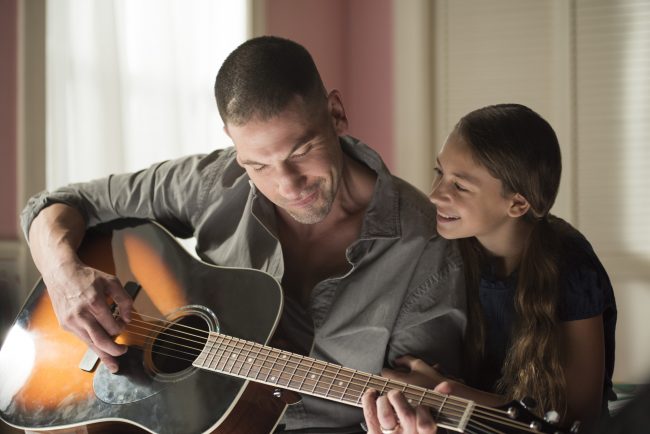 Their relationship takes time to take hold, but Frank and Micro have some of the best chemistry and liveliest scenes together, and they make for a new and refreshing spin on the hero and his sidekick—perhaps appropriate for a series where the “hero” is more of an antihero and doesn’t always have our sympathies. Micro has a lair that might be my favorite Marvel/Netflix abode yet, and the series as a whole is shot well against an atmospheric backdrop of some of New York City’s less savory environs.

Also in Frank’s orbit are the two friends who know that he is still alive after the events of Daredevil: a kindly, world-weary corpsman that he served with, Curtis (Jason R. Moore), who lost a leg to war and now runs a veterans support group, and reporter Karen Page (Deborah Ann Wohl), a familiar face to Daredevil fans.

There is a gentle respect, affection, and trust between Frank and Karen—rather a lovely dynamic to see play out onscreen between a man and a woman who are not romantically involved (at least not yet). But other than the connection to Karen, there is little else in the episodes I’ve seen that bind Frank to Marvel association at all. Punisher feels incredibly rooted in our real world. 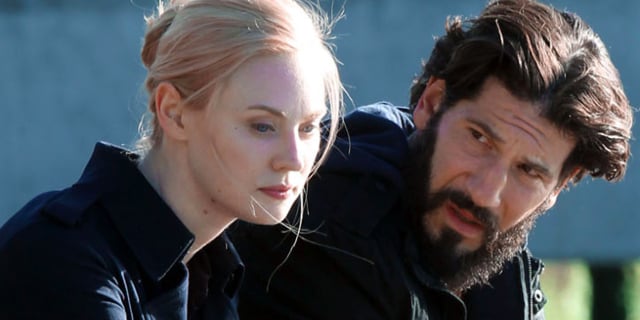 The scenes of Curtis’ support group explore the problems that can follow soldiers back from war with more insight than I’ve seen in mass media in the sixteen years we’ve been in Afghanistan, which is no small feat. Another ex-Marine on the scene is Frank’s best buddy, Billy Russo (Ben Barnes), who has capitalized on his skillset and now runs a sort of Blackwater-type mercenary company. But Billy does not know that Frank is alive, a plot point that will become salient as the show progresses.

Punisher‘s politics can be tricky to parse. One member of Curtis’ group is a cartoonish, racist “make America great again” type we’re meant to hate; the treatment of the military can feel one part glamorizing and two parts “these wars are terrible and fueled on torture and corruption and totally unnecessary.” Yet for all the criticism, the opposition fighters on the ground are portrayed as faceless others wrapped in face scarves that Frank massacres with impunity. Guns and gun violence looms large and goes unquestioned. Individual soldiers and heroics are lauded, but the institutions at the top of the foodchain—the Army, the CIA—are often depicted as corrupt and rotted from the inside.

Make no mistake about it: for all of its unexpected sensitivity to mental illness, trauma, and family dynamics, Punisher still has the kind of graphically violent scenes—some of which are cringingly extensive and made me shut my eyes to the sound of bones snapping—that Punisher fans are anticipating. While there are many, many guns, Frank tends to engage in a ferocious one-on-one (or one-on-ten) physical combat style, like a berserker out of legend. This is his story and we are meant to root for him, but he also has zero compunctions about killing those that he deems “dirty,” often in the most painful way possible. Watching Punisher is like an exercise in understanding your own moral compass.

I watched the first few episodes with a friend who is a huge fan of Garth Ennis’ Punisher run, and his verdict was that while this Punisher felt quite divorced from his depiction in comics, he was still intrigued enough to keep with the show. The last episode I saw ended on a delicious mid-season cliffhanger that I saw coming but still changes everything, and makes me very excited for the show’s full slate to debut on Netflix on Friday. Many will no doubt find the show far slower to start and gather momentum than they were expecting. But I think that you should stick it out.

While the central plot that Frank has set out to unravel doesn’t feel like the deepest of mysteries, the characters who inhabit this world—and the real-world truths they carry with them—are worth the visit and the investment of your time.