The Psychology of Inspirational Women: Batgirl

There have been a number of heroic women who took it upon themselves to protect the city of Gotham as Batgirl. Among the first of these was Betty Kane, who was Bat-Girl (initially hyphenated, similarly to Spider-Man). Others, such as Helena Bertinelli (also known as the Huntress), also at one point put on the bat suit. However, the best-known superhero behind Batgirl is Barbara Gordon.

Dr. Barbara Gordon has a Ph.D. in library science and is a librarian in Gotham City’s Public Library as her day job. At night, however, she puts on her bat suit, and fights crime, like Batman and other superheroes. Her father, James (Jim) Gordon, is a long-time friend of the Batman, and there is some speculation about whether or not he really knew Batgirl’s true identity. Like Batman, Batgirl has no superpowers and fights for justice with her physical and mental skills.

In Batman: The Killing Joke (1988) by Alan Moore (writer) and Brain Bolland (artist), Barbara Gordon (in her civilian identity) was shot and violated by the Joker and his crew (the extent of the assault is unclear, but she was posed naked in order to psychologically torture her father, Jim Gordon). After her injury, Barbara becomes paraplegic and is unable to resume her identity as Batgirl. Instead, she assumes a new superhero identity—Oracle, a computer expert, created by Kim Yale and John Ostrander, in 1989. Oracle is able to help Batman and other superheroes with her excellent computer/satellite tracking skills. 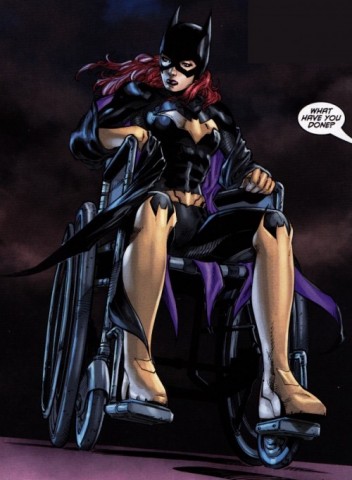 In the New 52, writer Gail Simone established that Barbara Gordon is struggling with post-traumatic stress disorder (PTSD). PTSD occurs when an individual experienced a traumatic event (as Barbara did when she was shot and tortured) and then develops certain symptoms, such as intrusive memories or nightmares about the trauma, hypervigilance, avoidance of anything reminding them of the traumatic event, and a change in mood (for example, irritability, numbness, and other mood changes). Barbara Gordon, similar to many service members, as well as police officers, firemen, and other first responders, appears to have these symptoms and experiences a change in her identity.

In order to do proper justice to this character as well as in order to promote mental health awareness, Gail Simone consulted with one of my fellow colleagues and friends, Dr. Andrea Letamendi about how PTSD might look and how it might be treated in therapy. Simone then demonstrated Gordon’s process of undergoing treatment and even made Letamendi a character in the series. Undergoing both psychotherapy for PTSD and physical therapy allows Barbara to heal and rediscover her identity of Batgirl.

This story arc is especially powerful because it demonstrates how human it is to struggle with a mental health issue. The truth is that many of us have probably been through a painful or a traumatic event and while not everyone who undergoes trauma develops PTSD (only approximately 20% of people exposed to trauma do), most people struggle with something. Gail Simone’s Batgirl demonstrated that there is no shame in seeking help (even Superheroes need it) and in fact in can allow us to become the very best versions of ourselves. Other projects and organizations, such as Project UROK, openly talk about how people might be affected by mental health in order to spread awareness and demonstrate how common mental health disorders are.

Like Batgirl, some of you might have been seriously hurt, physically or psychologically, or both. Know that you are not alone, know that it’s ok to ask for help/surround yourself with powerful sidekicks to help you fight and reconnect with your inner superhero. In fact, recovery from painful experiences can lead to what is called posttraumatic growth, which allows the individual to find the strength and meaning from a traumatic event, like Barbara Gordon did.

I had the honor of being on a panel with Gail Simone and Andrea Letamendi at SDCC, where we discussed this very topic – the implications of comic book characters, like Batgirl in treating PTSD and other disorders

I leave you with the wish that you all know how amazing and heroic you truly are and how much you matter.