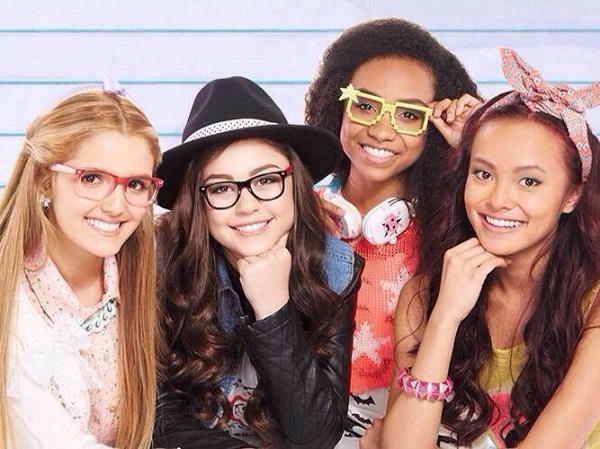 The Mary Sue is all about positive media for young girls, especially when it’s about girls embracing STEM studies. So I may have started grinning when I found Netflix had Project Mc2, a three-episode live action miniseries about four teenage girls who use their science know-how to be secret agents and save the day. Premiering earlier this month, I sped through the episodes quickly and found a lot to like, so let’s break it down.

Camryn (Ysa Penarejo) and Bryden (Genneya Walton) are two of the smartest students at their school, and they notice something strange about the new girl McKeyla (Mika Abdalla). Not bad-strange, but the kind of strange where they’re clearly going to investigate. Getting the help of fellow science-focused student Adrienne (Victoria Vida), the three girls finally track down McKeyla at her house and find out her big secret—she’s actually undercover for a super spy organization run by women. The Quail, McKeyla’s chief intelligence agent (played by Danica McKellar, who herself is a mathematician along with her acting career), decides that the other girls could help them with the mission, and so they’re recruited into the spy program NOV8.

There’s a lot to be praised in this relatively short show. For one, we have a series where no one girl is considered “the smart one”—all four girls are highly intelligent in their own way. Camryn is basically a mechanical engineer who has, among other projects, created a suped up skateboard and a police surveillance device. Bryden is more into hacking and electronics, taking apart old smartphones to create a spy/selfie pen (oh yes, this is a pro-selfie show). Adrienne specializes in culinary chemistry, using science to make deliciousness (there’s a running joke in the show that no one realizes culinary chemistry is a thing, but I went to culinary school and I can tell you that yes, it’s a thing). And then there’s McKeyla, who, as the seasoned super spy, is more well-rounded in her skills, studying a variety of deduction and scientific topics to be the best.

While much of the three episodes involved the three new spies struggling to keep up with McKeyla (and getting distracted by their excitement over the adventure), a nice touch was that McKeyla isn’t perfect at everything herself—she’s more of a jack of all trades than a specialist in one thing. Meanwhile, Camryn, Bryden, and Adrienne are specialists, which means the team is stronger when they’re all working as one.

There are a lot of nice little details to encourage STEM studies for young girls. For one, all the girls start off the story loving science and math in their own ways. We also get that line from the Quail when explaining the all-woman spy organization: “Yes, it’s true. Women do run the world.” Adrienne says she studies chemistry to walk in the footsteps of her grandmother, who is the most accomplished culinary chemist in Spain. There’s even a part where Adrienne teaches another girl they meet how to do an experiment. Since the show right now is only three episodes, I’d be interested to know what how the writers would handle the other girls at school (who in the story seem mostly interested in the prince’s antics) if the series was given a larger order.

I’m on the fence about their mission objective, which is to protect a thrill-seeking prince who has been sent a threat right before his big space shuttle launch. On one hand, the prince is essentially a damsel in distress that our heroines must help. Oh the other hand, the three new secret agents on the team struggle in their mission because they keep getting distracted and star struck by this cool celebrity—the star struckness was more about them thinking he was cool then having crushes on him, but it was still a lot of story focus for a character I didn’t really care about as much as our four leads.

The production is putting out several spy/science kits, as well as a corresponding doll line with mini experiments to fit each character. I haven’t gotten to see them in person, but from what I can tell from some of the marketing on their site, some attention has been paid to including actual science education into the toys. The dolls look like most fashion dolls in the toy store, but the diversity of the characters is certainly a plus.

It’s important to recognize Project Mc2 is a show made with kids and pre-teens in mind. There’s a good amount of goofy dialogue (including saying hashtags out loud as part of sentences) and some of the science/hacking gets cartoony and unrealistic, but the silliness is pretty on par with other live action kids shows out right now. More importantly, the focus on STEM studies as ways to solve problems is a huge part of Project Mc2 and easily the show’s biggest strength. If you’re looking for a show to check out with your little girls, Project Mc2 would make a fun afternoon. And I’d certainly love to see Netflix expand the show for more episodes.

Katie Schenkel (@JustPlainTweets) is a copywriter by day, pop culture writer by night. Her loves include cartoons, superheroes, feminism, and any combination of the three. Besides The Mary Sue, her work can be found on Panels,  Quirk Books, Playboy, CliqueClack, and her own website Just Plain Something, where she hosts the JPS podcast and her webseries Driving Home the Movie. She’s also a frequent TMS commenter as JustPlainSomething.