That's Princess Toadstool to you, mister. 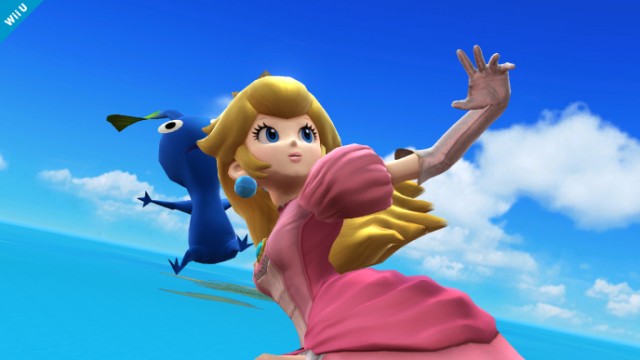 When I was in elementary school, playing games on the Nintendo Entertainment System and dreaming about getting a Game Boy Color for Christmas, two video game characters in particular helped me visualize a space for girls like me in the medium I would grow to love and write about.

One was Lara Croft, the heroine of Tomb Raider, the action-adventure game series that, yes, oversexualized its female lead while also making her bad-ass enough to inspire me (and countless other girls) to run around my backyard in a ponytail and shorts as close to hers as I could find. I’d pretend to wield dual pistols and hunt for dinosaurs that were no doubt hiding in the woods of Pennsylvania.

The other was—and just bear with me—Princess Peach, who meant more to me at the time than Lara or any other video game heroine has since.

With Peach’s recent appearances in Nintendo games, I’m reminded of this period in my childhood. In November, Peach donned a catsuit alongside Mario, Luigi, and Toad and ran around colorful stages in Super Mario 3D World. Six months later, in May, she hopped on bikes and in karts in Mario Kart 8—as an adult, a baby, and a solid gold princess. And today she’ll return as a contender in the new Super Smash Bros. games for 3DS and Wii U.

In a way, she’s been more powerful in the last year than she has been in decades, yet she’s not quite as formidable as when I first met her.

Below is a look at Peach throughout Mario history—the games that did her justice, the ones that let her down, and why through it all, I still love her.

My first step into games was through a scattering of NES cartridges and old copies of Nintendo Power magazine, which my two older sisters subscribed to in their teens. I was in love with a comic that ran in its issues throughout 1992 called Super Mario Adventures. Friendly Floyd remains one of my favorite Mario side characters, and at the time I drew, illustrated, and cut out paper versions of all the characters and items and stuffed them into a small suitcase to match the traveling salesman’s luggage. 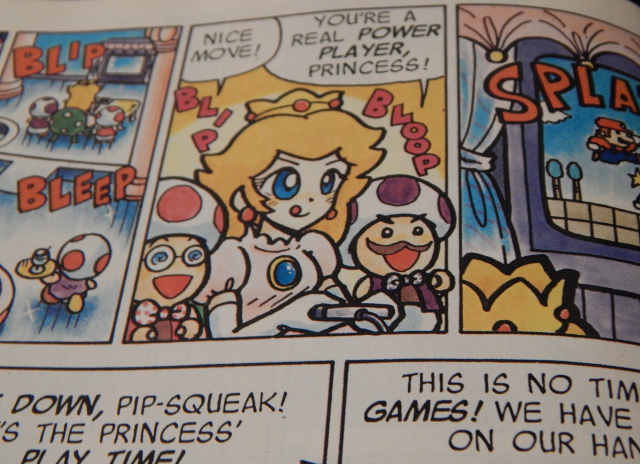 Nobody ever told this girl she couldn’t play games.

Peach in Super Mario Adventures was quite the bombshell. In the first issue, she’s shown sitting around with a couple Toads who are supervising her royal “play time”—not cake-baking or sewing patches onto overalls but playing Super Mario Bros. for NES, the same set of games I was playing back then.

In the ’90s more than today, girls weren’t the prime demographic for video games, and they certainly weren’t catered to as players. So to see Peach, the helpless princess, enjoying a video game and kicking butt at it was a Big Deal.

That wasn’t the only progressive quality about this particular Peach. When Bowser stirs up trouble at her castle and threatens to turn all of her people in the Mushroom Kingdom to stone if she doesn’t marry him, she calls him a “Koopa creep” and a “buckethead” and jumps off the balcony in pursuit as he makes his escape. While Mario is turned to stone and Luigi is wailing in panic, she “refuses to be bullied,” takes charge, and sets off down a pipe after Bowser.

After that, the storyline splits in two, with Mario and Luigi coming across a Yoshi village and Peach stomping across a scorching desert. She tries hard to motivate her troop of Toads, who are dehydrated and exhausted from the heat. Then, despite her best efforts, she gets kidnapped by Bowser. 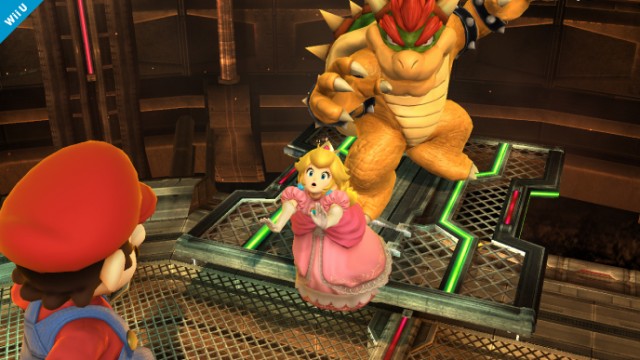 A familiar scene playing out in Super Smash Bros. for Wii U.

Ever since Jumpman first rescued Pauline in the 1981 arcade game Donkey Kong, Princess Peach (or Princess Toadstool, as she was sometimes called) has been a damsel in distress. While she’s become a playable character in many spin-off games, she’s rarely ever a central character or given any meaningful story or gameplay moments to herself. She’s always there at the end, waiting for Mario to arrive so she can reward him with a kiss.

A few Mario games have given her some power. The 1988 NES game Super Mario Bros. 2, which was never meant to be a Mario game at all, made her into one of four playable characters with the advantageous ability to float long distances. In other words, she could pull turnips and bop them at enemies with the best of them—plus get by some narrow scrapes by hovering in the air. Her likeness was simply pasted over the model of Lina, the female character from the original Japanese version Yume Kōjō: Doki Doki Panic, to transform it into a Mario game for America. 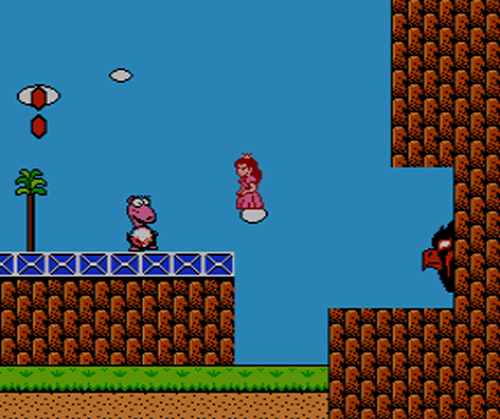 Super Mario Bros. 2—weird in and out of context.

Peach was also a main party member in the 1996 Super Nintendo game Super Mario RPG: Legend of the Seven Stars, which in turn inspired two role-playing game series, Paper Mario and Mario & Luigi. Super Mario RPG was made by developer Square rather than Nintendo itself, which may explain Peach’s larger involvement, but it wasn’t much of a step in the right direction. She’s still kidnapped and needs rescuing, and she’s the last character to join your team. In battle, she’s either relegated to using defensive or healing moves, traditional of supportive characters, or attacking with weapons like a parasol or a frying pan.

Yes, a frying pan. It’s another symbol of domestic life and not the only one to be found in the overarching series. In both Super Paper Mario and Super Princess Peach, she wields an umbrella, which doesn’t remind me of domesticity as much as it (and the frying pan) conjures to mind the stereotype of a husband being whacked by his nagging wife.

In fact, Peach’s presence isn’t entirely welcome in Legend of the Seven Stars. “You’re NOT thinking of joining them, ARE YOU?” the Chancellor warns her. “This is sheer madness … You’re a Princess! What will people say?!” These lines enforce the idea that Peach doesn’t quite belong. She’s a woman—a princess. What can she do?