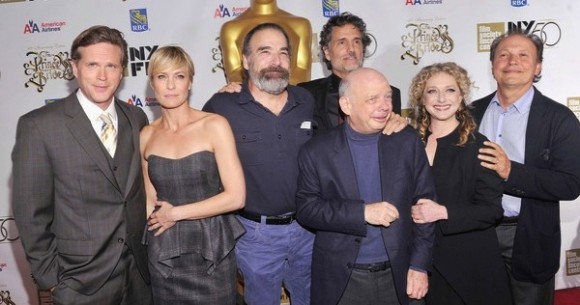 Consider my heart officially warmed. The cast of The Princess Bride got together last night at a New York Film Festival screening to celebrate the 25th anniversary of their classic film.

Absent from the screening was, of course, André the Giant, a.k.a. Fezzik, who passed away in 1993. In a post-screening Q&A, Mandy Patinkin (Inigo Montoya) shared with the 1,000-strong audience how André comforted a deathly-afrid-of-heights Wallace Shawn (Vizzini) during the Cliffs of Insanity scene by cradling the actor—who was a good two feet shorter than him—in a makeshift papoose, patting him on the head and saying “Don’t worry. I’ll take care of you.” I’m sorry, I just have something in my eye…

William Goldman, who wrote the novel and its screenplay, even had something to say about a possible sequel, even though it’s not exactly encouraging: “I’m desperate to make it and write it and I don’t know how…. I would love to make it, more than anything else I’ve not written.”

Awwww, Goldman, don’t beat yourself up. I, for one, would love a sequel if done well, but The Princess Bride is one of those movies that, for me, is perfect in its own right, without any need for changes or additions. Unlike other ’80s fantasy movies (*coughWillowcough*), it has aged remarkably well, after all.

But if you were to finish Buttercup’s Baby, well, I wouldn’t complain.