I could not have been more excited when it was announced last month that one of my favorite actors, Lakeith Stanfield (perhaps best known as Darius on the FX series Atlanta), was to play the lead role in a developing a film adaptation of one of my favorite graphic novels, Ronald Wimberly’s Prince of Cats. Riffing off Shakespeare’s Romeo and Juliet, Prince of Cats is set in 1980s Brooklyn and centers on Juliet’s cousin, Tybalt. With original dialogue written in iambic pentameter and full of nimble wordplay, Wimberly’s remix feels like a simultaneous update and a seamless expansion on Shakespeare’s play.

A Shakespeare redo can be a challenging endeavor, and the success of Prince of Cats is in its thoughtfully crafted original contributions to the otherwise familiar world of duels, parties, trysts, and tragedy. Purists can have no quarrel here, because it isn’t a retread. We all know how Tybalt’s story ends, but Prince of Cats rewinds things a bit to show us how he ends up there.

He isn’t just the fierce, scrappy cousin whose death has devastating implications for the star-crossed lovers. His ending here is devastating in its own right, the conclusion of his own nuanced chapter in the larger drama. Wimberly weaves in and out of Shakespeare’s lines, chasing down ideas and characters the Bard merely gestured towards. For example, Rosalyn (as in, Rosaline?) as Tybalt’s girlfriend adds some interesting context to Romeo’s love-life whiplash and hints at more intermingling among the young people in this community than the hard-lined Capulet vs. Montague showdowns might have readers believe. 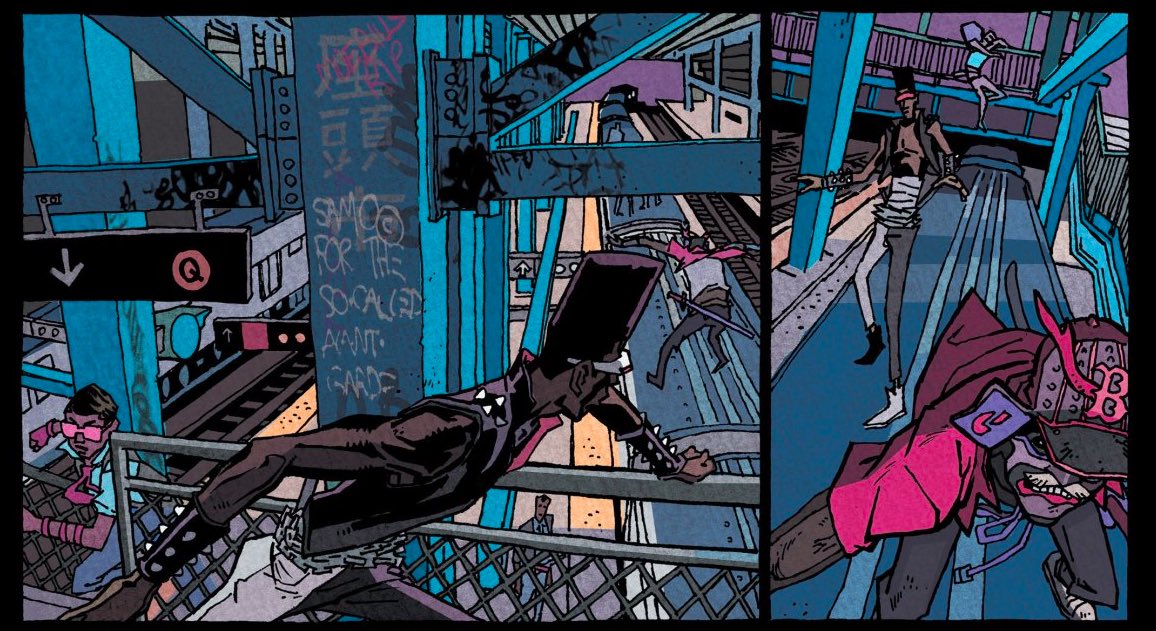 Wimberly’s mix of Shakespeare, hip hop, fashion, Kurosawa, and New York City not only works well for Tybalt’s story, but is deeply engaging from an aesthetic standpoint, if any of those things interest you. There are so many Easter eggs to find in the dialogue and artwork.

One of my favorite finds was the SAMO© graffiti around the city, because of course it would be there. The history and meaning of SAMO©, a 1980s art project by Jean-Michel Basquiat and Al Diaz, makes perfect sense in Tybalt’s Brooklyn. You can almost imagine Tybalt exchanging a nod with the duo at a club—or a duel—but even as this detail grounds the story in reality, the contrast of teenagers dueling with samurai swords propels the stakes back into the realm of dramatic tragedy.

There’s an internal logic that brings all these elements together, and that internal logic is Wimberly’s imaginative dexterity. For more insights into the way Wimberly creates the aesthetic and narrative harmonies of Prince of Cats, definitely check out the forward by scholar John Ira Jennings. 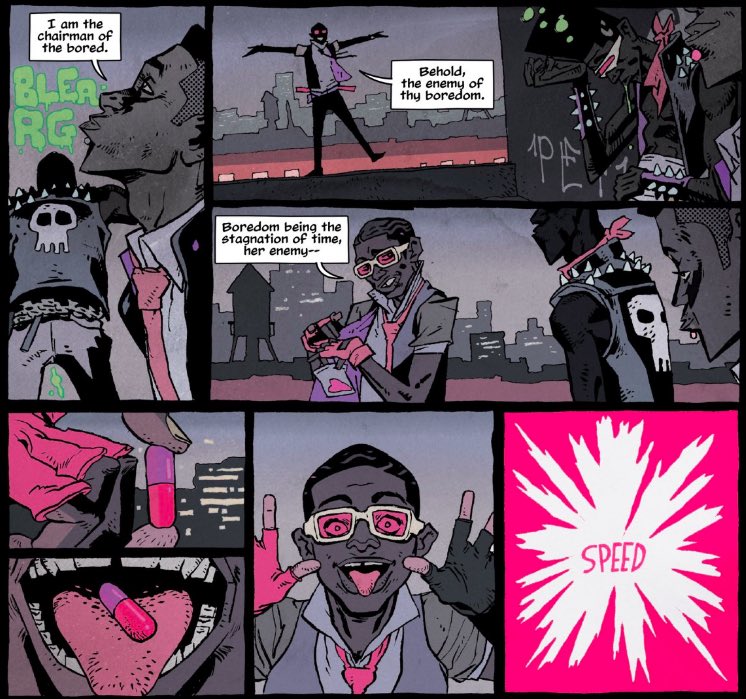 Prince of Cats is certainly not the first presentation of Shakespeare through a stylized, contemporary lens. Like Baz Luhrmann’s film Romeo + Juliet, the modernization in Prince of Cats highlights an essential part of the original play that can sometimes get lost in versions that aesthetically adhere to its historical moment.

That is to say, Prince of Cats is a story about reckless, passionate, incandescent youth. The young people of Romeo and Juliet feel things with complete, fatal profundity. Prince of Cats explores Tybalt’s relationship to this theme, delivering it in crescendos and refractions that Stanfield, with his uncanny ability to project an almost mystical, untouchable vulnerability, will be well suited to personify as this more fully realized version of Tybalt.

Tia Vasiliou is a senior digital editor at comiXology. Find her on Twitter @PortraitofMmeX.