PowerPot Will Charge Your USB Devices While Boiling Water 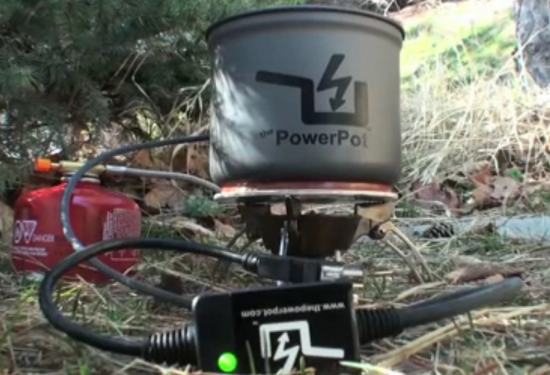 Back in the day, before the whole electricity thing took off, fire was the absolute necessity. Now that we have things like microwaves and electric stoves, electricity is the big one, for most of us. But who’s to say that having fire can’t mean having electricity too? Certianly not the guys behind PowerPot, the first completely usable cooking implement that will generate electricity while it’s boing up some water, letting you charge and operate USB devices with a flame.

The PowerPot uses thermoelectric generation to create its electricity. The process itself isn’t new, and though it’s only recently become viable it’s not through any advance in the charging technology. Instead, it’s the fact that modern devices can subsist on low wattages, down around 5 watts, that can make this kind of charging possible.

Although it may sound a little pointless at first, PowerPot has a huge number of applications. It’s way more reliable than solar power, making it optimal for charging or power devices at night. Beyond charge, it provides the necessary function of a pot, making it a zero-cost proposition to use the PowerPot instead of a normal one (assuming you have a PowerPot). Making it even more zero-cost to use is the fact that using PowerPot to generate some electricity isn’t going to diminish the other uses of your fire as lighting or warmth. PowerPot just makes use of what would be waste heat otherwise.

Obviously this could be helpful for hikers or campers who just need to stay connected, but the really important application would be for those in developing countries where cellphone use is more widespread than reliable access to electricity, the latter requiring significant, expensive infrastructure; power lines don’t just grow. Many of these people already make fires for cooking, and the PowerPot would allow them to get bonus electricity with no added trouble.

Likewise, the PowerPot could be helpful to anyone during a power outage when electricity is out, but the gas is still on.

PowerPot isn’t being produced full scale just yet, but they do have a Kickstarter. (Who doesn’t nowadays?) If you pledge $99 or more, you can get your own PowerPot when they scale production. There’s a variety of models available at higher price points as well, and once you get into the $175 range, you’ll be buying one for yourself and another for a family in need. It may not be the most revolutionary step forward in energy technology, but the PowerPot is just the kind of innovative solution we need to make our increasingly power-hungry lives possible and sustainable.