The Surprising Origins of Wonder Woman

Today, Wonder Woman is viewed by many as a feminist icon. But as Wonder Woman’s popularity endures, the actual women who shaped and inspired the comic book character are often overlooked—including Margaret Sanger.

Sanger is known as the founder of Planned Parenthood, although she viewed that name as euphemistic and preferred the organization’s original title, the American Birth Control League. In the early 20th century, after watching her own mother suffer through 18 pregnancies and witnessing the dangers of back-alley abortions first-hand in her job as a nurse, Sanger took bold action for contraceptive rights.

She violated postal obscenity laws to distribute a monthly newsletter promoting birth control (with a slogan Wonder Woman would approve of: “No Gods, No Masters”); opened the first-ever birth control clinic in the United States in 1916, alongside her sister Ethel Byrne; and prompted a decisive court battle that, finally, in 1937, ended the federal ban on contraception. In other words, Sanger got shit done, and drastically altered the national conversation surrounding women’s reproductive rights. Unfortunately, she was also a supporter of eugenics—at least for part of her life—and often used arguments and language associated with eugenics in her writing.

PBS has an informative breakdown of Sanger’s confusing relationship with eugenics (a relationship that some anti-abortion activists exaggerate to discredit Planned Parenthood). They note that Sanger’s support of eugenics may have been strategic, designed to give the contraceptive movement more credibility by aligning it with popular eugenics ideals. Many historians believe she actually opposed the eugenicist theory that poverty was hereditary, arguing instead that environmental factors led to social struggles.

Nevertheless, Sanger remains a controversial figure today, 50 years after her death. But during her lifetime, she enjoyed vocal support from a surprising source: Wonder Woman creator William Moulton Marston.

Marston was a contentious figure in his own right. He worked as a psychologist, screenwriter, lawyer, entrepreneur, and polygraph developer before turning to comics, and was the center of a national scandal in 1922.

Marston was an expert witness in a controversial landmark case, Frye v. United States, in which he attempted to use his polygraph technology to clear the defendant James Frye of murder allegations. The same month as Frye’s appeal, Marston was arrested by federal agents and charged with fraud for allegations relating to his role as treasurer for the Boston firm United Dress Goods. Marston was eventually cleared, but not before his reputation had been tarnished. The charges cost him his job as chairman of the psychology department at American University, and, by discrediting an expert witness in the Frye case, may have also cost James Frye his freedom.

Despite the controversies that plagued Marston’s career, his personal life was even more scandalous — at least for the time.

The Wonder Woman creator lived and wrote in a sprawling house in Rye, New York that he shared with his wife, Elizabeth Holloway Marston; his lover, Olive Byrne; his children from both Holloway and Byrne; and, occasionally, his other lover, Marjorie Wilkes Huntley.

Judging by their journal entries and correspondence, Byrne, Holloway, and Marston had a relationship that, although sometimes unbalanced in Marston’s favor, also offered all three partners freedoms they might not have had in a monogamous marriage. It’s not known whether Elizabeth and Olive were lovers with each other in addition to Marston, but given they remained inseparable until Olive’s death in the ’80s, it seems likely.

The three partners kept their unusual dynamic a secret by telling everyone who asked—including both women’s children—that Byrne was Holloway’s widowed sister. Byrne was also the niece of the famous Margaret Sanger, but, to hide Byrne’s true identity in order to sustain the family’s pretense of monogamy, this had to be kept secret. In fact, Sanger was more than just Byrne’s aunt; she was also her savior. After Byrne was born, her father drunkenly threw the baby into a snowbank, and Sanger rescued her. 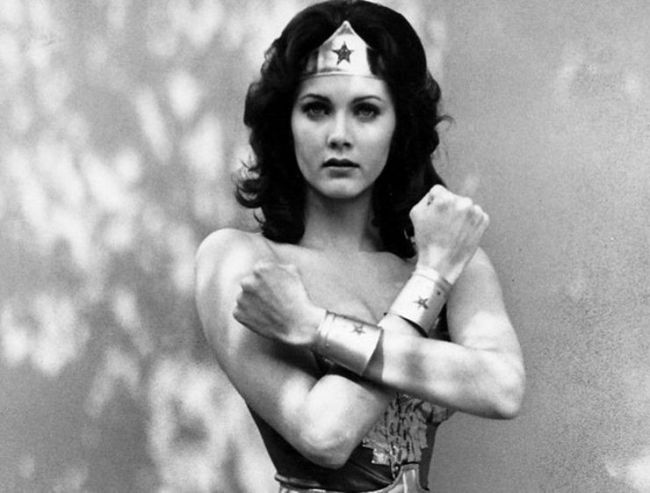 In the early 1940s Marston decided to pursue writing for comics, and turned to the women in his life for inspiration. Holloway reportedly encouraged Marston to create a female superhero, saying  “Come on, let’s have a Superwoman! There’s too many men out there!”. Byrne inspired Wonder Woman’s iconic look; Wonder Woman’s Bracelets of Submission are based off bracelets Byrne always wore. Huntley provided some of the lettering and inking.

Sanger was a massive influence on the character, too. Despite having to keep their family connection secret to hide Byrne’s true identity, Marston had always been one of Sanger’s biggest fans—in 1937, he even called a press conference in which he announced that a matriarchy was ‘inevitable,’ and declared her the second most influential person in the world. When Wonder Woman debuted in 1941, Marston proclaimed “Frankly, Wonder Woman is psychological propaganda for the new type of woman who should, I believe, rule the world.”

That “new type of woman” was modeled to a large extent off feminist texts from the early 20th century, including Sanger’s book Woman and the New Race, which championed sex-positivity and contraception (and, unfortunately, some arguments from the eugenics movement). According to Jill Lepore, author of the 2014 book The Secret History of Wonder Woman, “The philosophy of Margaret Sanger’s Woman and the New Race would turn out to be the philosophy of Wonder Woman, precisely.”

Although Wonder Woman didn’t explicitly support any of the eugenics theory from Woman and the New Race, it’s worth noting that Marston did cite works by eugenicists in his other writing. In Marston’s treatise on sexuality, Emotions of Normal People, he cites works by Havelock Ellis (Sanger’s lover and vice-president of the Eugenics Education Society), as well as Harland William Long’s Sane Sex Life and Sane Sex Living (published by the Eugenics Publishing Co., Inc). Marston was also a firm opponent of interracial marriage, and although his Wonder Woman stories sometimes depicted people of color, they were typically racist caricatures. One particularly terrible example, Wonder Woman #19, featured a fictional African nation allied with the Nazis.

Marston’s admiration for Sanger, and his sympathy with the struggle for contraceptive rights, may have been evident in some of Wonder Woman’s symbolism. Wonder Woman was constantly shown chained, gagged, and mid-spanking in Marston’s comics, causing DC’s editorial board to lament the series’ kinkiness. 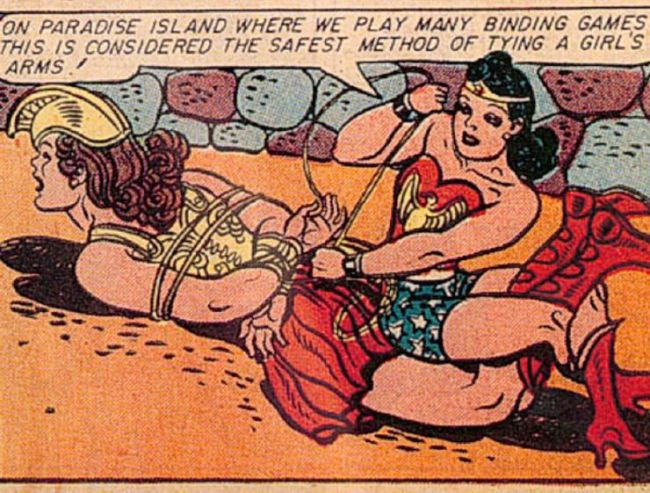 That frequent bondage was an expression of Marston’s theories about female eroticism and the importance of learning to love submission. But Jill Lepore argues that it was also an homage to the imagery of activists like Sanger: “Marston, Byrne and Holloway, and even Harry G. Peter, the artist who drew Wonder Woman, had all been powerfully influenced by the suffrage, feminism and birth control movements. And each of those movements had used chains as a centerpiece of its iconography.”

RELATED: 5 Comics So Perfect We Hope They Never Get a Movie Adaptation

Marston and his family clearly considered Sanger’s philosophies to be crucial to the Wonder Woman ethos. In 1944, an ailing Marston hired nineteen-year-old Joyce Hummel as an assistant. To help Hummell prepare to write Wonder Woman, Marston’s family gave the young writer two books: Marston’s Emotions of Normal People, and Sanger’s Woman and the New Race.

Marston passed away in 1947,  and the women who contributed to Wonder Woman’s story—Holloway, Byrne, Huntley, and Hummel directly; Sanger by providing inspiration for Marston and his collaborators—no longer had a say. DC assigned Wonder Woman to Robert Kanigher, despite protests from Marston’s family, and Kanigher reduced her from a powerful Amazon into a ditz desperate to marry Steve Trevor. 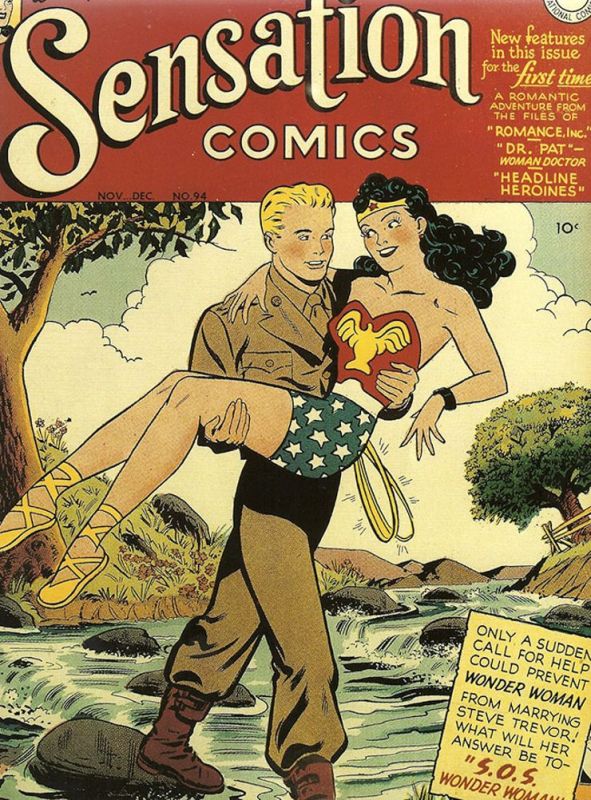 In the years since, Wonder Woman has received countless adaptations both great and terrible. Provided the live-action Wonder Woman film manages to improve on Batman v Superman: Dawn of Justice (which, let’s be honest, shouldn’t be hard) she stands to become an even more influential character. As her popularity grows, it’s important to remember the unabashedly political spirit Wonder Woman was created in — the same spirit that brought us Planned Parenthood.