The first batch of Portal 2 downloadable content has finally, finally arrived. The catch? You need a $140 controller if you want to play it. The upcoming third-party DLC pack developed by Sixense Studios touts a whole bunch of new features including the ability to rotate portals and even rescale the size of objects. Apparently, however, this is not something that can be done with a simple mouse and keyboard or dual shock controller and instead requires the Razer Hydra, a motion controller similar to a Wiimote or a Move; except in price. Luckily, it comes with a copy of the DLC.

Back in January Razer announced it the Hydra and it’s connection to Portal 2, intending to release the controller, with it’s own extra-level-laden version of Portal 2, presumably around the game’s original launch window. That didn’t happen. Razer also reported they were trying to keep the price below $100. Unfortunately that doesn’t seem to be the case either. While the price doesn’t help, it may be the delay in release that could really hurts Razer’s sales. Paying for a peripheral alongside the game that supports it is one thing, paying for it in order to play some after-the-fact DLC is a completely different value proposition.

Yet another factor in the situation is that even if you’re chomping at the bit to shell out for the Hydra, it might be difficult to get your hands on. (Get it?) Currently, it’s available through Steam for North Americans, marking Steam’s foray into hardware sales, but anywhere else and you get an error message. But who knows, you might need that time to think.

The Hydra itself and some Hydra-enabled footage below. 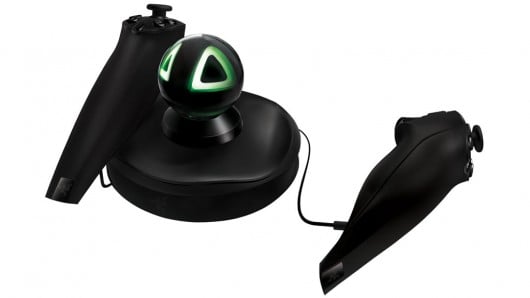