What Are the Most Popular Pokémon Around the World?

Which Pokémon has top ranking in your country? 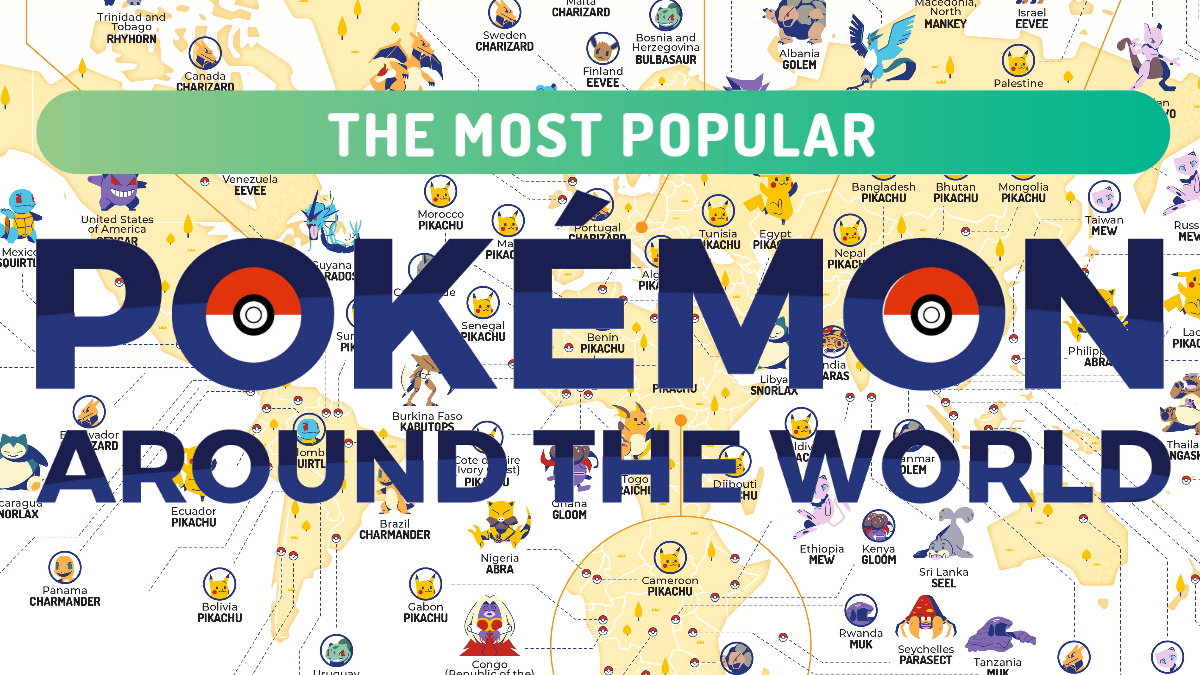 As to be expected with the 25th anniversary of one of the most beloved franchises across the globe, fans have been coming up with creative ways to celebrate all the little critters they’ve spent decades trying to catch. Of course, the Pokémon brand has been showering fans with all kinds of announcements, but it’s worth highlighting fan projects, too.

Enter TheToyZone, who you might remember from their Disney villainous take on Polly Pocket. The toy review site is blasting off again with a fun Pokémon project that looked at Google search data to find out which Pokémon was the most popular all around the world.

In celebration of Pokémon’s 25th anniversary, we looked at how fandom of the series varies around the world. We analyzed Google search data to identify the most uniquely popular Pokémon in each country.

Based on the first generation of Pokémon (so the original 151), TheToyZone sent over a map along with a breakdown of which Pokémon was most popular in various countries. My fangirl imagination likes to think that if Pokémon existed in real life, these are the countries I’d have to go to in order to catch certain breeds. Unsurprisingly, Pikachu would have a home in nearly any country, after all, who hasn’t enjoyed watching the bond between the adorable electric mouse and Ash Ketchum? That being said, I wouldn’t mind traveling to the likes of Italy for a Charizard, and heading out to Argentina for a Bulbasaur isn’t a terrible fate, either.

To make it easier, the folks over at TheToyZone were nice enough to provide maps of ALL the continents they researched, complete with a breakdown of which Pokémon is the most popular in each space. 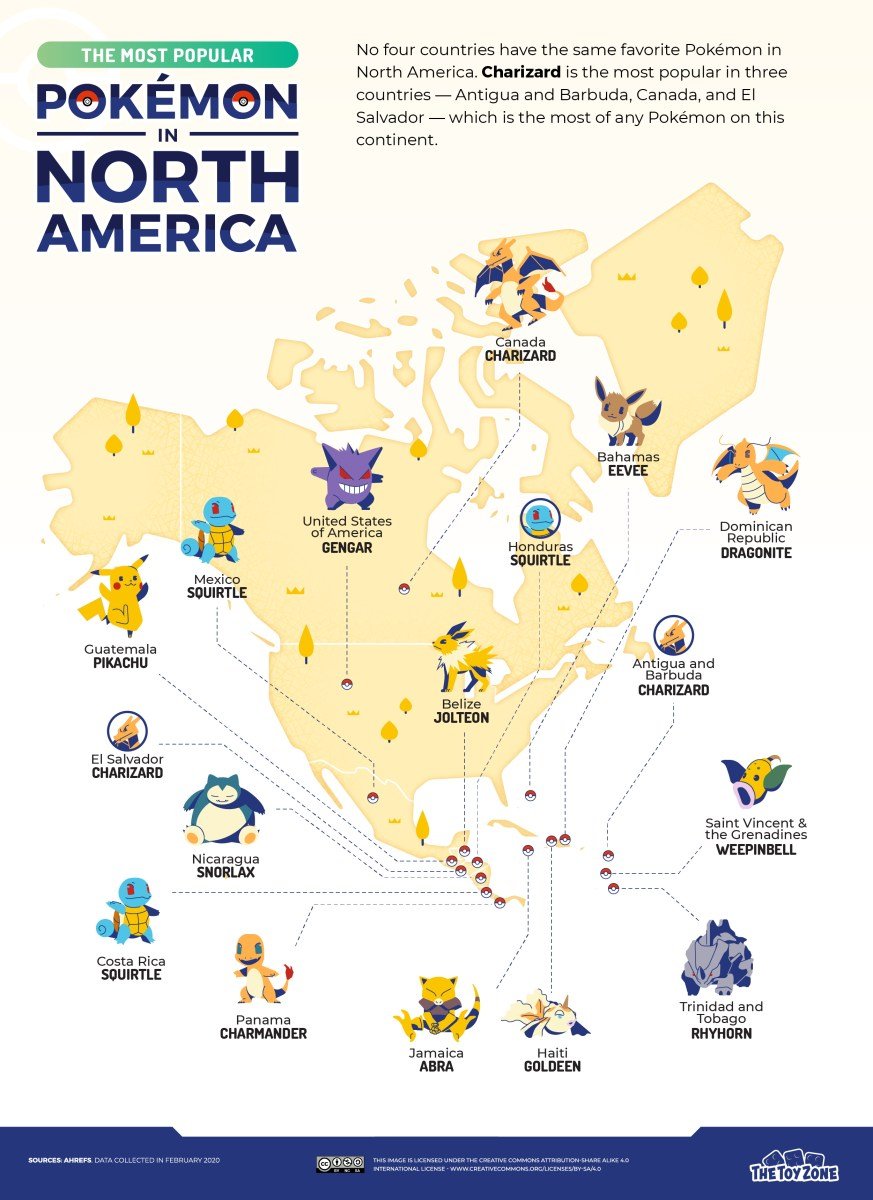 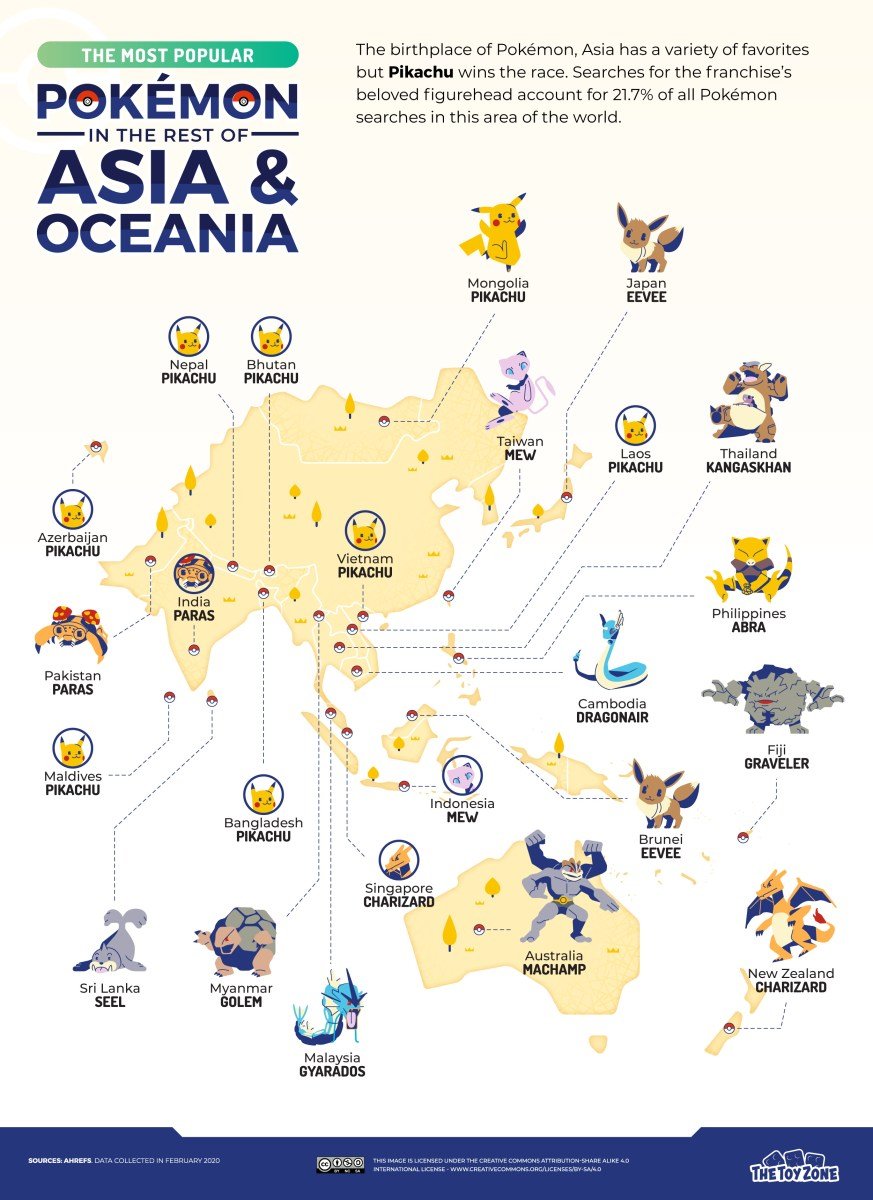 TheToyZone also took the data to illustrate the order the original 151 would be in today based on their popularity all around the world. There’s a poster below. To determine the most popular Pokémon in each country for the maps, we used Google Search volume data to identify the Pokémon ranked highest above the global search average.

To determine the most popular Pokémon for the poster, we identified the global search volume for each Pokémon. Data on Google search volume came from the Ahrefs Keyword Explorer tool and was collected on February 2021.

I gotta agree with TheToyZone here, I’m surprised that Bulbasaur isn’t in the top 10? And how is my sunglasses-wearing water boy Squirtle at 16? He showed up with an entire gang, that should automatically give you a higher ranking! I also imagine that Jigglypuff’s ready to take a permanent marker to someone’s face for being at #23.

That being said, I really love how fans take real-world statistics to share their passion for a property. Thanks to TheToyZone I was able to think about the possibility of traveling the way Ash and his friends do in the search for new Pokémon. Granted, I don’t think I’d be able to justify a trip to Taiwan for the chance to maybe catch sight of Mew, but hey, a fangirl’s gotta try, right?

Which country would you go to in the hopes of catching one of the original 151 Pokémon? Be sure to let TheToyZone know via Twitter or Instagram!