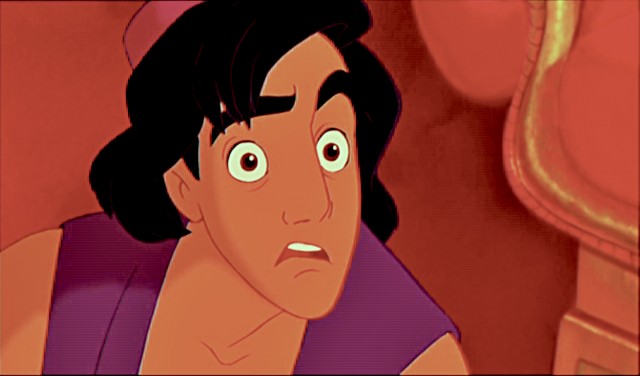 As Donald Trump continues to whip the Republican base into a xenophobic fury, the disappointing polling results continue to come in—not the least of which that 54% of Republicans support Trump’s proposed ban on Muslims (or that any percent of humanity supports Trump). No, the latest disappointment comes in relation to the fictional country of Agrabah.

When Public Policy Polling asked 532 Republican primary voters whether or not they supported bombing the fictional nation of Agrabah from Disney’s Aladdin, fully 30% of them would really like to find out if animated sand glows in the dark. Here’s the breakdown of the responses:

Aladdin: “Do you trust me?”

I can’t decide between being appalled by the responses and wanting to high five the person who came up with this question. Is the 57% undecided comforting, or would those who know Agrabah isn’t a real country would be in the definite no column, making 57% undecided downright sad? It should be noted that the question was also asked to Democrats, but they oppose the pretend bombing, despite far too many still being in favor.

I don’t know how they propose to go about this revolutionary plan for world peace, but one thing’s for sure:

What crime has Agrabah perpetrated? Well, aside from pet monkey abuse and a sultan who takes way too long to realize he can change his country’s laws, my guess would be “sounding Middle Eastern.” However, if you want something truly horrifying to wake you up today, check out some of the responses to the fact-based questions on the poll.