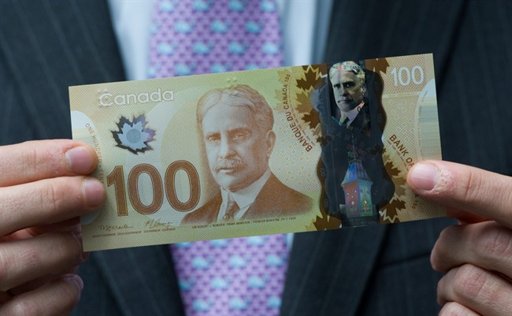 Starting in November, Canada will be seeing some new, plastic currency making its way into circulation. The Bank of Canada lists a couple of reasons for this change, one of which is to combat counterfeiting. New bills will have a number of security measures including the good old fashioned transparency check in addition to some other presumably new ones that were not explained in detail. Big surprise.

Another bonus is the plastic currencies’ increased durability and lifespan. The new polymer bills are estimated to last 2.5 times longer than cotton-paper bills and although they fold and crease, they don’t rip. Yahoo!News quotes Bank of Canada Governor Mark Carney as saying:

“The polymer notes we’re introducing today are unique, There’s simply no other currency like them.”

The first plastic bills to be introduced will be the 100 dollar note in November and the 50 following in March. Although there are plans to replace the 20s, 10s and 5s, those designs have not been revealed. Aside from being polymer based, the new 100 dollar note will also feature some new designs celebrating advances in medicine such as insulin, the pacemaker and even robot-assisted surgery. Overall, the Bank of Canada is shooting to have all the new bills in circulation by 2013. Now someone just has to start working on Canadian coins that I won’t keep trying to put in U.S. vending machines.

Check out a clip from the unveiling if you want to see these bad boys up close and personal.