First Planet With a Tail Discovered By NASA 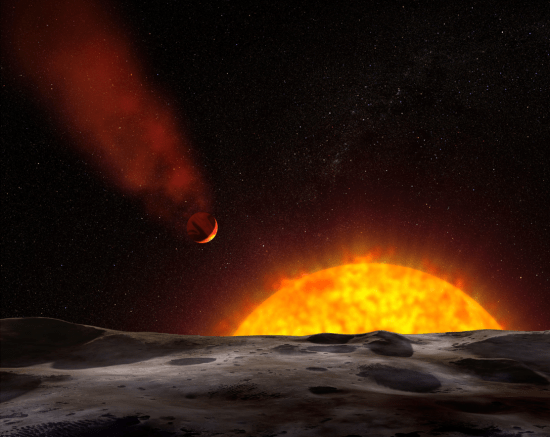 Scientists at NASA have found the first documented planet to sport a comet-like tail. The planet is 153 light-years from Earth, weighs slightly less than Jupiter (start that diet, Jupiter!), and its tail is comprised of gas caught up by the stellar wind traveling at possibly tens of thousands of miles per hour.

The planet, cleverly named HD 209458b, may be most similar to Jupiter among planets in our solar system, but it’s far closer to its home star, and thus much more like a devastating, scorched fireball in orbit. And what a speedy orbit. The tailed planet makes a full rotation around its home star in only 3.5 days, while Mercury, the planet with the shortest orbit in our solar system, takes a full 88 days.

And while it certainly isn’t helping the planet to be so close to its sun, the deteriorating effects are incredibly slow. That said, in trillions of years the planet will literally evaporate into thin air, minus the air.

“Since 2003 scientists have theorized the lost mass is being pushed back into a tail, and they have even calculated what it looks like,” said astronomer Jeffrey Linsky of the University of Colorado in Boulder, leader of the COS (Cosmic Origins Spectrograph) study. “We think we have the best observational evidence to support that theory. We have measured gas coming off the planet at specific speeds, some coming toward Earth. The most likely interpretation is that we have measured the velocity of material in a tail.”

Some coming toward Earth!? Well, he doesn’t seem panicked, so I won’t be either. But I can’t shake the feeling that, the more we discover, the most the real universe parallels Super Mario Galaxy.