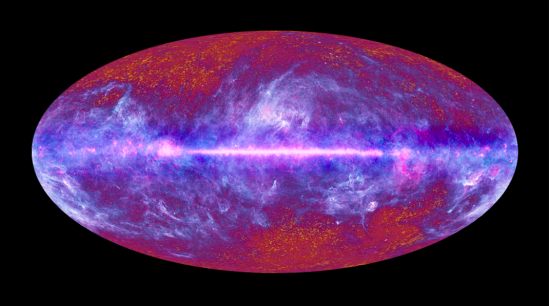 Today, the European Space Agency has released a stunning all-sky image taken by the Planck Space Observatory over the course of about six months. Planck combines the work of two highly sensitive instruments, the High Frequency Instrument and the Low Frequency Instrument, which detect wavelengths between 100 and 857 GHz and between 30 and 70 GHz, respectively, to form a complete picture of visible and invisible light in our cosmos.

The purple band in the center of the image, which represents the main disc of the Milky Way Galaxy, may be the immediate eye-catcher, but it’s what’s going on at the peripheries that is potentially of more interest: The Cosmic Microwave Background Radiation.

The main disc of our Galaxy runs across the centre of the image. Immediately striking are the streamers of cold dust reaching above and below the Milky Way. This galactic web is where new stars are being formed, and Planck has found many locations where individual stars are edging toward birth or just beginning their cycle of development.

Less spectacular but perhaps more intriguing is the mottled backdrop at the top and bottom. This is the ‘cosmic microwave background radiation’ (CMBR). It is the oldest light in the Universe, the remains of the fireball out of which our Universe sprang into existence 13.7 billion years ago.

The Planck mission is scheduled to conclude in 2012, by which point it will have taken three more full-sky scans.

Click on the image above to see it fully-sized.

(ESA and BBC via Slashdot)