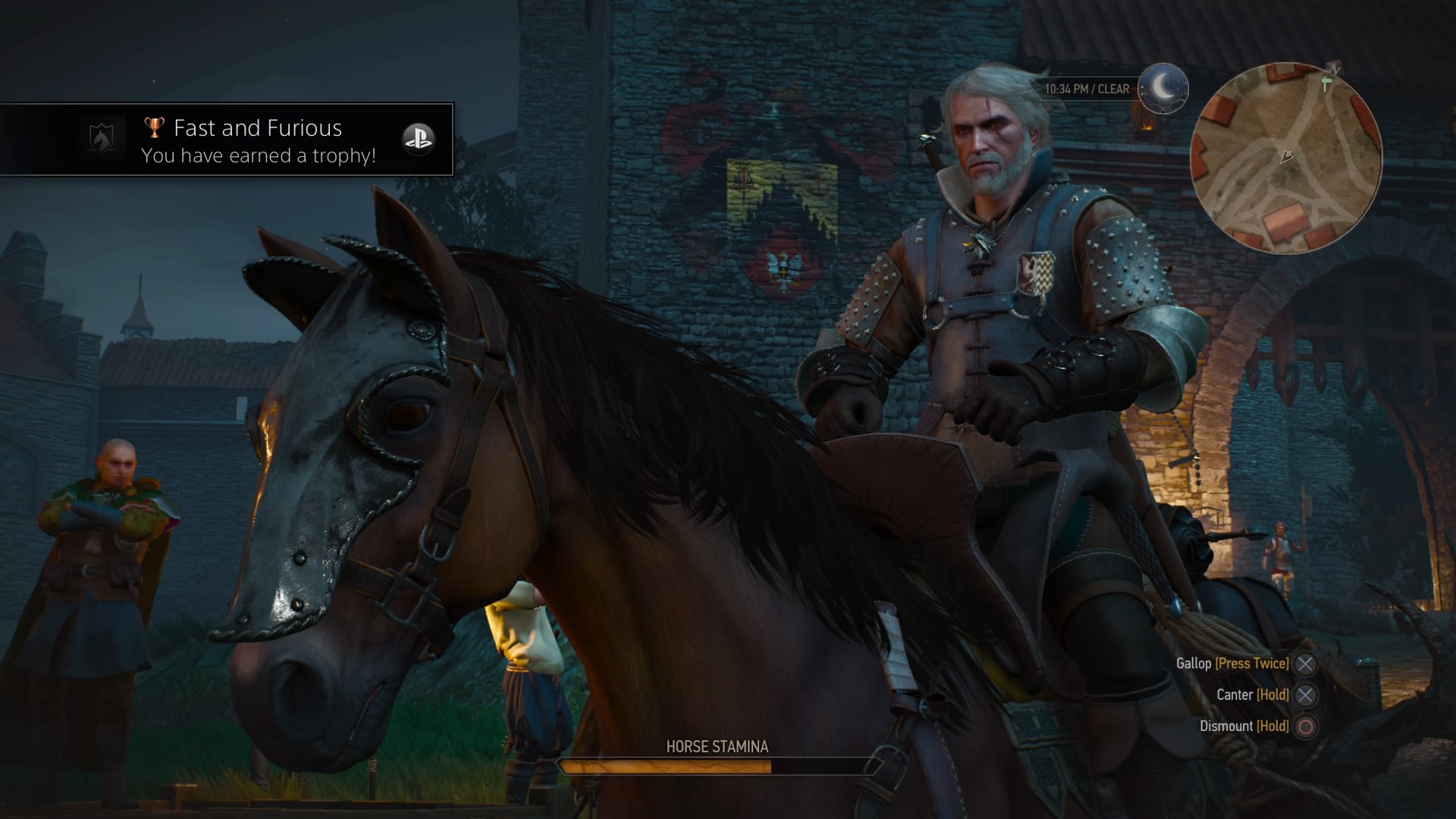 Worldbuilding is an important part of any genre setting–it’s what makes a fictional world look and feel like a real place and adds to the richness of the experience. Worldbuilding is both the micro and macro of a world: its history, its politics, but also smaller things like food, music and yes, the clothing that its inhabitants wear. Most video games utilize worldbuilding through things like the architecture, atmospheric storytelling, and lore (usually through books and journal entries). But fashion is an important part of worldbuilding too, especially in a visual medium. And while you can find tons of information on why a studio chose a particular architectural style for a game, rarely do you see the same discussion for the clothes.

I recently finished up the sprawling fantasy RPG The Witcher 3: Wild Hunt, and what struck me most about the game is how odd its clothing is. It’s a perfect example of why this sort of thing is important when trying to create a believable fictional world. And believability is a huge part of The Witcher‘s brand. This is a game series that prides itself on how organic its storytelling is, with choices being felt in-game pretty much instantly, and NPCs that act more like “real people” than those in other RPGs. But the clothing in Witcher 3 can be best described as inconsistent. While the game does do some interesting things with its fashion, it doesn’t do them in a way that felt organic or consistent, especially when it comes to its female characters and NPCs. Triss Merigold’s default outfit appears to have detachable sleeves with points (it probably attaches at the back).

That doesn’t mean the game never does anything well, however. I loved how a lot of the costuming is made up of separate pieces that are tied together, like sleeves tied to a bodice, because that is “historically accurate.” Now, a game doesn’t have to be historically accurate in its clothing, particularly a fantasy game, but this is more of a way of showing what level of technology a place has. Sleeves in the Western Medieval and Renaissance periods were often separate garments, tied to the bodice or doublet with points, and which meant sleeves could be swapped out easily. This is because, obviously, people didn’t own washing machines or as many items of clothing as we do today due to mass production, so it allowed people to switch up their look easily, and even keep up with trends (the Renaissance had a LOT of sleeve trends). You can see the points clearly on some of the women who are wearing gowns in Witcher 3. This tells us something about the world–that even though this is a place with magic, most people are probably washing their clothes the old fashioned way. 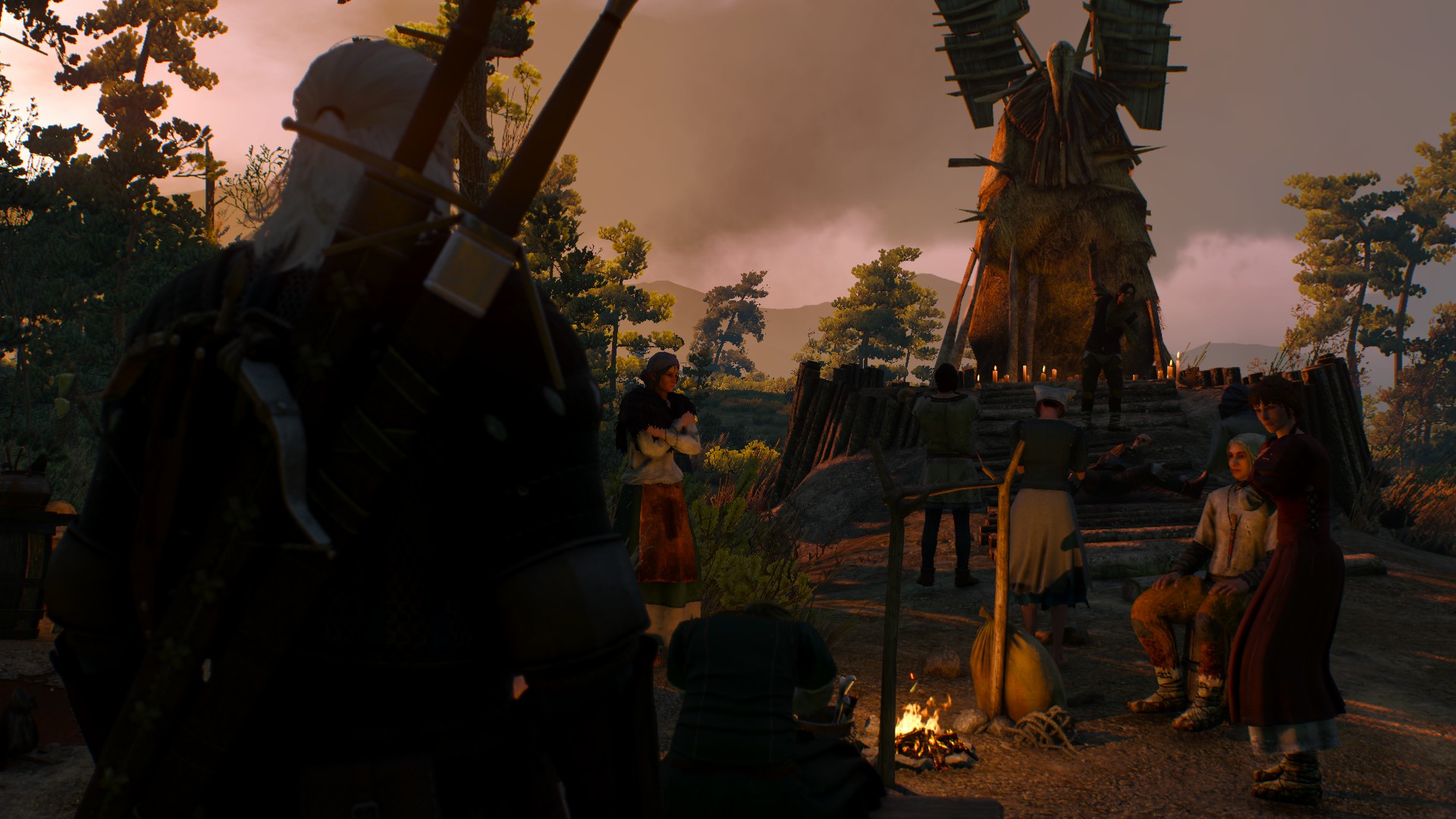 A particularly well dressed batch of commonfolk in Witcher 3.

I also like how, for the most part, peasants are dressed like they are peasants, often in literal rags, particularly in Velen, which has been torn apart by war. It tells you how bad the toll of the war is on the most vulnerable residents in this world. There are not lords to protect them, and the war itself has torn up the landscape, leaving peasant farmers poorer than ever. However, sometimes it felt like these rags didn’t make much sense for the climate, which I think is supposed to be on the colder side. Like, what was up with those weird diaper rag shorts so many men were wearing? They were ever-present and very strange. 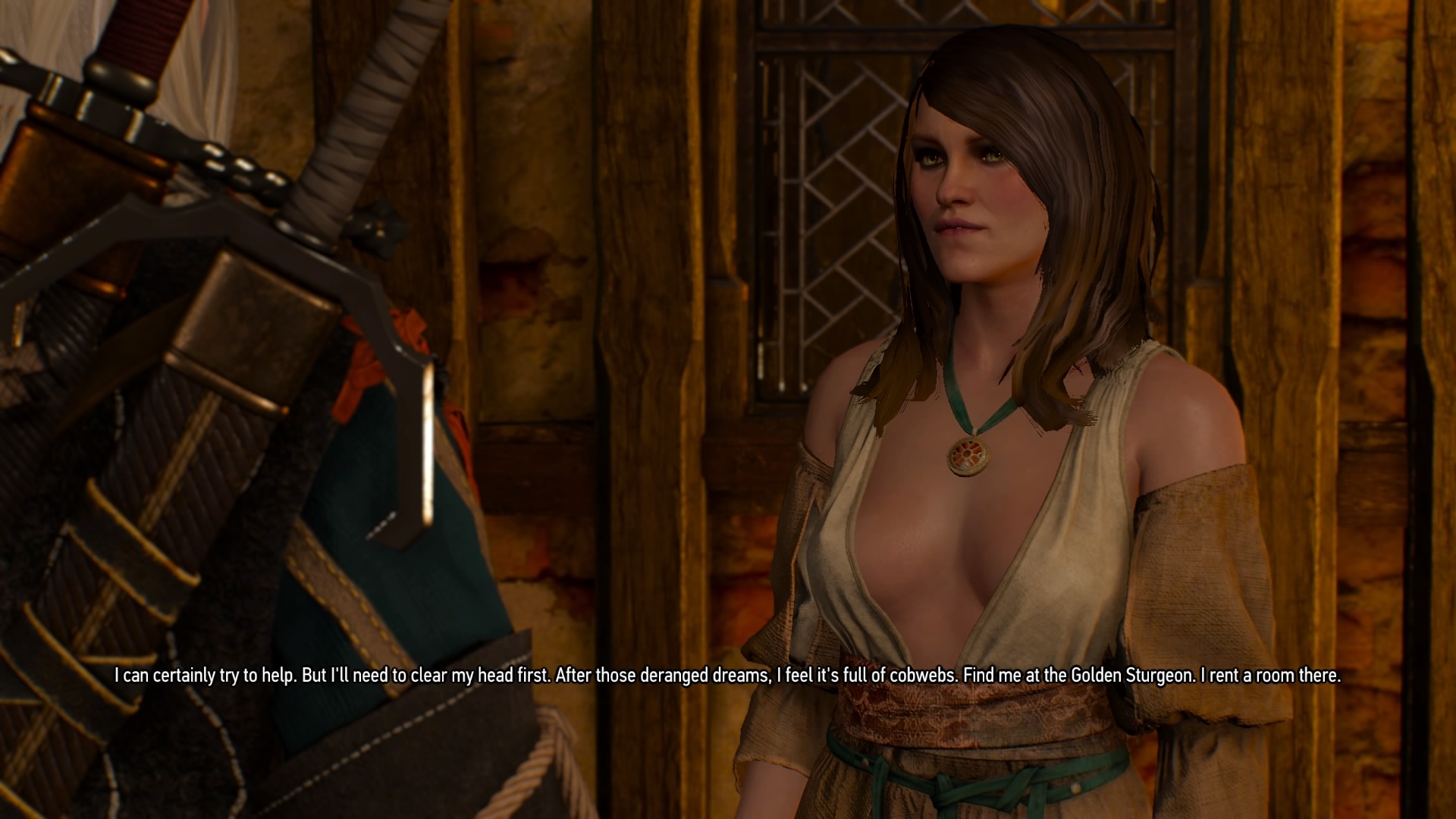 Corinne Tilly is one of many secondary female characters who suffer from “hot boob disease” in the Witcher universe.

But the game’s clothing inconsistencies are most obvious when it comes to dressing its female NPCs. The women who are closest to Geralt are dressed like human beings, with their own personal styles and preferences, but other women in the game do not get the same treatment. The most egregious example of this is Ves. She is a solider, and yet for some reason, the entire top half of her armor isn’t laced up. No one else in the Blue Stripes is dressed this way. This woman is an accomplished sniper, and yet this is how they dressed her. All of the sorceresses who aren’t Triss or Yennfer are dressed similarly. The most powerful women in this world, and the way they are dressed almost seems to undermine that power by treating them like sex objects. You could make the argument that they’re dressed this way to show how much the sorceresses as a group don’t care about the usual societal mores due to their magical power and increased lifespans, but that is me giving the game entirely too much credit. It’s simply not done consistently enough for that to be the case.

Unfortunately, this is part of a trend among games: while main female characters are often less sexually objectified than in the past, secondary ones are not. And Witcher 3 doesn’t even do it consistently, so you can’t even make the argument that “oh this is how women dress in this world” because the majority of them do not. Furthermore, male NPCs often seem to have more thought-out clothing choices than most of the women in this game, and it’s glaringly obvious that extending that consideration to more of the women just wasn’t a priority. I think those upper arm things are supposed to be bracers, but otherwise Ciri has no protection in a fight.

Even Ciri isn’t entirely free from this trend. While the Witcher armor choices for Geralt are for the most part well-designed, Ciri doesn’t get any, even though she has been trained as a Witcher and a swordswoman. It’s odd because again, this isn’t always the case for other female characters in the game (like Rosa var Attre). It’s not even the case for Ciri throughout the game either, as she gets a padded coat and a leather breastplate in the beginning tutorial when she is a child. I even got her alternate outfit, and while it does have actual armor in it, it is also a crop top. Most people are wearing very realistic armor sets–there’s no tromping around in a set of full plate for the most part. Only people of fairly high status are seen wearing plate. Witcher armor is always light armor, even the heavier sets like the Bear School armor, because that’s what Witchers need to fight in their style, which involves a lot of movement. 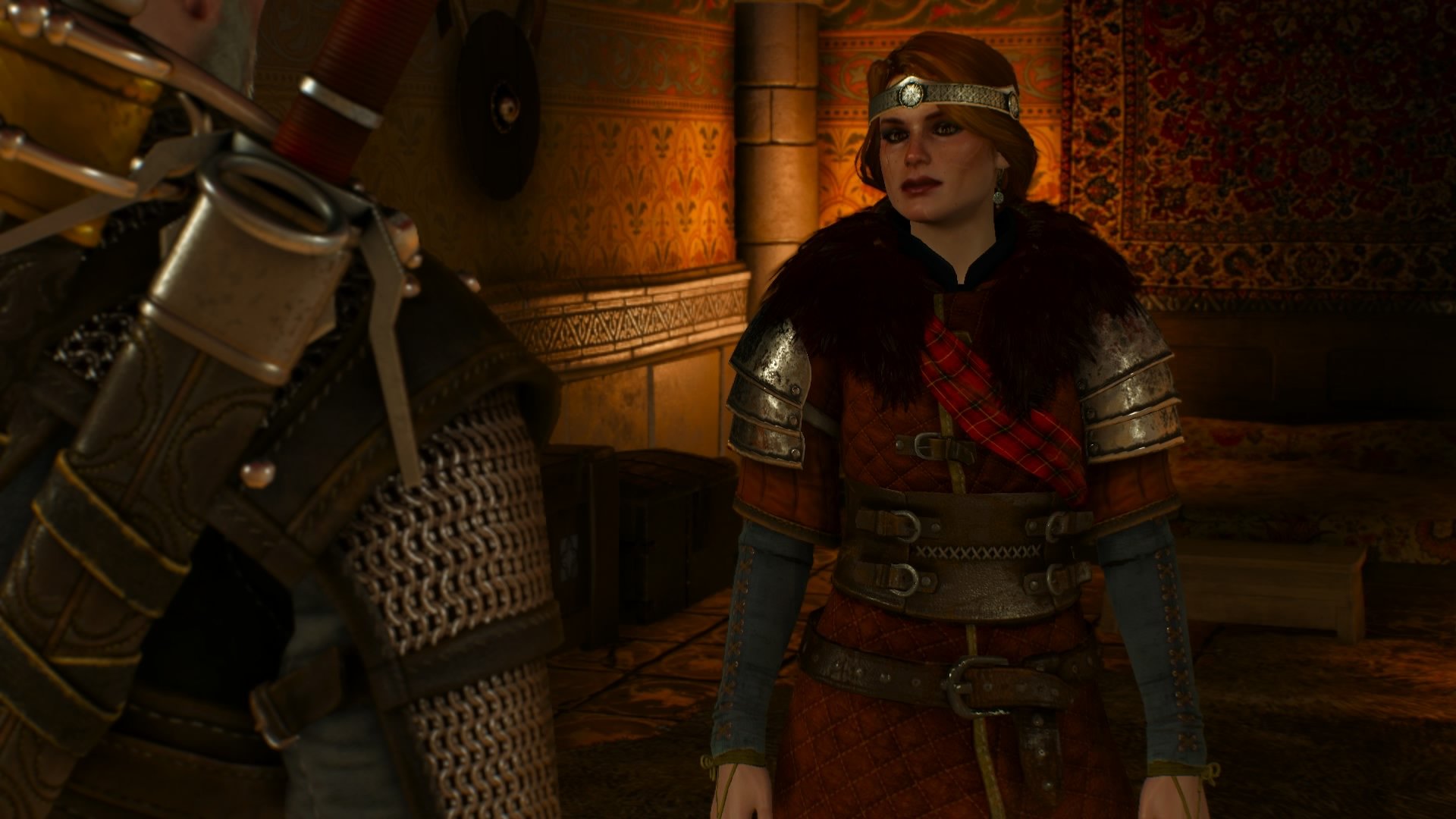 Cerys is a good example of the Skellige look, and has one of the stronger costumes in the game.

Then there’s the fact that there is no discernible regional style to many of the places you travel, most especially when it comes to what women are wearing. Velen and Novigrad’s fashion sensibility is for the most part an odd mishmash of Medieval and Renaissance styles, with no real concern for regional culture or even geography. Novigrad has a lot of foreigners who live there, which would account for some of the variety, but because none of that work had been done in the rest of the game, it weakens the message and Novigrad doesn’t really come across as a rich cosmopolitan port city as a result. Skellige, on the other hand, is much more consistent, and tells you a lot more about the islands and the people who live there. Skellige fashion is much different than it is on the continent, which makes sense, with much longer tunics and a lot of tartans. This emphasis on a Scottish/Scandinavian design to the clothing tells you what you need to know about the place right away: cold, clannish and uninfluenced from the troubles happening outside of the islands, which bears out in the plot. (Pun intended for anyone who has played the game.) I haven’t had the opportunity to play the “Blood And Wine” DLC yet, but from what I’ve seen of it, Toussaint also has a very strong signature style as well. So I know the developers are capable of consistency, they just largely chose to deprioritize it.

There is a lot I felt the devs could have done with clothing in Witcher 3. For instance, what influence does the rise of the cult of the Eternal Flame have on the fashion of Novigrad? Do people dress more conservatively, or in the colors of the order to show their allegiance or gain favor with them? What exactly is this world’s deal with unattached sleeves that would never stay up in real life? Is that literal magic? Is women wearing trousers a normal part of the world, or the exception? I really couldn’t tell. But the game rarely does anything consistently enough with its fashion for it to feel intentional, and as a result is often confusing, even ugly. And a video game, especially a fantasy video game, has room to do so much more than that.

Megan Patterson is a freelance writer and the science and tech editor at Paper Droids, a feminist geek culture site for women. You can also find her on Twitter crying about how good Dr. Beverly Crusher’s hair is.