If you're getting sentimental for derogatory terms, it's time to check your privilege. 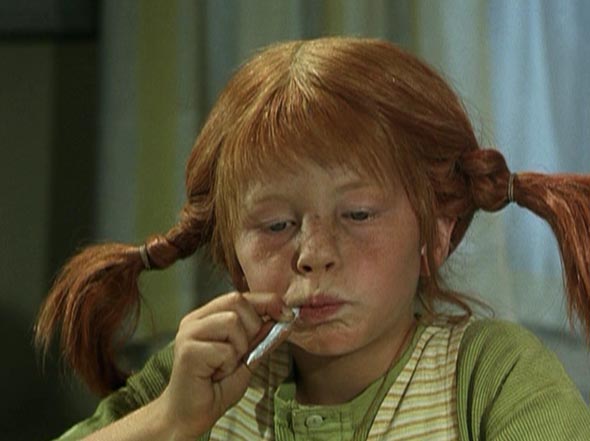 Pippi Longstocking, the independent and preternaturally strong (she can lift a horse one-handed, everyone!) heroine of Astrid Lindgren’s books and a 1969 TV show, helped popularize “girl power before it was known,” according to Lindgren’s grandson, Nil Nyman. And now the nine-year-old, a cultural icon in Sweden since the first book was published in 1945, has received a much-needed modern update to remove racial slurs and reflect Sweden’s diversity—and fans are not happy about it.

As The New York Times explains, the Swedish broadcaster SVT announced in September that two scenes would be edited before airing on national television this Saturday and in a newly restored DVD of the series. In one, Pippi’s reference to her father as “king of the Negroes” has been removed. In another, “Pippi no longer pulls her eyelids upward, pretending to be Asian, yet still sings a mock Chinese song.”

Those might seem like two relatively minor edits (considering the show originally aired in 1969, I expected the need for a larger overhaul) but literally thousands of Pippi fans, many of them respected Swedish journalists and educators, strongly disagree. Swedish playwright and novelist Jonas Hassen Khemiri isn’t surprised by his country’s reaction: “When it comes to feminism, we’re better; when it comes to racism, we’re behind.”

Erik Helmerson, a columnist at Stockholm daily news outlet Dagens Nyheter, criticized the edits as censorship: “I’m very sensitive to the fact that people are offended by the N word […] I’d never use it myself.” But he views SVT’s decision as “a huge interference into freedom of speech […] Where do we draw the line? What do we cut and what do we keep? Who should decide? Who needs to be offended before we cut a word?”

Nyheter isn’t alone in opposing the edits; according to The Times, “When the country’s leading daily, Aftonbladet, took a poll on Facebook asking, ‘Is it right to remove the racist parts from Pippi Longstocking?,’ 81 percent of the first 25,000 responses said no.” According to SVT’s head of development, initial responses on social media to the broadcaster’s announcement were “hateful.”

That backlash is a little surprising, considering that both Lindgren (who passed away in 2002) and her estate have also criticized the problematic elements of Pippi. Lindgren apologized for the slurs in 1970, (just one year after the original series was released), saying she “didn’t mean to offend.” Her estate approved of SVT’s changes, and made edits in 2006 to the book’s introduction that place the slurs in context without covering them up—acknowledging and accepting some responsibility for a history of racism while simultaneously condemning it.

The family added a preface explaining that today, the word is considered “offensive,” but that when the books first appeared, “Negro was a common expression for people with black skin who lived in other parts of the world than ours.”

It continues: “Almost no black people lived in the Nordic countries, very few Swedish children had seen any in real life, and television didn’t exist here. Negroes were something exotic.” The preface points out that nowhere in the books is Pippi seen “acting biased or prejudiced.”

Some fans, such as Stockholm elementary-school teacher Kristina Belter, have criticized SVT’s changes as disingenuous, and wish the network had followed the example of the book’s preface: “I think Astrid Lindgren’s books are like a part of our culture, so I can understand why they did it […] But if you leave it as it was, it can be an opportunity to discuss these things with children, about the difference between then and now.” But that’s placing a dangerous amount of faith on the power of context to save non-white viewers (primarily children, remember) from being made to feel like The Other. As SVT Head of Development Paulette Rosas Hott says, “We live in a Sweden that is multicultural, and the kids should feel included in what we broadcast.”

I recommend reading The Times article for a more in-depth look at problematic characters originally intended for children that have since become outdated cultural icons, such as Tintin. (American readers will be all too familiar with that phenomenon already—heck, look at most early Warner Bros. cartoons.) Sweden’s edition of the Pippi Longstocking books is in fact now more politically correct than the U.S. version, which hasn’t changed since the 1950s—Pippi’s father is still referred to as “king of the cannibals” on a South Sea island.