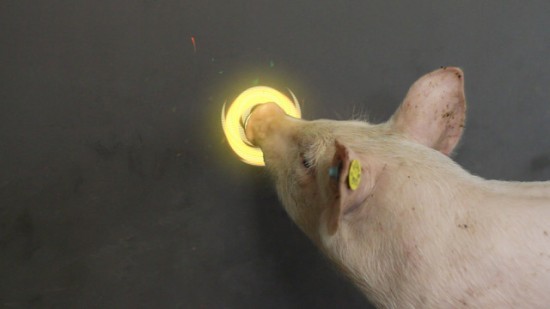 Pig Chase is a co-op video game concept for people to play with pigs. Why, you ask? Why not? Actually, the reality behind it is a little less philosophical and a little more practical, but just slightly. As it turns out, the Netherlands requires farmers to equip their pig pens with some sort of entertainment device. Traditionally, this is something like a ball on a chain or something else equally mundane. During a conversation with some pig farmers, philosopher Clemens Driessen started brainstorming entertainment alternatives and Pig Chase was born.

The game, now a joint project between the Utrecht School of the Arts, Wageningen University, and Wageningen UR Livestock Research, is only in its concept phase, but has its gameplay mechanics all worked out. The pigs get a giant touchscreen in their pen, and the human player gets an iPad. The human uses the iPad to control a circle of light, which appears on the pig’s touchscreen. Now the pigs, curious and intelligent as they are, would put their snouts to the screen in order to touch the circle of light. Then the human, who has a view similar to what he would see standing behind the touchscreen if it was semi-transparent, guides the little circle of light around, ultimately trying to guide the pigs snout into a little destination triangle. If the mission is accomplished, crazy light animations go off on the pigs’ touchscreen.

Of course, by virtue of being a concept, Pig Chase doesn’t actually exist yet. Now that the concept has been designed, the gameplay decided, and some publicity is being achieved, everyone involved is hoping to create at least one instance of the real game. It might not catch on like wildfire or anything, but I think it’s fair to say that it’d be novel and entertaining for the humans and pigs alike.