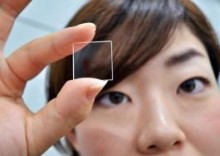 When you order food to your apartment from your phone while on public transit on the way to said apartment, it’s readily apparent that we’re living in some kind of sci-fi future. We may not have flying cars, but we can watch a whole season of Hell on Wheels from the bathroom even when Wi-Fi isn’t available. Future technology begets new and interesting ways to store all the data that future technology requires, so we probably shouldn’t be so impressed by this sliver of glass, unveiled by Hitachi, that stores data indefinitely. However, it’s a sliver of glass that stores data indefinitely, so we’re drooling over here.

Not only can Hitachi store data on the little pieces of glass, but the glass can withstand extreme conditions and temperatures without having the data degrade. So, if you happen to drop your glass Kickin’ ’80s Mix disc in a scorching hot desert for a few weeks, some lucky desert wanderer will most likely be able to listen to all that Tears for Fears you put on there without any issues.

The tiny sheets are two centimeters and a surprising two millimeters thin. The sheet can handle degrees of up to 1,832 Fahrenheit for two consecutive hours, is resistant to various chemicals, isn’t bothered by radio waves, and is waterproof. Basically, the data will survive unless you throw it into the Sun, or someone shatters the glass.

The Hitachi glass sliver isn’t actually the most impressive or advanced way to store data, it’s more of a clever workaround. Each sliver of quartz glass is imprinted with dots that represent binary data. The dots can be read with an optical microscope. Now, current computers aren’t equipped to understand the dotted data, but it wouldn’t be difficult to simply program a computer to do so.

The sliver in its current incarnation can hold four layers of dotted data, which turns out to be around forty megabytes per square inch — roughly the storage capacity of a standard CD.

So, you know how in certain sci-fi movies, people use glass crystals as data devices? That’s pretty much a thing now. Hitachi doesn’t have any mapped out plan as to when to attempt implementing the storage medium on some public level, but the medium works just fine, and it sure looks pretty neat.