Let’s Break Down Everything in the Star Trek: Picard Trailer

Of all the news and excitement out of New York Comic Con this weekend, perhaps nothing has us more excited or emotional than the new trailer for Star Trek: Picard, which premieres January 23 on CBS All Access. The series looks, to put it bluntly, amazing, and we can’t wait to engage with the continuing story of Captain Jean Luc Picard as he returns to the stars.

This isn’t the first look we’ve had at Picard. A shorter trailer debuted as San Diego Comic Con last summer, and revealed that old favorites Seven of Nine (Jeri Ryan) and Data (Brent Spiner) would have a role on the show, and we predictably freaked out. This newer trailer gives us some more insight as to what Data and Seven are doing in the series, as well as hinting more at the mystery the show will explore.

We start with the same idyllic views of Chateau Picard we’ve seen in the previous footage. Remember, this is the Picard ancestral home, and we’ve seen the vineyard in series multiple times – Picard’s brother lived there, and we saw Picard retired there in a possible future in the series finale “All Good Things.” It’s exactly where we’d expect Jean Luc to be. And he has a dog that he calls Number One!

What we didn’t expect it to see Commander Data chilling among the vines and painting. This seems to be some kind of dream – much like the card game between the Captain and his old friend in the previous trailer. It’s no surprise that Picard is dreaming of Data – the android who dreamed of being human died saving the Enterprise at the end of the last on-screen Next Generation adventure, Star Trek: Nemesis. The driving mystery of Picard seems connected to Data, but how? It might have something to do with what he’s painting.

Is that our new character, Dasj, played by Isa Briones? Maybe. Whoever or whatever she is prompt Picard into action.

Is Dasj an android? A clone? Is she a version of Data’s “daughter” Lal from waaaaay back in the TNG days? She’s definitely something special. Meeting Dahj gets Picard to head back to Star Fleet where he has to spell out his legendary name.

We see shots of people that look like androids or clones in some sort of Federation facility. It’s not encouraging and Picard is shut down by an admiral when he tries to fight for his ideals. Picard is left to to take on this adventure on his own with a non-Starfleet crew, which is set to include Michelle Hurd as Raffi Muskier.

She seems pretty dubious of Picard, but who can really argue with Jean Luc when he wants to go back into space? Also along for the ride will be Alsion Pill as Dr. Agnes Jurati, who has some sort of connection to whatever work is being hidden or connected to Dasj and Santiago Cabera as Cristobal “Cris” Rios.

Michelle Hurd says her Raffi Musiker is a genius hacker with a complicated history with Picard. She and Carberra have a “Han Solo and Chewie relationship” #StarTrekNYCC #NYCC

He looks pretty fun. But what’s more fun is seeing the return of Seven of Nine, who looks like she’s some sort of vigilante mercenary on the edge of the galaxy. “I help people who have no one else to help them,” says Seven. 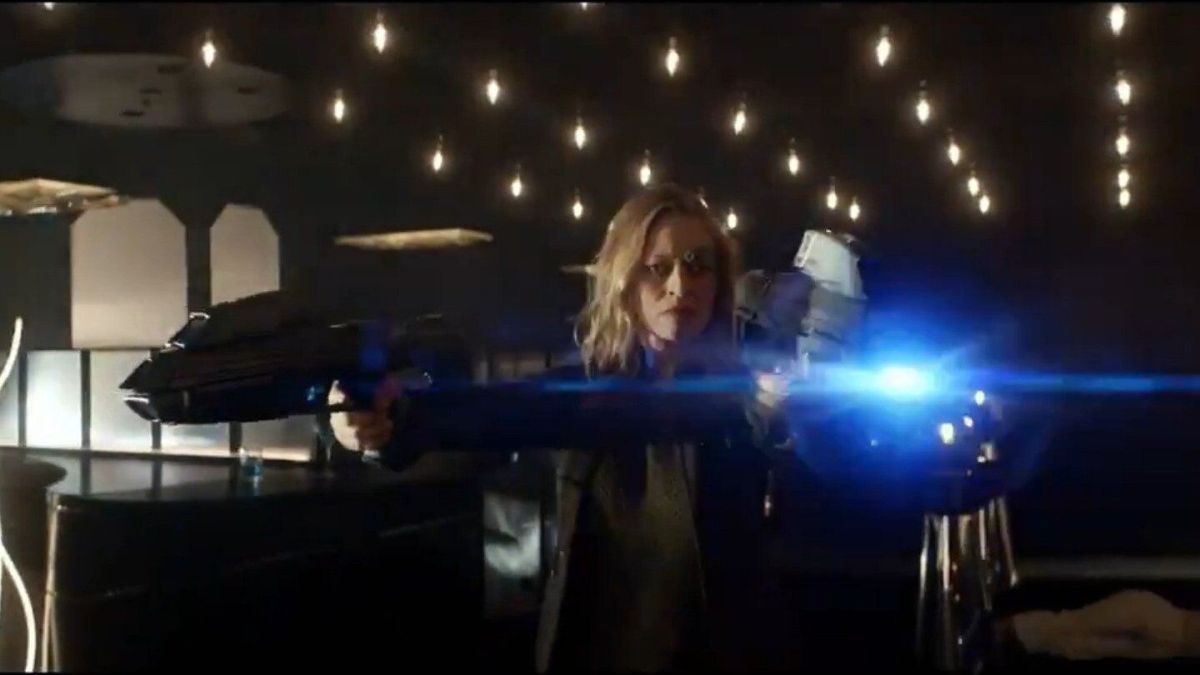 We are 100% here for that, and also the trailer’s implication that Dahj might have a connection, not just to Data but to Picard’s greatest foe: The Borg. There’s also shots of some villains discussing Dasj, and maybe one of them seducing her. We also see Harry Treadway as Narek, another member of the crew who spars (literally) with Picard and I’ll be calling Vulcan Legolas until I have a reason not to.

But of course what we were most excited and emotional about seeing was two familiar faces that Picard goes to visit before setting out on his mission: William Riker and Deanna Troi. And they have a kid!

I got a little (okay, a lot) choked up seeing Johnathan Frakes and Marina Sirtis back on screen with Stewart. It’s been a long time since we’ve seen these iconic characters and it’s so wonderful to revisit them and know that their stories continue. Will we see more TNG folks besides Dream Data, Riker and Troi? Maybe, the producers hinted at NYCC. My biggest hope is that we’ll see the woman that married Picard in one version of his timeline: Beverley Crusher (Gates McFadden).

It so exciting to be back in this world, especially after the sad and somewhat disappointing end to the Next Generation narrative in Nemesis. This series has production values that make my heart soar, and I can’t wait to spend time witch characters old and new, and see where Picard will take us.

What do you think? What did you catch in the trailer that has you most excited?