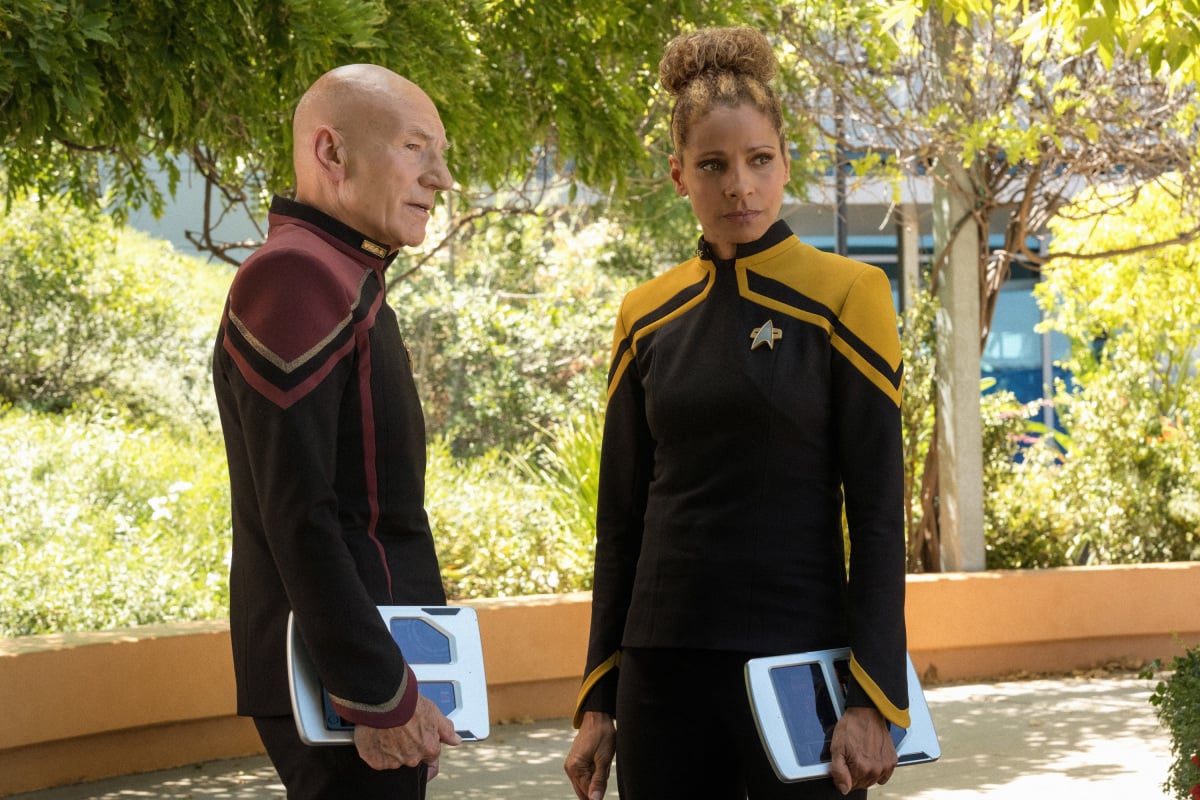 Star Trek and Star Trek: The Next Generation were very much expressions of a utopian idea. Gene Roddenberry’s hope was the idea that if humanity just stops fighting each other and elevates reason, science, and discovery, we will become fairer and more enlightened. What makes Trek…Trek is a hopeful, idealistic view of the future and it’s been hard for Trek variations (hi, Into Darkness) that departed from this to find traction with fans.

This is why the balancing act performed by Picard is so impressive. It shows us that institutions like the United Federation of Planets and Starfleet can become corrupt or isolationist and that even a man like Jean-Luc Picard – who literally exemplified the best in humanity when it was placed on trial – can make grave mistakes and fail. And yet the series still maintains the idealism at the core of the Star Trek universe: that all living things have value.

There are several ways Picard has accomplished this feat in the first few episodes and done so in a way that echoes the perils of our own time. The action of the series begins in an environment of paranoia and fear in the Federation due to what seemed like an uprising or mass failure of “synthetics” at the utopia planetia shipyards on Mars.

It’s a terrorist attack that we have yet to fully understand as the audience, but what we do understand is the impact of such an attack and the phenomena of a government like the Federation using it as an excuse to turn to isolation and prejudice. This happens not just to “synthetics” but to the Romulans, who the Federation was in the midst of helping at the time of the Mars attack.

The Federation and Star Fleet, which so often in other Trek iterations have been this ideal of Utopian perfection (though corruptible as we saw in that one episode where like, evil alien bugs were controlling some admirals’ minds…) is now fallible. It’s responding in a way we know governments and the armed forces often will: with suspicion and fear. But the “enemy” is also one that’s incredibly complex, which is what makes this all so interesting.

Picard has also done something that The Next Generation didn’t have the budget or perspective to do very often: humanize (well, maybe that’s not the best word, but at least make sympathetic) the Romulans. The Romulans have always been the ultimate cold, calculating villains in Star Trek. In Picard however, we have several complex, sympathetic Romulans on a spectrum of moral alignments: From Picard’s friends on the vineyard to Narek, who I think we’ve all agreed to call “hot Romulan Ben Whishaw.”

Picard has shown us interesting looks at Romulan culture, but we’re still suspicious of them since there are Romulan agents in Star Fleet (eeep!)but…the Romulans are also working to save former Borg? It’s all very mysterious and complex and it reflects, yes a world where utopia has literally been blown up, but one still where there is humanity (you know what I mean) in everyone. Picard, the man, still believes in that, but it’s hard.

This is especially true in terms of how the show is portraying Picard himself. As I noted, he’s not perfect. In fact, he is haunted by the Mars attack and how it led to the federation to abandon the Romulans. And he’s also tortured by the fact that his grand gesture – resigning from the Federation in protest – failed to make an impact.

I love this but I also love that we see the consequences of that decision for others, like Raffi (Michelle Hurd). It’s really interesting that we see the effect of Picard’s moral stance of a woman like Raffi, who is destroyed by Picard’s resignation and ends up paranoid and using drugs (they do exist in the Federation!). Raffi shows a human, hurt side of Star Trek that we didn’t see enough of in the more sterile world of The Next Generation, and yet it works. The same is true of captain Rios (Santiago Cabrera) and Dr. Jurati (Alison Pill). They exist in opposition to the Federation, but not its ideals of unity and humanity…but against its failures. The heroes of Picard are standing up for what Star Fleet has forgotten.

How will this darker, but more nuanced take on the Trek world continue to play out? I genuinely don’t know and that’s super exciting.

Star Trek: Picard is available on CBS All Access.