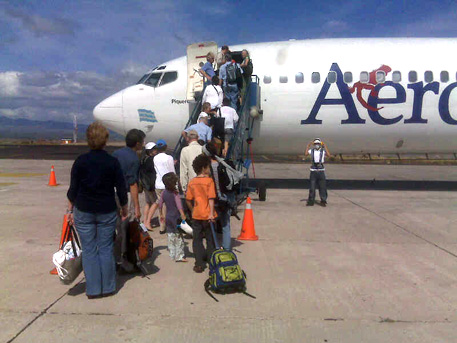 Boarding a plane efficiently has been a problem for years. Too many people trying to do too many things in too small a space is never a fun time for anyone. It makes you think “man, someone should come up with a more efficient way to do this.” Someone did, in 2008. It didn’t take. In doing some research on the subject, Jason Steffen found that boarding rows on alternate sides, starting from the windows and moving inwards, is by far the most efficient method and could cut boarding times for most flights in half.

If that weren’t enough, he also found that boarding by blocks — the norm at the moment — is not only less efficient than his method, but wildly inefficient in general; boarding randomly is more effective. Obviously, when he published a paper on the subject in the Journal of Air Transport Management, it didn’t really catch on because no one adopted the method. Recently, however, the discovery was showcased on the show This vs. That and has been blowing up on the blogosphere. Hopefully, those in charge of boarding practices will take note. If efficiency isn’t enough, carriers could stand to save $110,000,000 annually through the use of this method. That should catch their eye.