We all know that I mean when I say “comic book poses,” right? You know. They’re those poses that comic book artists always love to inflict on female super heroes. The ones that bend the rules of anatomy and physiology in order to show you boobs and butt at the same time. Yeah, those. Well, the fine folks over at BuzzFeed tried a little experiment with these poses: they tried to emulate them in real life.

As you may have already guessed, this doesn’t work. People’s bodies just do not bend the way that they’re made to in comic books. Take a look at the (incredibly notorious) Spider-Woman example. 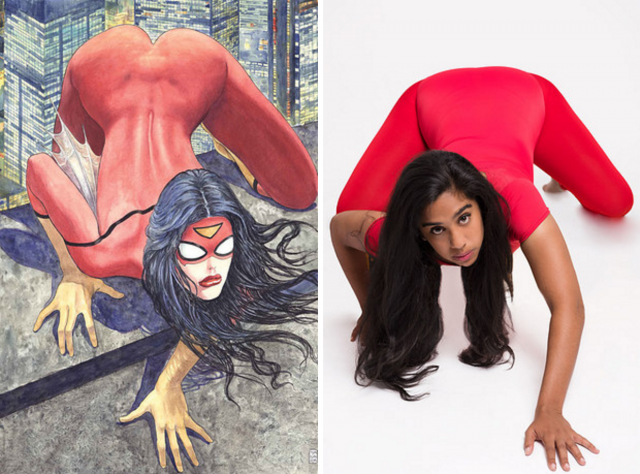 There’s just simply no way that works out. Nina, the model who attempted the pose, had this to say about the experience:

I thought it would be fairly easy to rest on my forearms and knees and just pop my butt up a little but it was HARD AF. Everyone kept telling me to adjust myself in impossible ways to match the picture. I legit broke a sweat!

What really sets this BuzzFeed post apart, though, is the fact that they photoshopped the models’ pictures afterwards to get them to look like their comic book counterparts. The results were jarring, to say the least. 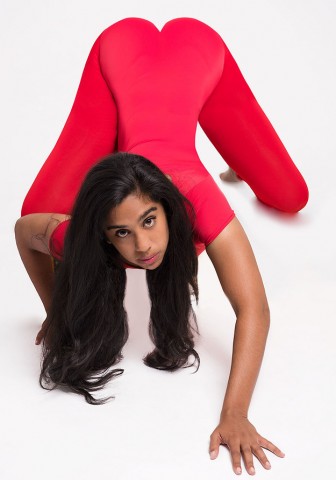 And what did she have to say about the photoshopped picture?

BEHOLD MY HEART BUTT. It’s like my ass is saying “I love you” to the world. Also my thighs are about a foot longer. I guess this is how I’d look if I were 6’3”. The top half of the photo just isn’t me at all. They might as well have just put my face on a cartoon body, because that’s what it is. I don’t look human.

There’s plenty of other simulated photos in the BuzzFeed post itself, and the entire thing is worth taking a look at if you have a moment. Granted, it’s semi-NSFW, what with all the women in somewhat risqué poses. You’ve been warned.

This all hammers home something I believe we’re all already aware of: comic books cater to the male gaze. They do so often unwittingly, simply because that’s how it’s always been done. Or so they say. I understand that arguing for realistic poses in comic book art may be odd given that most comic books are about defying realism, but frankly, these poses are too much.

BuzzFeed’s video illustrates how ridiculous and humorous these things are, and it does it with much aplomb. Thank you for that.