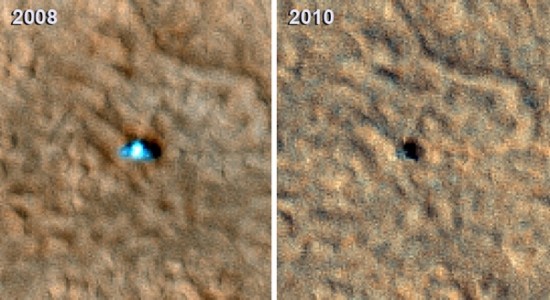 The Phoenix Mars Lander, the solar-powered vehicle originally sent to analyze the Martian north for a planned three-month mission in 2008, has been effectively pronounced dead by NASA, who have announced today that they will no longer attempt to contact it. NASA lost contact with the Lander in late 2008, presumably due to extreme cold conditions that it was unequipped to handle. In the before-and-after picture above, you can see that the gleaming blue solar panels that were present in ’08 were damaged or destroyed by ’10.

“The 2008 lander image shows two relatively blue spots on either side corresponding to the spacecraft’s clean circular solar panels. In the 2010 image scientists see a dark shadow that could be the lander body and eastern solar panel, but no shadow from the western solar panel.”

NASA eulogizes the brave Lander, which made a number of key findings about Martian soil chemistry, most notably in its discovery of perchlorate:

During its mission, Phoenix confirmed and examined patches of the widespread deposits of underground water ice detected by Odyssey and identified a mineral called calcium carbonate that suggested occasional presence of thawed water. The lander also found soil chemistry with significant implications for life and observed falling snow. The mission’s biggest surprise was the discovery of perchlorate, an oxidizing chemical on Earth that is food for some microbes and potentially toxic for others.

“We found that the soil above the ice can act like a sponge, with perchlorate scavenging water from the atmosphere and holding on to it,” said Peter Smith, Phoenix principal investigator at the University of Arizona in Tucson. “You can have a thin film layer of water capable of being a habitable environment. A micro-world at the scale of grains of soil — that’s where the action is.”

The perchlorate results are shaping subsequent astrobiology research, as scientists investigate the implications of its antifreeze properties and potential use as an energy source by microbes. Discovery of the ice in the uppermost soil by Odyssey pointed the way for Phoenix. More recently, the Mars Reconnaissance Orbiter detected numerous ice deposits in middle latitudes at greater depth using radar and exposed on the surface by fresh impact craters.