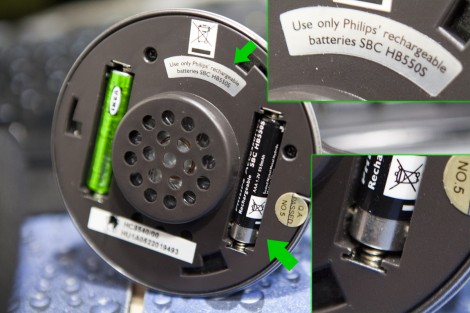 Over on Figure Maniac, a possibly deep, dark secret has been unearthed regarding some Philips’ brand headphones, as it turns out Philips SBC HC8545 headphones contain a system that detects whether or not Philips brand rechargeable batteries are being used, and if not, significantly lessens the length of the third party rechargeables. Making the claims a little more believable–and Philips a little more evil–is the fact that the headphones come with a warning saying only Philips brand rechargeable batteries should be used with the product, and not third party rechargeables. The headphones contain an extra conductor in their battery slots that make contact with a battery’s case. Through the extra conductor, a reverse-biased diode touches a specific part of a battery’s case, which makes contact with a part of the battery that is not painted, thus allowing the headphones to distinguish Philips brand batteries from other brands. During testing, the connection between the extra conductor and battery was shorted out, and the length of third party batteries–which have the same specs as the Philips brand–were significantly increased, thus proving that said extra conductor indeed identifies, then regulates battery life as related to the headphones.

So, what’s going on here? An evil corporate scheme to force brand loyalty? Possibly, though a few astute commenters over on Hack A Day claim this kind of regulation is nothing more than a safety precaution put in place due to the wide array of third party rechargeable batteries floating around on the market, and Philips is only attempting to lessen the potential for the batteries to malfunction and damage the headphones, or in the worst case scenario, having the headphones break in a way that could cause some damage while someone is wearing them on their head.

(Figuramania.blogspot.com via Hack A Day)