So the lines are deaf now, too? HEY-O! 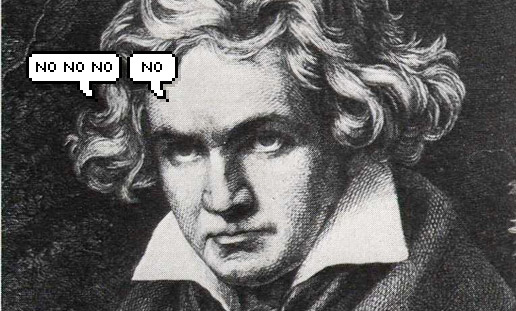 The lawsuit Marvin Gaye’s estate dropped on Pharrell and Robin Thicke for allegedly ripping off the R&B legend’s signature style continues to give us so many precious gifts. This time? Pharrell and Thicke have invoked the good name of Ludvig Van Beethoven himself to suggest that they’re not responsible for the two songs sounding alike. Oh man, I have to hear this one.

According to the TMZ summary of events, court documents from the pair of songwriters (or the one songwriter and the other guy who showed up high, I guess) claim that although “Blurred Lines” begins with a repeated note in the same way that Marvin Gaye’s “Give it Up” does, so does Beethoven’s fifth symphony. “Their point,” TMZ says, “[is that] musicians have been using repeating tones since the dawn of time… or at least since 200 years ago when Beethoven was doing his thing.”

To be fair, that is an accurate point: in music, plagiarism and inspiration can often be hard to differentiate from one another enough to satisfy a court of law (You know, unless you’re George Harrison and you literally write the exact same song as Robert Mack and the Chiffons did—or if you’re sampling tracks, but that’s another matter entirely). If we went after everybody whose songs used similar patterns or tonal changes as an already existing song, then there wouldn’t be very many musical artists left. Also, those guys who do the chord progression medleys on Youtube would be Batman-level vigilantes by now.

However, their choice to cite Beethoven’s fifth specifically is particularly hilarious when you remember that Robin Thicke’s debut single back in 2002, “When I Get You Alone,” WAS LITERALLY BEETHOVEN’S FIFTH.

(Ir’s okay, it’s the a cappella version from Glee. I would not force you to listen to Robin Thicke singing when Darren Criss does it so much better anyway).

Oh, oh! And? That version of Beethoven’s fifth isn’t even new. It was originally arranged by Walter Murphy and came out in 1976. Thicke just added words to it, but Murphy’s still officially credited above him as the writer.

So… maybe Beethoven was not the best example for you to bring up, fellas?