In which this dark take on Victorian classics lives up to expectations. 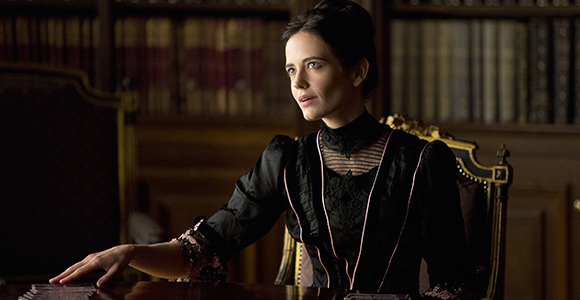 It’s no secret that I’ve been pretty stoked for Penny Dreadful for months; but, as is so often the case with these things, I was afraid the reality of this new series wouldn’t live up to the fog-clouded gothic expectations I’d built up in my mind. Fortunately, Showtime’s new series gave me all the literary creepiness I wanted — and more.

First, a quick backgrounder about the show title: Penny Dreadful is not, in fact, the chosen name of a girl who probably shops at Hot Topic and doesn’t want to clean her room; it was actually a particular type of fiction published in the mid-nineteenth century. “Penny dreadfuls” were serialized fiction featuring sensational stories, printed on pulp, and sold for a penny on the streets, or in many of the traveling libraries that popped up around England alongside the advent of train travel (people needed cheap pulp fiction to read on the train, you feel me?) Penny dreadfuls were essentially the Ghost Hunters or Golden Age comic books of the Victorian era.

Now that you’ve got yourself a solid history lesson, it should be no surprise to learn that Penny Dreadful is heavily influenced by literature, with nineteenth-century Gothic horror at the forefront. I mean, yes, there are the obvious things (vampires! monsters! fog! dead bodies! the supernatural!); but the show, in large part, also derives its tone and pacing from the sensational literature of the nineteen hundreds. “Night Work” is deliberately slow in delivering plot – by the end of the episode, we know the crux of the show is a hunt for a missing girl, and not much else. Instead, the audience is treated to an episode that focuses on setting the tone for the series as a whole, the grimy darkness of London a fitting backdrop for the perfectly-Victorian cast of characters.

Because, seriously, everyone in this show is either a famous fictional character or recognizable literary trope. Timothy Dalton plays Sir Malcolm Murray, the African explorer/colonialist who belongs to an Adventurer’s Club and is pretty much just Allan Quartermain if that movie wasn’t such a major let-down. It’s Malcolm’s daughter Mina who’s gone missing, kidnapped by vampires, and it’s his story that drives the major plot of the show (so far). Malcolm lives with Eva Green’s enigmatic Vanessa Ives, the quintessentially mysterious gothic woman with the dark past – she’s somehow linked to Mina, and potentially has some weird demonic business going on. But my favorite thing about Vanessa is the way in which she also manages to subvert our expectations for the gothic female; she has an almost Holmesian ability to read people, she’s authoritative, and she clearly has more to her than just that which serves Malcolm’s story.

Then we’ve got the surprisingly-awesome Josh Hartnett as audience-proxy Ethan Chandler, an American Wild West-style gunslinger and performer through whom we’re drawn into all this insanity. Just like the American “dime novel” stood as an across-the-pond equivalent to the English penny dreadful, so too does Ethan’s dime novel hero stand in contrast to Vanessa’s gothic heroine. And you can be sure that, though he’s not interested in the name of the random girl he bangs at the beginning of the episode, he finds Vanessa immediately intriguing enough to ask for hers.

Finally, we have the Big Twist of “Night Work” – Harry Treadaway as Victor Frankenstein. Personally, this is my favorite bit of casting in the show – Treadaway plays Victor true to Mary Shelley’s original work; a kid who thinks he knows everything and has all the answers to life’s mysteries, but is actually kind of an asshole. And wrong. Though Shelley’s novel is actually a work of Romantic literature, I think Penny Dreadful actually does a good job of acknowledging Victor’s displacement in the world – he’s got the soul of a under-appreciated Romantic poet, and he just doesn’t quite belong in Victorian London. It works.

And the show drops other amazing easter eggs for fans of both the genre and era – but subtly; there are no big music cues or WHOA GUYS THIS IS AN IMPORTANT REFERENCE moments in the episode. The biggest is, of course, the name-drop of Malcolm’s missing daughter, Mina; for those not down with old-timey lit, you should know that the maiden name of the lead lady in Bram Stoker’s Dracula is Mina Murray, which means we’re likely to get a glimpse of the famous vamp before the show’s eight episodes are up. Beyond that, we got vampires somehow linked to Ancient Egypt (and Egyptology was huge in Victorian Britain); a Wildean dandy in Egyptoligist Lyle; an opium den, under which sits the vampire lair (how metaphorical); an introduction to spiritualism and the demi-monde; and a possible return of Jack the Ripper (despite the episode being set three years after his last killing, historically).

A few quick final notes of interest: first, the episode – despite being a Showtime original – features exactly zero naked ladies, but two fully-nude dudes (way to go, Showtime). It’s also worth noting that I think we see a werewolf in the opening credits and Vanessa opens the episode by hearing a growling voice say “I’m hungry,” so it might be safe to assume we’re going to see some lycanthropes in the show at some point. Another nice literary tip of the hat is the show’s reliance on cliffhanger endings – both episodes one and two finish on big, shocking notes that draw you into the next episode. Don’t forget, the penny dreadfuls of the 1800s were also serials – they had to convince you to pick next month’s chapter up for a penny. What better way to do that than to have each one end on a huge cliffhanger?

Ultimately, Penny Dreadful succeeds at replicating the slow, creeping horror of nineteenth-century gothic literature by grounding its supernatural elements in the reality of contemporary London; a place where the day is filled with false fronts, and the gas-lit nights reveal truths in the darkness.

And I can’t wait for more.