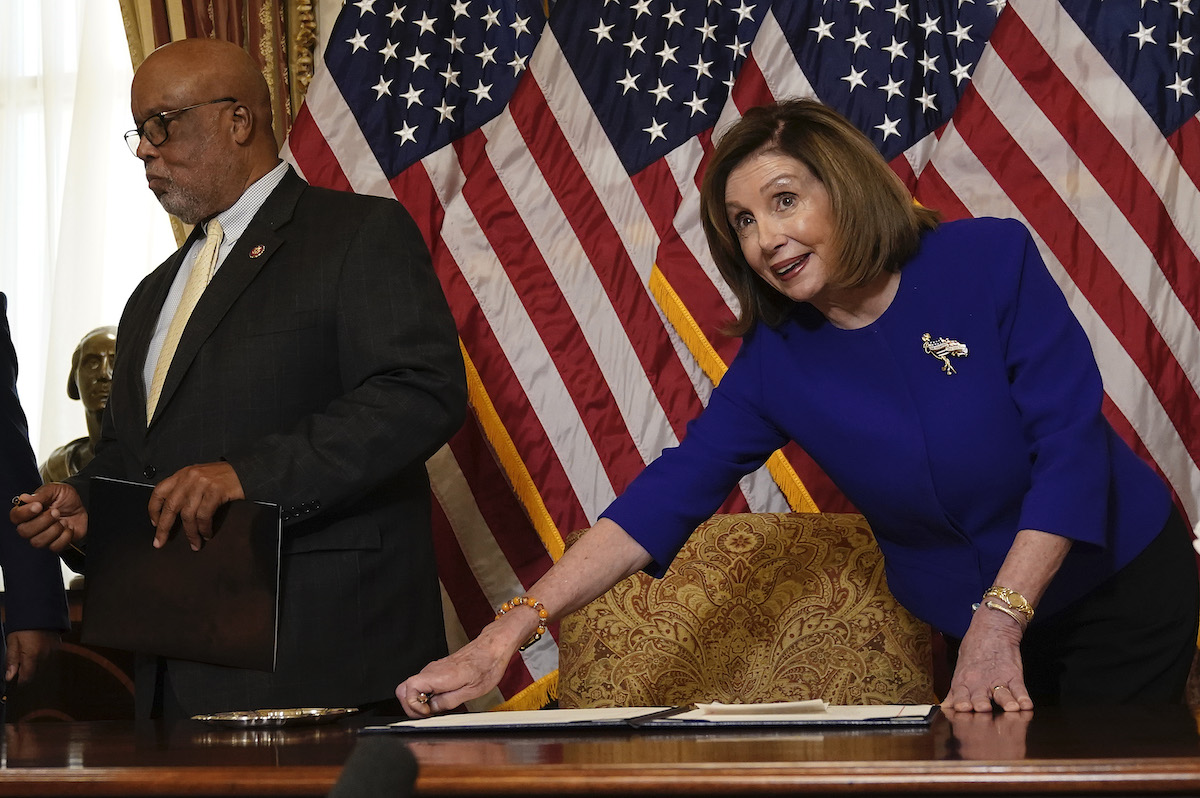 In yet another absolutely staggering display of hypocrisy, Donald Trump retweeted the editor of the ultra-rightwing outlet The Federalist, mocking Nancy Pelosi for reportedly getting the idea to withhold the articles of impeachment from a guest on CNN.

Oh dear that is embarrassing https://t.co/wSXgAcACqm

Can you even imagine having so little self-awareness? This is a man who gets all of his policy ideas from one of two sources: racist bat boy Stephen Miller and/or Fox & Friends. At least the CNN guest that Pelosi is said to have listened to was the former White House counsel under Richard Nixon, meaning he has some actual relative experience here.

But Mollie Hemingway called it “embarrassing.” “She will go down as perhaps the least successful Speaker in U.S. History!,” Trump added.

Trump, who is briefed by Steve Doocy every morning, retweeting Mollie Hemingway pretending to have a problem with someone… who may have gotten an idea… from someone… on TV. https://t.co/T22ujcUtNN

Trump’s hypocrisy here is multi-fold. It’s not just the idea of getting a political idea from a news program–something Trump does pretty much every day of the week. But the part of the original TIME article that alleges Pelosi got the idea from CNN comes from an unnamed aide. And I thought we knew how Trump felt about unnamed sources.

When you see “anonymous source,” stop reading the story, it is fiction!

Do not believe any article or story you read or see that uses “anonymous sources” having to do with trade or any other subject. Only accept information if it has an actual living name on it. The Fake News Media makes up many “sources say” stories. Do not believe them!

Pelosi’s decision to hold onto the impeachment articles rather than sending them immediately to the Senate is proving to be a controversial one. Even some Democrats are publicly questioning the move. But it’s not because the idea might have originated from some cable news analyst.

“The longer it goes on the less urgent it becomes,” California’s Dianne Feinstein said this week. “So if it’s serious and urgent, send them over. If it isn’t, don’t send it over.”

She wasn’t the only one to express that sentiment. Via Politico:

Several other Senate Democrats also showed their impatience with the Democratic leaders’ strategy. Sen. Joe Manchin (D-W.Va.) said Wednesday morning that Democrats “should move on” and send the articles to the Senate, and Sen. Jon Tester of Montana said he’s “ready” for the trial to start.

“We need to get folks to testify and we need more information … but nonetheless, I’m ready,” Tester said. “I don’t know what leverage we have. It looks like the cake is already baked.”

“I respect the fact that she is concerned about the fact about whether or not there will be a fair trial. But I do think it is time to get on with it,” said Sen. Chris Coons (D-Del.).

But at her weekly press conference Thursday, Pelosi wasn’t caving. “I’ll send them over when I’m ready. And that will probably be soon,” she said.

Pelosi also said there would be no vote on House managers (the representatives from the House that serve as sort of prosecutors in the Senate trial) before the weekend, but early Friday afternoon she announced that she’ll be sending the articles to the Senate next week.

“I have asked Judiciary Committee Chairman Jerry Nadler to be prepared to bring to the Floor next week a resolution to appoint managers and transmit articles of impeachment to the Senate,” she said in a letter to House Democrats.

Pelosi had been holding onto the articles in an attempt to push Mitch McConnell–who has been out here bragging about his plan to rig the trial in Trump’s favor–to take all of this seriously. That simply isn’t going to happen, and on Thursday, McConnell backed a GOP resolution to change the Senate rules altogether and dismiss the impeachment without ever receiving the articles.

“Yesterday, he showed his true colors and made his intentions to stonewall a fair trial even clearer by signing on to a resolution that would dismiss the charges,” Pelosi wrote in the letter.

McConnell says he has the votes necessary to proceed with a trial without calling any witnesses, meaning this could be a very short trial once it finally gets started. (It’s also not too late to call your senators–especially if they are Republicans!–and let them know how you feel about all this.)