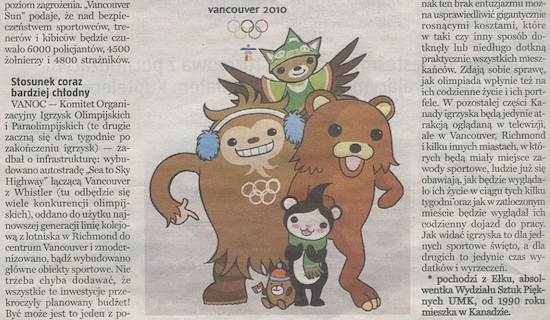 Thanks to a lazy Google image search, a leading Polish newspaper erroneously claimed that despicable Internet meme Pedobear was one of the mascots of the 2010 Vancouver Olympics. But that’s not the first time the pervy bear has fooled the gatekeepers of reality and made its way into the real world:

Some more background on the Vancouver debacle: some months ago, artist Michael R. Barrick ‘Shopped Pedobear into a picture of the 2010 Olympic mascots. Thereafter, the image he created became one of the tops in Google Image Search; mayhem ensued.

And the Polish paper wasn’t the only one fooled: Barrick: “So the Gazeta Olsztyn‘s epic fail in publishing my simple critique of the unfortunate resemblance of the Vancouver 2010 Olympic Mascots (Quatchi in particular) to Pedobear was yesterday’s news. Despite the fact that it is now being LOL’d at all over the Intertubesand has been documented in Encyclopædia Dramatica, and the link I have to Know Your Memes explaining just what Pedobear is, today we now have a Spanish sports blog presenting the image again.”

A column that conservative commentator Pat Buchanan wrote in July about the early months of Barack Obama‘s presidency got plenty of attention even from normally politically disengaged bloggy types, and not because of the prose.

Wonkette: “it seems possible that whoever decided to combine Pat Buchanan’s Nixon column with a picture of Pedobear did not fully understand what that little cartoon character is really “about.” 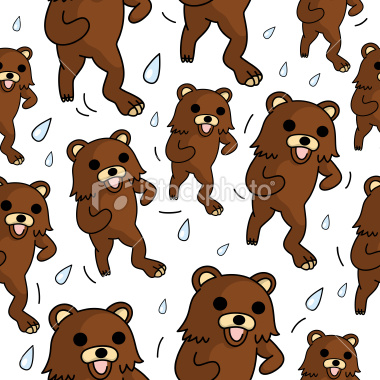 Malevolent creatures graphically representing every possible permutation of the shady bear isn’t particularly noteworthy; their creations being approved by a major, for-profit Getty Images subsidiary is. The wrapping paper has (fortunately) since been taken down, but a NeoGAF forum thread preserves it in all its ignominy.

A costume store in Portland accidentally put out a flyer bearing a Pedobear-like ursine figure. This would have been bad enough, but a local news station picked up on the story, excruciatingly ran mainstream audiences through a brief Pedobear history (the video has since been pulled), and even interviewed Cheezburger Network CEO Ben Huh about Pedobear’s cultural significance. Self-fulfilling prophecies, anyone?

This may be yet another fan (?)-made Pedobear tribute, but it graced (?) the covers of an 89,000+ circulation auto magazine: In a front cover clearly meant to highlight the merits of a drift-ready Scion, and also possibly a hot babe, you will find an unwelcome (?) guest spectating in the stands.

Some rogue cover designer probably got a stern talking-to for this, though it is probably not that hard to make the most controversial cover of Import Tuner ever.

Related: Know Your Meme has a comprehensive history of the Pedobear meme, from 2chan’s innocent “Safety Bear” to 4chan’s Chris Hansen-hounded scourge.