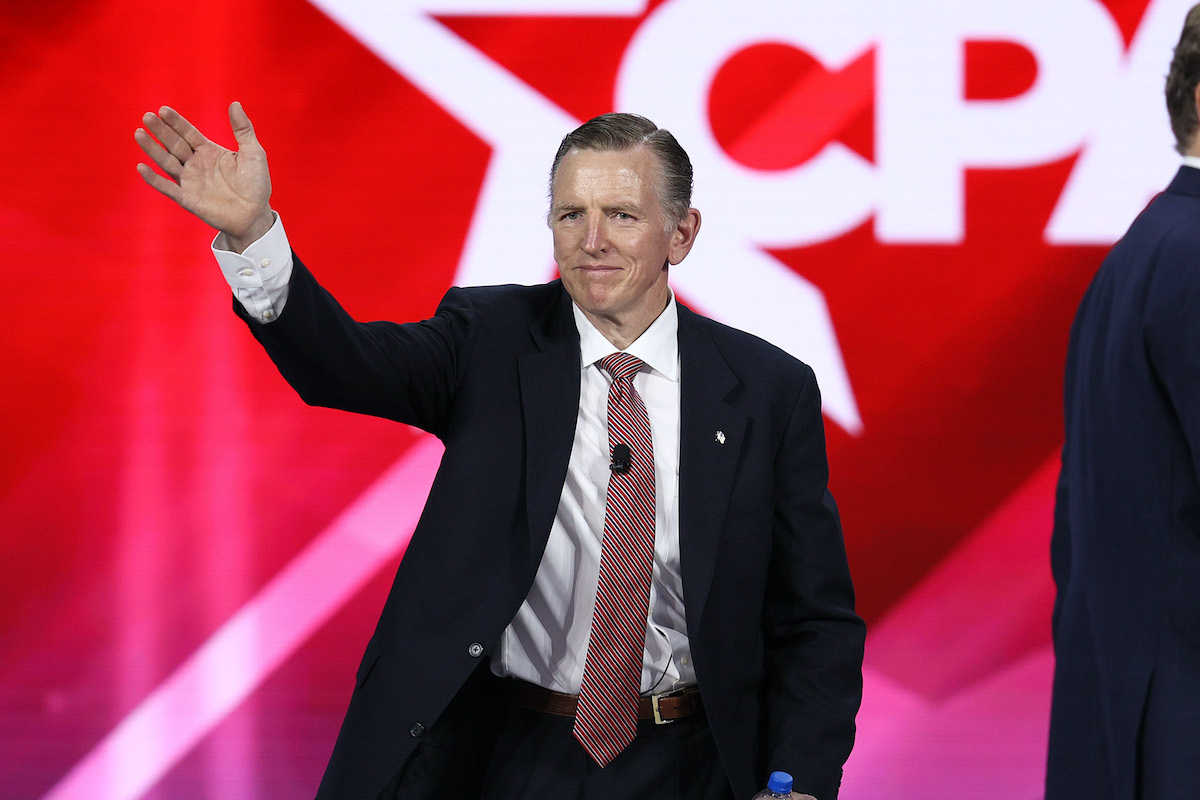 Arizona Congressman Paul Gosar has never tried to hide his support of white nationalism. He follows quite a few white nationalists on Twitter, along with QAnon conspiracists, bargain barrel anti-immigrant racists, and other just generally terrible people. He’s tweeted out Jeffrey Epstein memes and doctored photos of Barack Obama. But in recent weeks, he’s become much more brazen with making sure we all know just what it is he stands for.

On Sunday, Gosar posted a meme to his Twitter account, captioned simply #AmericaFirst—a well-worn white supremacist slogan. It shows a sex worker leaning in through a car window, and a man offering her $50 to “tell everyone America First is inevitable.”

This a tweet from a sitting Member of Congress. 🤦🏽‍♀️ https://t.co/jIvGOYuliF

This meme, which both degrades sex workers while promoting white supremacy, comes just a few weeks after Gosar appeared as a keynote speaker at a white nationalist convention in Florida.

According to the Washington Post, when Gosar finished speaking at AFPAC, Fuentes took the stage, where he “spent 67 minutes mocking a disabled member of Congress, calling the Jan. 6 riots ‘awesome’ and demanding protection for the country’s White demographic core.'”

Gosar also spoke just after former representative Steve King, who was famously stripped of his committee assignments while in office after asking what was so wrong with calling yourself a white nationalist or a white supremacist. Apparently, he never got an answer to that question.

Here’s Gosar beaming during a meeting Fuentes following the conference:

Gosar’s appearance attracted some media coverage, but it mostly went unnoticed. Nearly every single Republican lawmaker has failed to comment on his decision to speak to the group (as far as I can see, Rep. Liz Cheney is the only sitting Republican who has condemned Gosar publicly), even though he went almost immediately from AFPAC to the Conservative Public Action Conference (CPAC).

So why wouldn’t Gosar feel comfortable brazenly posting awful white nationalist memes to his public Twitter account? No one is holding him accountable. Gosar defended his decision to appear at the conference because, as he put it, “There is a group of young people that are becoming part of the election process and becoming a bigger force. So why not take that energy and listen to what they’ve got to say?”

I mean, the Anti-Defamation League has laid out pretty thoroughly why you wouldn’t want to listen to Fuentes and his ilk but Gosar, unfortunately, isn’t exactly wrong. Young white supremacists are a growing voting bloc. If the Republican party wouldn’t like to be beholden to them, now is the time to speak up. Because their silence is coming across loud and clear.