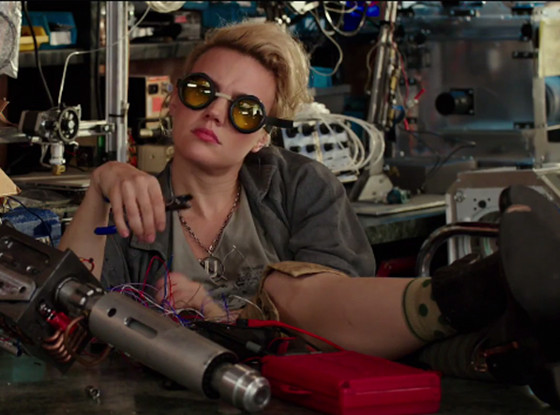 Ghostbusters isn’t officially out in the United States, and some fans might see this news as a spoiler (although I’d argue it absolutely is not). Still, you’ve been warned.

In an interview with The Daily Beast yesterday, Ghostbusters director Paul Feig made a cryptic statement about “dealing with the studios” with regards to Kate McKinnon’s character, Jillian Holtzmann. Here’s the relevant excerpt, from The Daily Beast’s piece:

But while McKinnon is SNL’s first openly lesbian cast member, Ghostbusters offers only hints on Holtzmann, who spends her free time shamelessly flirting with Erin. I ask Feig: Is Holtzmann gay?

He pauses, smiling. “What do you think?”

I’d like to think yes, I say. He offers a grinning, silent nod. “I hate to be coy about it,” he offers. “But when you’re dealing with the studios and that kind of thing…” He shrugs apologetically.

Feig went on to say that he tried to let McKinnon’s actual personality shine through the film: “You know, Kate is who she is and I love the relationship between Kate and Melissa’s characters. I think it’s a very interesting, close relationship. If you know Kate at all she’s this kind of pansexual beast where it’s just like everybody who’s around her falls in love with her and she’s so loving to everybody she’s around. I wanted to let that come out in this character. I wasn’t like, ‘And now you should wink at them.’ This is stuff that is coming out of Kate! That’s why you connect with those characters. They’re playing versions of themselves.”

Obviously, allowing an actor to play up subtext isn’t the same as writing explicit, undeniable representation—I suspect Paul Feig knows that. He apparently had no choice but to be “coy,” both in the interview and in the movie’s representation, but having an out actor play a vague “version of themselves” in a movie isn’t quite explicit representation.

God knows how the people already salty about an all-female Ghostbusters reboot would have reacted to news that one or more than one of the ‘busters was also gay, but it would have been pretty cool to bring positive, undeniable representation to a new generation of Ghostbusters fans. Here’s hoping that if we get a sequel, Feig won’t need to be as coy.

We’ve reached out to Sony for clarification on this subject but have yet to hear back.