Passport to Iron City Immerses You in 'Alita: Battle Angel' | The Mary Sue

Passport to Iron City Immerses You in the World of Alita: Battle Angel

The pop-up is currently active in New York, Los Angeles, and Austin.

Immersion experiences have quickly become popular promotional tools for big event film releases. The IT reboot built a haunted house in Hollywood and Ready Player One offered up an interactive maze. Alita: Battle Angel has entered the fray with an all-new pop-up experience called Passport to Iron City. The experience comes from a collaboration between 20th Century Fox, L.A.-based creative production company iam8bit and The Seelig Group (TSG).

The experience, which lasts roughly two hours, is part escape room, part interactive board game. Iron City assembles you into groups of six, where you are given an I.D. badge and assigned a team color. You are then shepherded to the Kansas bar, where there is beer and wine and some assorted snacks (yes, you can get Skittles in Iron City). The beer is specially brewed by Three Weavers Brewing Company (a female-fronted brewery, cheers!). Unfortunately, despite signs everywhere calling the bar a taqueria, there were, to my disappointment, no tacos.

Teams are given roughly 30 minutes in the bar to strategize, hunt for clues, and interact with the residents of Iron City, who all sport vague New Jersey accents (is Iron City located in what remains of the Garden State?). All the actors are very game and clearly having fun with their roles. Unwilling to go it alone, I recruited fellow Los Angeles TMS writer Kate Gardner to join me in Iron City. 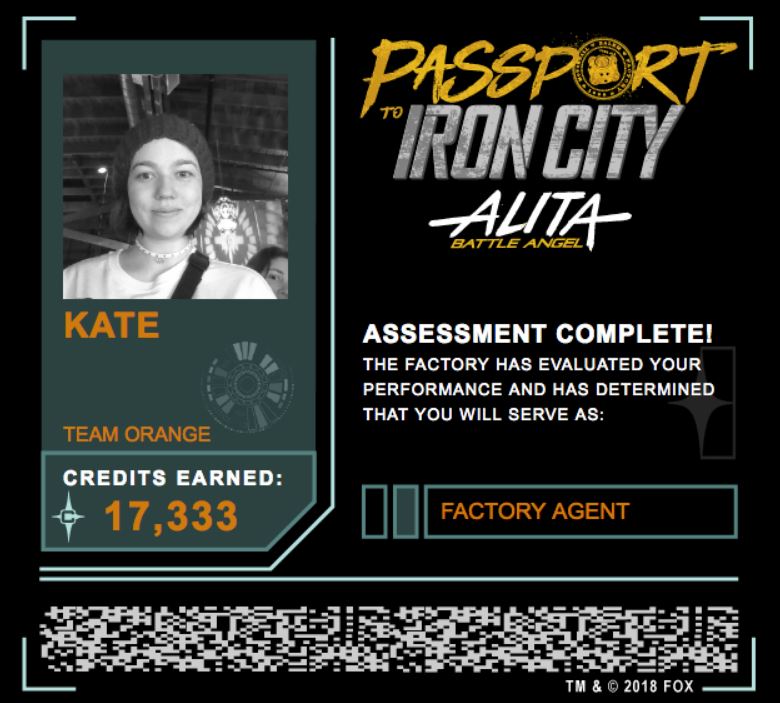 (image: Kate’s Iron City assessment, with me photobombing in the background, via 20th Century Fox)

Soon, you’re moved into the main space, where there are several different activity zones. The activities are all hands-on, ranging from puzzle-solving to eye-hand coordination. In the market place, vendors will give you different essential oils to smell and identify.

In Dr. Chiren’s Enhancement Assessment, you’ll be tested on your speed and strength. In addition, there are puzzles and riddles to be found in every wall sign, piece of graffiti, and chatty city resident. Each activity earns you credits, which you can later use to gamble on a motorball match.

You have roughly an hour to wander in Iron City, which doesn’t give you enough time to experience every challenge. The experience culminates with the motorball match, where the team with the most credits wins a commemorative token. Sadly our team, Team Orange, did not win, but we did have a good time playing around in Iron City.

The experience ends, as all things must, with a trip to the gift shop. Overall, we had a fun visit in Iron City. The film’s producer Jon Landau lauded the experience as “exhilarating as it is diverse. Passport to Iron City will allow visitors to experience the world of Alita: Battle Angel on a first-hand interactive basis. iam8bit has created a unique and engaging experience that will entertain everyone, including those that have seen and have not seen the movie.”

And it’s true: you don’t need to have seen Alita: Battle Angel to enjoy the experience. And while we had a good time, we’re not sure if the experience merits the $25-40 ticket price. I would say our experience capped at $20-25 bucks. But if you’re really into puzzle-solving and games, maybe it’s just the ticket for you. Kate agreed, saying, “It’s worth a trip if you’re a diehard Alita fan, but otherwise save your ticket money for a more immersive escape room.”