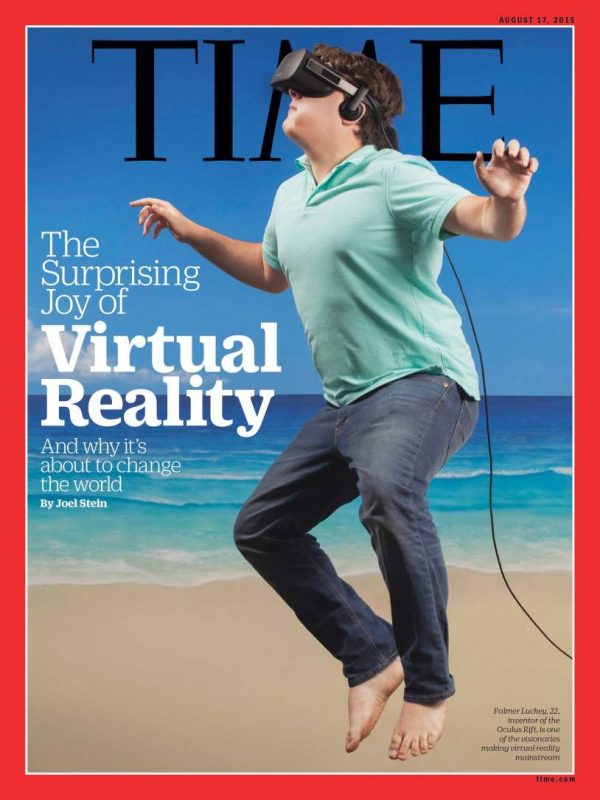 Palmer Luckey, best known as the founder of the Oculus Rift, is very familiar with memes. After all, the 24-year-old tech industry up-and-comer became a meme himself last year, after TIME magazine put him on their cover wearing a VR headset while jumping in the air in front of a beach backdrop. Now, this memeified young man has taken revenge on us all by using memes for evil.

I was trying to think of a less reductive word than “evil” to use there, but since Luckey’s been using his tech industry riches to help promote presidential candidate Donald Trump, I think you’ll understand that it’s not hyperbole. The Daily Beast has confirmed that Luckey donated big ol’ buckets of dough to an organization called Nimble America, an alt-right non-profit that promotes Trump’s message through various online marketing strategies. Mostly, they use memes.

According to one of Nimble America’s more eyeroll-worthy Reddit posts, that’s their core strategy:

We believe that America has been lead by poor leaders who have abandoned American principles and sold out all Americans. With the right leadership America will reverse its course towards mediocrity and globalism, becoming great again. We’ve proven that shitposting is powerful and meme magic is real. … Announcing Nimble America, Inc., a social welfare 501(c)4 non-profit dedicated to shitposting in real life.

I’m sure you’ve all noticed that the discourse surrounding this US presidential election has devolved into conversations about the history and the meaning of the Pepe the frog meme. That’s just the most recent example of a meme that’s turned into an election headline, but it’s hardly the only meme to make headlines in the past year (remember the Zodiac Killer meme?). Not that Nimble America is solely responsible for all of that–they’ve just chosen to capitalize on the public’s already-present interest in memes about the election. I’m hardly the first to point out the trend of this year’s campaigns revolving so heavily around social media and memes, rather than more “traditional” forms of campaign visibility.

But let’s not get sidetracked by that particular piece of cultural angst. Let us turn back to Palmer Luckey, who is not only notable for being a meme himself and for subsequently funding pro-Trump memes, but who also made headlines due to ZeniMax’s lawsuit against Oculus Rift. The most recent update to the lawsuit alleged that Palmer Luckey’s oft-cited tale about building the Rift headset as a teenager in his parents’ garage is a “false and fanciful story,” and that “Luckey lacked the training, expertise, resources, or know-how to create commercially viable VR technology. His computer programming skills were rudimentary, and he relied on ZeniMax’s computer program code and games to demonstrate the prototype Rift.”

Of course, we don’t yet know the veracity of ZeniMax’s claims. It’s entirely possible that Luckey’s story about building the Oculus Rift is totally true, and that his claims of having been a boy genius who came by all of his riches and success thanks to hard work (rather than theft) will turn out to be 100% genuine. We won’t know more about who really built the Oculus Rift until the court case plays out a bit further.

We do know, however, that Luckey has given a whole lot of his money to an organization that supports Trump via shitposting on the internet. And Luckey doesn’t just fund shitposters; he’s also been known to post a bit himself, using the screenname “NimbleRichMan” (or, at least, that’s the handle that he was willing to confirm as his, when The Daily Beast asked). In a Reddit post last weekend, Luckey wrote, “The American Revolution was funded by wealthy individuals. The same has been true of many movements for freedom in history. You can’t fight the American elite without serious firepower. They will outspend you and destroy you by any and all means.”

So I guess Luckey doesn’t think he’s using his money for evil. He thinks he’s doing good, sticking it to The Man, and fighting “the American elite”–but doesn’t seem to see himself, or Donald Trump, as being part of that “elite,” even though they’re both mega-rich dudes who may or may not have come by their wealth honestly.

So, the next time you run into a shitposter on the internet, remember: they might turn out to be a millionaire. Actually, I take it back. Let’s all try to forget that. It’s too depressing.

UPDATE (9/23/2016 at 1:50 PM): A handful of developers in the virtual reality sector have decided to stop supporting the Oculus Rift, based on Luckey’s actions. Motherboard has put together a list of the VR developers who’ve pulled Oculus Rift support from their projects so far today, and although the list is short and mostly consists of small-scale indie developers, it’s still worth noting.

It’s also worth noting that other developers have chosen to remain on the platform, in spite of their misgivings about Luckey’s political leanings. For example, VR developer E McNeill plans to continue working with Oculus, but also encouraged developers to donate money to Hillary Clinton’s presidential campaign instead. James Green of Carbon Games took a stance against the boycott, telling Motherboard, “This backlash is nonsense. I absolutely support him doing whatever he wants politically if it’s legal. To take any other position is against American values.”

Palmer Luckey has previously stated that sales of the Oculus Rift headset do not turn a profit for the company, since the headset is sold at-cost. Instead, Luckey explained, Oculus Rift hopes to earn its profits from selling software in their online store. If enough VR developers choose not to work with Oculus Rift, that could spell trouble for the platform.

Virtual reality is not a new concept, but it’s never caught on in decades past, and it’s still too early to say whether the VR trend has succeeded or failed this time around. Oculus has already faced criticism for its high price tag, along with its super-pricey competitor, the HTC Vive–at least, compared to lower-level options like Google Cardboard or the Samsung Gear VR.

Perhaps the people who can afford to buy an Oculus Rift won’t be put off by Luckey’s politics. But they might be disappointed if they don’t have as many VR experiences to enjoy after they’ve bought the headset.

(via Polygon, image via TIME)