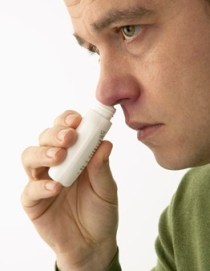 If there’s one thing that every bad stand up routine ever has taught us, it’s that men and women are different. Men like sports and violence while women like shoes and watching Sarah Jessica Parker buy shoes. Thanks to that damn reproduction thing though, we incredibly different genders have to occasionally hang out with each other. But isn’t there some way to make male Martians more like female Venusians?

Don’t fret, because the BBC is reporting that there is! A team of German and British researchers have invented a nasal spray that makes men more “empathetic.” Let the nose-based emasculation begin!

How does the nasal spray work? Let’s find out:

From the BBC article:

“They found that inhaling the “cuddle hormone” oxytocin made men just as empathetic as women.
The study in 48 volunteers also showed that the spray boosted the ability to learn from positive feedback.
Writing in the Journal of Neuroscience, the researchers said the spray may be useful for boosting behaviour therapy in conditions such as schizophrenia.
Oxytocin is a naturally produced hormone, most well-known for triggering labour pains and promoting bonding between mother and baby.”

Ooh, labor pains, sign me up! Fortunately, while the feminization effects are what’s going to get this new drug all its headlines, there are some other effects that don’t sound like they were dreamed up by the writer of a Rob Schneider comedy.

“Professor Kendrick said the oxytocin spray may prove to be useful in people with conditions associated with reduced social approachability and social withdrawal, such as schizophrenia.
And other researchers are already looking at its potential use in autism.
‘The bottom line is it improved the ability of people to learn when they had positive feedback and that is pretty important because this might help improve the effectiveness of behavioural therapy or even be useful in people with learning difficulties.'”

That’s all well and good but, until there’s proof that the drug positively affects those diseases, everyone will just know it as “the drug that makes guys act like ladies” which is kind of hilarious. Who knows, maybe the phrase “nose sprayed” will one day replace “whipped” and we can all make spray sounds at our friends when they have to go on date night instead of hanging out and drinking beers.

Oh, what a beautiful future is before us.