Oxygen on Rhea News Is Exciting; Not As Exciting as We Want It To Be 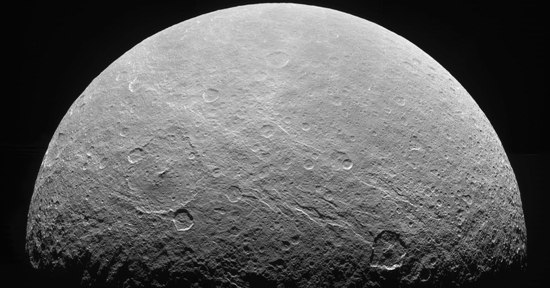 The Cassini-Huygens spacecraft recently performed the closest flyby of Rhea, the second-largest moon of Saturn, ever, to discover what scientists have long suspected: Rhea, like a couple of Jupiter’s moons, has a little baby atmosphere.  And while this atmosphere is mostly oxygen and carbon dioxide, there isn’t enough oxygen to be breathable by humans; and while the carbon dioxide could be cause by the existence of rudimentary life, there are a lot of other things that could cause it to appear.

In order to get a good reading, Cassini had to fly within 60 miles of Rhea’s surface (for comparison, 60 miles up on Earth, and you’ve just reached the beginning of the Thermosphere, higher than meteors but below the Space Shuttle, right about where the Aurora hangs out).  It turns out that oxygen makes up about 70% of Rhea’s atmosphere, but it’s still about 5,000,000,000,000 times thinner than Earth’s atmosphere.  So, not an opportunity for human explorers to breathe in an alien sky just yet.

The other 30% was found to be mostly carbon dioxide.  According to Space.com, this could be caused by any number of things, including, but not limited to, the presence of organic molecules:

It’s possible that Rhea, like many other solar system bodies, has carbon-rich organic molecules on or near its surface, researchers said. These organics could be split apart by Saturn’s charged particles, just like Rhea’s ice. Liberated carbon and oxygen could combine, forming carbon dioxide.

Micrometeorite bombardment could also be delivering the carbon for such reactions, according to the researchers.

It’s also possible that carbon dioxide is escaping from Rhea’s interior fully formed. The gas could be primordial — left over from the moon’s formation about 4.5 billion years ago — or it could be the product of long-ago reactions inside Rhea, which now appears to be geologically dead.

“We have no idea at this point which one of these mechanisms is producing it,” [study lead author Ben Teolis] said. “That’s definitely something we want to look at in the future.”

Fortunately, Cassini will make an even closer flyby in January, allow scientists another look at this new intrasolar frontier.