Oscars, Take Note: The SAG Awards Were a Thing of Beauty Last Night 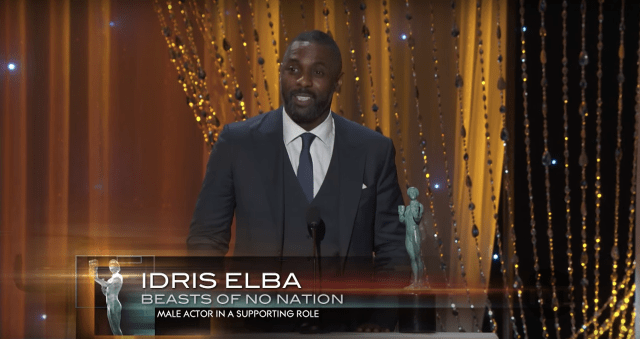 In the aftermath of the unfortunate lack of diversity in the 2016 Oscar nominations, last night’s SAG Awards delivered a little more in that area. Given that the SAG Award nominations are decided upon by the SAG-AFTRA (essentially, a pool of working actors–about 2,200 people selected at random who are only allowed to serve every eight years), chances are a little higher that the voting group is going to be a much better representation of those people currently working in Hollywood.

There were some notable names among the SAG Award nominations, too–names that had been unfortunately snubbed by the Academy Awards. The casts of Straight Outta Compton and Beasts of No Nation earned noms for Outstanding Performance in a Motion Picture–which is particularly noteworthy given that no movie with an all-black cast has ever been nominated for an Oscar.

And the list of SAG Awards winners was a great step in the right direction after what felt like a major step backwards in the Oscar nominations this year. Viola Davis, Queen Latifah and Uzo Aduba all took home Best Actress wins in their respective categories last night, while Idris Elba won two SAG Awards for both of the categories he was nominated in–one for Beasts of No Nation, one for Luther. Carol Burnett shared a moving anecdote about standing up for The Carol Burnett Show in a time where comedy variety was a man’s world as she accepted a lifetime achievement award.

The TV categories seemed to represent the diverse landscape of the medium overall when compared to the film nominations; Idris Elba even made a quip in reference to “diverse TV” when stepping up to introduce Beasts of No Nation later on in the night. And when Orange is the New Black took home the award for Outstanding Performance by an Ensemble in a Comedy Series, co-star Laura Prepon couldn’t help but point out the obvious in her acceptance speech: “Look at this stage. I mean, this is what we talk about when we talk about diversity — different race, color, creed, sexual orientation.”

Backstage in the press room after her win, Viola Davis added that while “diversity is not a trending topic”, she has faith in the actors of color who make up the current pool of talent in Hollywood. “All of the actors of color I know don’t place any limitations on themselves either so regardless of what is going on with the Academy, what is going on with Hollywood, they will find a way to be excellent. We always have and we always will.”