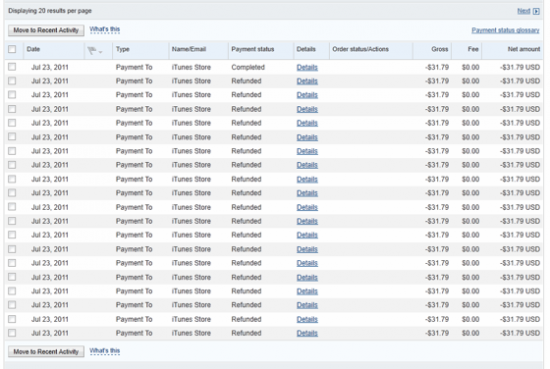 John Christman experienced a fairly inconvenient glitch when he purchased OS X Lion using Paypal: He was charged an extra 121 purchases of the operating system that he did not actually make. Including the intentional purchase, Christman was charged a grand total of $3,878.40, even though he only meant to spend the $31.79 one copy of OS X Lion costs. He claims Apple blames Paypal for the error and Paypal blames Apple.

He has a theory as to what caused the glitch, and feels it is a new feature that allows iTunes to automatically download previous purchases:

I fresh installed Lion, because the upgrade caused a lot of problems. My system needed as fresh start anyway.

As each download started it charged me $31.79. Some apps came fast, some took longer, but the timing was directly related to when a new app started to download.

Christman downloaded 116 apps in total, which is a number that is fairly close to the 121 rogue charges. Christman isn’t the only one to experience the issue between OS X Lion and Paypal, as there is a fairly long thread on the Apple support forums with various users who have experienced the same rogue charges. The issue has hit some bloggers as well, as the first search result on Google for the phrase “OS X Lion Paypal glitch” finds this post, claiming a similar issue.

The above picture of Christman’s transaction history shows that all of the rogue charges were refunded, but Christman claims otherwise, saying that even though the rogue charges display as refunded, he has yet to actually receive the money back. So, OS X Lion buyers beware.