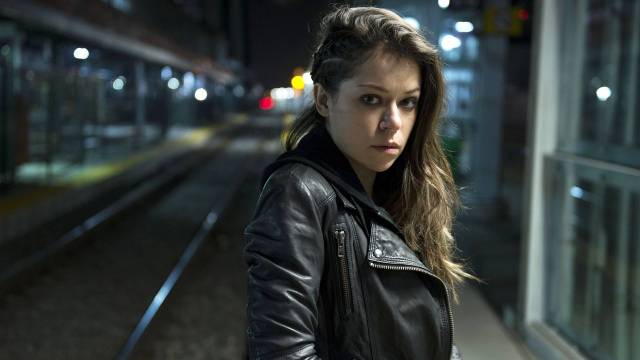 In Orphan Black’s first episode Sarah, our con-artist heroine, finds herself in a dangerous situation. She’s stolen a woman’s identity, and that woman’s big, burly boyfriend comes home early and begins pelting her with questions. The tone of the scene is tinged with domestic violence; Sarah, wearing nothing but her underwear and a Clash t-shirt, looks vulnerable, and Paul has her cornered in, of all places, the domestic cliché-loaded kitchen. In a flash, Sarah flips the script: she smooches Paul out of the corner, shoves him backward, and has sex with him on the counter.

Everything about this scene puts Sarah in control: she handles most of the disrobing, she chooses the venue – Paul says “bedroom” but she responds, “right here” – and she’s on top. In this moment, Orphan Black’s creators signaled their intention to do something powerful and radical: in the midst of a media culture that gratuitously uses rape as plot points and character development for men, Orphan Black has put sexual power in the hands of women.

Beginning with Sarah and Paul on the kitchen counter, sex scenes – or even the implication of sex – indicate that a female clone is in control. Alison’s first scene in bed with Donnie involves a very stereotypical, old-married-couple moment in which she slaps his hand away to spurn a sexual advance. She proceeds to sleep with her best friend/suspected monitor’s husband, and doesn’t have sex with Donnie until he quits monitoring and declares his loyalty to her. (In what I like to think of as Orphan Black’s writers telling the Women in Refrigerators trope to suck it, they have sex on top of a chest freezer that stores Leekie’s cut up body.)

A similar scenario plays out with Cosima and Delphine. After they have sex for the first time, Delphine searches Cosima’s belongings. This act is a clear betrayal, but Delphine promptly shows the first signs of vowing loyalty to Clone Club when she hides Kira’s existence from Leekie. Even Rachel – who has been self-aware all her life – maintains S/M sexual relationships with her monitors, and uses her relationship with Paul to hurt Sarah.

When the women aren’t using sex as a weapon, they are still engaging in consensual sex, whether it’s Sarah getting back together with Cal, Allison and Donnie celebrating their wacky business success, or Cosima finding comfort in her relationship with Shay. (The exceptions to this are Krystal and Patty, but we’ll talk about them more in part two!)

That the women hold control over their sex lives is crucial not only because it empowers them, but also because their sexual partners are often their monitors. In season one this consistency feels coincidental – Alison suspects Aynsley is her monitor, after all – but by season three it is clearly purposeful. After Rudy and Seth kill Krystal’s boyfriend, Dyad immediately produces romantic interests: “There are a three candidates vying,” Dr. Neelan tells Delphine in episode 8, “Ruthless in Purpose, and Insidious in Method.” “We’ll see which one she picks.”

If Dyad never explains why monitors must be romantic partners, it’s because the show’s writers, not Dyad, are the ones pulling the strings. Orphan Black is creating these complex relationships to prod viewers into thinking about consent. Neelan’s conversation with Delphine in episode 8 also confirms that the clones maintain the right to choose their partners. However, the existence of a monitor reminds the viewer that there is an ever-present consent issue in Clone Club’s interaction with Dyad, a medical research institution. Sarah consents to sleep with Paul, but she does not consent to be examined by sketchy scientists in her sleep, nor does she consent to an oophorectomy. When monitors like Paul and Donnie become fully aware of their roles, they must make important decisions regarding how they feel consent should work between women and institutions.

Season three more openly examines the question of consent on both individual and institutional levels. The institution that intends to use the clones is now the military, led by Virginia Coady. To Coady, the Leda clones are just bodies; Sarah, Helena and Krystal are walking piles of biology capable of healing the Castor men and advancing Coady’s research. Rudy and Seth are arms of the institution, but on an individual level they are also a serial rapists. Sex clearly factors into Castor’s plans, but it’s also a piece of the puzzle that leads to their downfall: for Sarah’s final plan to work, Gracie has to have a consensual, sexual relationship with Mark.

To take out Castor, Sarah needs Mark and his bloodied up face. However, when Felix kicks in the door of his motel room and demands he help, Mark doesn’t jump at the chance. Gracie, however, has experienced incredible character development over the course of the season: she tricks her father’s confederate flag-owning friend, gets drunk, has sex with Mark, and saves her husband-in-distress from the military by betraying Leda. By the final episode Gracie has developed her own moral code, as well as a sense of loyalty to Leda. When she wraps her arms around her husband and tells him to help, it’s as if consent and sexually empowered women are scoring a point against rape culture.

Rumor has it that Orphan Black will have a five-season run, and I suspect that the remaining two seasons will continue to put sexual power in the hands of women. However, what the show has accomplished thus far is a triumph on its own. There is little more satisfying on television than a moment like Rudy’s death scene, in which Helena compassionately pets his head but names him as what he is: a rapist. Orphan Black, please keep doing good work!

Alenka Figa is a queer, feminist, wannabe-educator who is over traditional education. She spends her days reading comics at her toy store day job, watching Adventure Time, and writing book and comic reviews at her Tumblr blog League of Shadows.