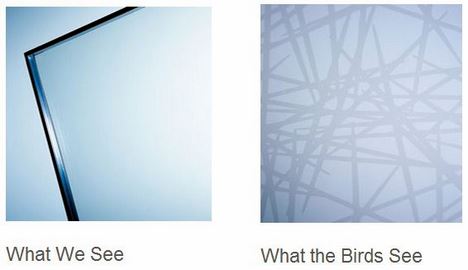 Between 100 million and 1 billion birds die from crashing into glass every year in North America alone, according to Audubon Magazine; they are either confused by the reflections in windows or simply can’t see the glass, and fly into it at full speed.

German company Arnold Glas has come up with an innovative approach to saving birds and windows alike. Their Ornilux glass features an ultraviolet coating which is almost invisible to people, but which appears as a spidery criss-cross of lines to birds: In addition to the red, green, and blue cone cells that humans have in their eyes, most birds have special UV-sensitive cones. According to Arnold Glas, Ornilux glass reduces bird collisions by 75%.

The latest version of the glass, called Ornilux Mikado, received the “red dot” award this year from the Design Zentrum Nordrhein Westfalen in Essen, Germany. Judges noted that the glass uses the same techniques that spiders use to keep birds from flying through and destroying their webs.

“The highly effective coating which, when looked at against a backlight, seems like a randomly unfolding layer of the game Mikado pick-up sticks, is barely visible to humans and integrates seamlessly into architecture …”