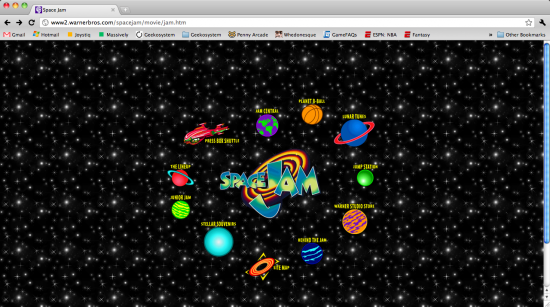 What helped Michael Jordan solidify his place as the Greatest Basketball Player of All Time wasn’t his titles, his legacy, or his ruthless competitiveness, no sir; it was the retort that Space Jam gave to Jordan supporters when comparing his prowess against other players’ prowess: “Yeah, well, Kobe and LeBron never defeated alien ballers and saved the world.”

Aside from chronicling the bright day, based solely on fact, when MJ defeated alien invaders and saved the world, the original Space Jam website is still viewable, chronicling the days of Internet Yore, when frames were acceptable and site maps were required.

Step 1) Click on “The Lineup” on the home page.

Step 2) Laugh at the frames at the top, try to find the actual links, realize they’re the barely-discernable words on the lockers, click on “The Bad Guys.” 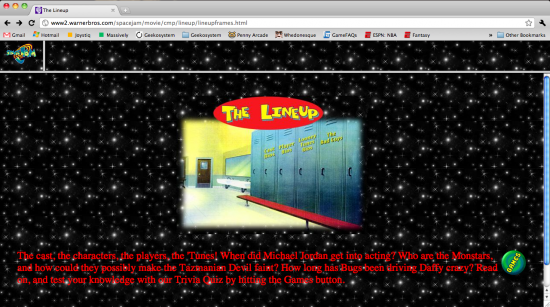 Step 3) Watch as your browser automatically downloads a file to your computer without your permission, let the influence of your knowledge of the modern Internet make you terrified that something is about to destroy your computer, gain courage after you notice the frames on the left, then open the file. 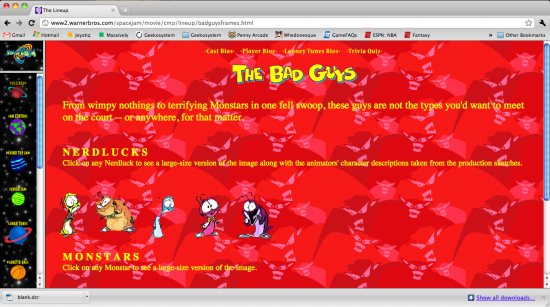 Step 4) Watch as the file automatically opens in Photoshop, then watch as Photoshop doesn’t recognize the file, be amused at how the Space Jam site gives us files without telling us how to view them, then be annoyed at how whenever you click on a Monstar to view their profile then go back to the Bad Guys page in order to view another Monstar, that file downloads each time.

This page serves as a historical Reminder of how to make two things, the Internet and Space Jam, look silly in one go. And yes, that’s my eclectic mix of super important bookmarks that have to be on the bar instead of in the folder.