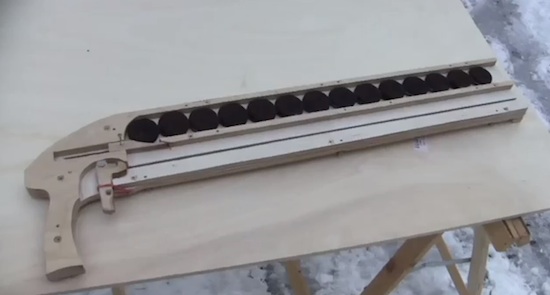 Not to be left out of the unlikely YouTube phenomenon that separating an Oreo has become of late, slingshot mad scientist Joerg Sprave has built a slingshot that takes inspiration from pump action shotguns and fires delicious cookies.  Check out the video below and find yourself suddenly craving cookies for breakfast, though hopefully they won’t be served to you via slingshot, as that looks like a really good way to lose an eye.

As always, it’s difficult not to be impressed by Sprave’s technical acumen–after all, I couldn’t build an Oreo slingshot if you gave me three months and a team of NASA engineers–but I do feel it’s possible that he is kind of missing the point here, as he is clearly more interested in using the cookies as ammunition than effectively separating them. Even more unforgivable? He’s wasting a lot of perfectly good Oreos doing it. Not cool, dude. I would have eaten those!

While it might not be the most elegant or effective way we’ve seen to separate cookie from creme, Sprave’s latest project does demonstrate that, in a pinch, America’s favorite cookie can be repurposed as a reasonably effective riot control weapon. Which is good to know, I guess?