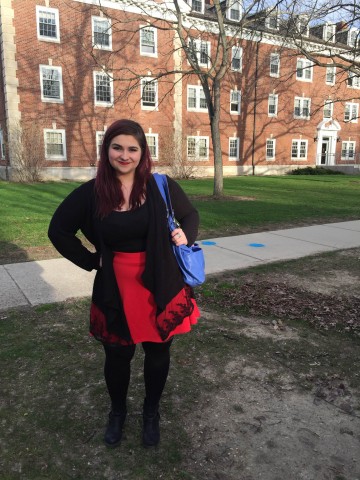 Oberlin senior Elizabeth Bentivegna is currently interviewing for post-grad jobs and experiencing some of the double standards and gender-based discrimination that comes with being a woman in tech. In a Facebook post that was brought to our attention on Twitter by former The Mary Sue Weekend Editor Alanna Bennett, Bentivegna explained: 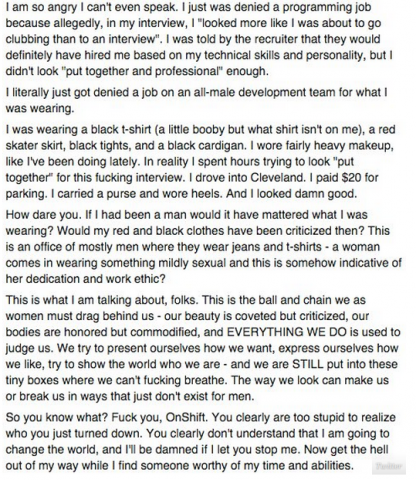 OnShift is a Cleveland-based tech company that makes medical shift scheduling software; Business Insider points out that according to LinkedIn the company does have an all-male development team. The Mary Sue reached out to Bentivegna regarding her experience with OnShift, and got a little more context on what went down:

I was contacted in late March by a female recruiter regarding a programming job at OnShift. Since I am not graduating until December, they were interested in hiring me as a summer intern and asked me to come into their Cleveland offices for an interview. I spoke with a hiring director (female) and two engineering managers (male). I felt very good about all of my conversations – I thought I got along very well with everyone and I got a good vibe from the environment. One of the engineers asked me a programming question and my answer was correct – he even complimented me on asking a question about the problem that none of the other candidates had asked. When I left, I felt very positive about my chances – I did not feel as though there had been anything wrong, and honestly I expected to get the job.

The next day, I emailed the hiring director asking when I should expect to hear back from them, and received no reply. I waited almost two weeks and emailed her again, and she said that they were down to one internship slot. About four days after that, I received a call from the recruiter. She told me that OnShift would love to hire me based on my technical skills and personality, but that they were not going to. These are the reasons she cited:

1) I “looked more like I was about to go clubbing than to an interview”
2) I “had a huge run in my tights”
3) I was late. I had told the hiring director beforehand that I would probably be a few minutes late, and then explained to her when I arrived that I had gotten mildly lost on my way).

The recruiter said that those factors caused them to decide that I was “unprofessional and not put-together”.

Although the everyday sexism faced by women in tech is undeniable, Bentivegna’s outfit sparked an important debate about the politics of “professionalism” and the implications of conflating a woman’s appearance with her worth:

I have been hired from less conservative outfits. C’mon guys. pic.twitter.com/ywvTYajvnI

Are you kidding? I wouldn’t have hired your friend either, based on her attire alone. @AlannaBennett @Karnythia

I recruited for a tech firm that served us pizza and beer on Fridays. I wore graphic tees. YOU WEAR A SUIT FOR THE INTERVIEW!!

@AlannaBennett I wore pant suits to work, the jacket was fitted, but they were SUITS and was complained about to HR for being “sexy”

@AlannaBennett I’m a CEO who wears red lipstick and short skirts! How will I ever hire and retain good talent. THE HORROR!

@HeauxTastic @TeenyTwoTimes @AlannaBennett promise honey…. I landed a job at a multibillion dollar company in a skirt like that.

@Cala_Lesina @AlannaBennett @tinybaby protip: when a marginalized person raises their voice, give benefit of doubt. All risk is on their end

The Mary Sue also reached out to OnShift for comment but has yet to hear back.