Being A Woman In STEM: Why Do I Even Bother? | The Mary Sue

Being A Woman in STEM: Why Do We Even Bother? 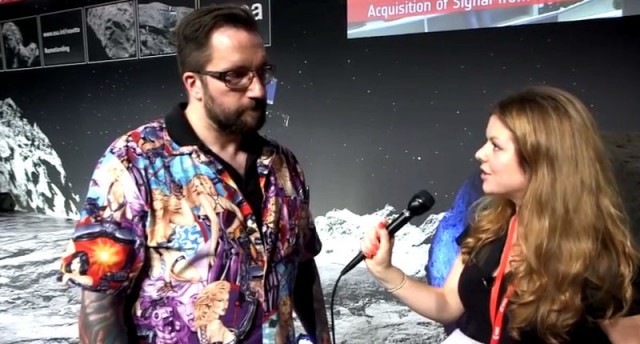 At the beginning of November, I attended a lecture on the preparations for the Rosetta Mission launch of the Philae Lander at a museum in San Francisco hosted by the museum’s senior scientist, Isabel Hawkins. After Hawkins explained the science of what we already understood about comets (‘we’ being the collective ‘we,’ like scientists and STEM aficionados, not ‘we’ like me – I didn’t know much of anything at the time), she invited NASA research scientist Claudia Alexander to call in via Skype and offer insight on the goals of the Rosetta mission, as well as to speak about her enthusiasm for the educational opportunities provided by a successful landing. So when Rosetta Mission Project Scientist Matt Taylor donned his purplish-blue gun-slinging stripper-covered Hawaiian shirt to the launch presentation, I could only imagine her sitting in her office, watching the broadcast and confoundedly thinking, “Seriously? Why do I even bother?” Years of her life had been dedicated to the Rosetta Mission, and when the world was watching, it seemed Taylor thought to himself, yes, this is how I’d like to represent our team. This seems smart. Defenders of Taylor and #Shirtgate were appalled by the media’s criticism of a brilliant scientist’s choice in clothing. “We should be focused on his achievements, not his wardrobe!” they cried.

Oh, should we now? Where was your outrage when all anyone wanted to talk about was Hillary Clinton’s fashion choices?

A couple years ago, I had an interview with a live sound production company for an engineering position that I really wanted. As I prepared for every possible standard interviewer-interviewee conversation, I knew I was a shoo-in for the job. Of course, that feeling quickly faded when the hiring manager sat back in his chair, sighed at my resume with a shake of his head, and said, “I don’t know – I think you might be too attractive to work here.” I blinked at him, swallowing the first four responses that spilled to the tip of my tongue due to their exceedingly honest and unprofessional nature, and answered with the fifth. I had resigned myself to treating the comment like the joke that it surely must have been. In jest, I suggested that if he felt my professional, put-together look was too much of a distraction, I had no issues with dressing down for the job. “Trust me,” I told him, “Being less attractive is no trouble at all.”

I left a lot of my enthusiasm for the job in his office that day. It wasn’t that he didn’t think I couldn’t do the work, or that my qualifications didn’t meet the requirements of the position; it wasn’t even that my slacks and button-down shirt combo was all that attractive. It was because he was concerned that my appearance as a human female would prove to be a distraction to his male employees, and that would be bad for his business. Essentially, he had positioned me to argue against what was, apparently, my greatest weakness: my femaleness. I sat in my parked car around the corner from the production offices, tapping my forehead against the steering wheel. Why did I even want to do this job? Nothing I could have written in a cover letter or presented on a resume would overshadow the fact that when I showed up to work, I was a woman, and that was bad. After I had given myself a headache and an even more attractive red splotch above my eyes, I sighed and asked myself, “Why do I even bother?”

Then again, no one on the Internet has ever threatened to murder me because of my work, so I really shouldn’t be complaining. At least they haven’t yet. After reading the horror stories involving rape and death threats directed at Anita Sarkeesian, a media critic and creator of Feminist Frequency, I honestly felt as if I was getting off pretty easy. Sure, I have fallen victim to the gender wage gap several times, but at least my superiors have had the decency to hide it from me as best they could. No one has sent me anonymous, threatening e-mails, promising that if I don’t stop trying to have a career in a field in which women have not traditionally been employed they would proceed to massacre dozens of bystanders in protest. It is unfathomable to me how Sarkeesian can convince herself to get out of bed, day after day, and keep going. I wonder if she ever asks herself, “Why do I even bother?” And even more so, I wonder if she has days in which she cannot come up with an answer to that question like I do. I wonder if Zoe Quinn, a video game developer who has been subjected to years of what I can only describe as “web terrorism” based on an absurd and completely false allegations, doesn’t toy with the idea of throwing in the towel and taking up knitting or accounting, just to have a bit of peace back in her life. Actually, maybe not accounting – people get really mean around tax season. I wonder if Alanah Pearce doesn’t say to herself, at least every so often, “Why am I doing this again?” If I were in their position, I know I would. I mean, I’ve suffered nothing close, and I’ve already found myself thinking exactly that.

A while back, I took a business meeting about a new job opportunity. I was extremely excited about the potential, and had spent hours gushing about the company to a friend, telling her how nice it would be to work alongside such a great team who shared my passion for audio and seemed equally as enthusiastic about what my particular skill-set would bring to the company. The manager and I talked for a while about the work over dinner, and then, as business meetings go in the modern, tech world of the San Francisco Bay Area, it turned to chatter about Game of Thrones and an in-depth discussion on the pros and cons of everything presented at the latest Apple keynote presentation. Off-handedly, he asked me if I would help him assemble his new desktop computer, and I agreed, assuming that he meant at a later date or at the office. That’s why when he said, “Let’s get out of here,” at close to eleven-thirty on a Tuesday night, I assumed he meant to our separate homes. He did not.

As it turned out, he meant to his apartment, and also, the computer components “hadn’t arrived yet.” It also turned out that it wasn’t so much my work history and professional qualifications that had intrigued him. It was a disheartening realization, one that happened inconveniently next to the passenger-side door of my car. I edged closer and closer to the driver’s side, wondering exactly how awkward on a scale of one to exceedingly it would be if I just stopped mid-sentence, threw my keys into a ditch, and took off running down the street. Had my phone not gone off and provided me with an excuse to make a quick exit, I might have just gone for it. That’s the level of discomfort that accompanies the comprehension that what was your business meeting was actually his date. As I recounted the story to my friend and the bartender the next night, I took a long sip of my drink and said rather decidedly, “Why do I even bother? I’m quitting. I quit this.” Everyone nodded and no one said a word. What could they say? I hadn’t left much room for debate.

So why do women bother with this mess? This question comes up often for me, sometimes in the form of “How much longer will I have to endure this?” and other times in the form of “I’m considering swerving into oncoming traffic to get out of having this conversation with you.” Most of the time I can soldier on, pulling myself out of bed and into another workday solely out of habit – but what about the times when I’m up against a wall that looks suspiciously like a glass ceiling, or when I’m trapped between a misunderstanding and the driver’s-side door of my Toyota in a dimly lit parking lot? What counterbalances all that stress and bother?

I can’t speak for Alexander, or Sarkeesian, or Quinn. I don’t know them. I wish I did though – they seem cool as hell. But I can speak on behalf of my own experience. I guess the reason I bother is because even with all of those disasters, I love what I do, and I think it’s important. I bother because it matters to me. I was once asked to define ‘good sound,’ and in answering the question, I had a bit of an accidental epiphany. “Good sound is invisible,” I said. “If it’s good, no one will know anything has happened.” Let’s be real here for a second – what kind of person pursues a career in which her gender is a statistical minority, and the sign of a job well done is that no one in the universe will know she did anything at all? I could tell you that only a crazy person would do that, but instead I’m going to choose the word “passionate.” A passionate person does that. In a similar way, it takes a passionate person to keep developing video games in the face of gender inequality and online harassment, to keep pursuing scientific discoveries in the face of thoughtless fashion choices, to keep taking business meetings and interviews no matter how many of them go horribly, horribly awry. Passionate people are hard to shake. Passionate people are hard to control. Passionate people are nearly impossible to shush. And this world needs passionate people.

Despite how often I was warned, when I first began my career as an audio post-production engineer, I didn’t fully understand how difficult the difficult parts of my career would be. But the great parts are even greater than I ever could have known. Like many women in male-dominated fields, I will have days where I am sure I cannot stomach the frustrations and stress of working right up against the gender gap, and I’ll ask myself yet again, “Why do I bother?” Well, I bother because I love the work, and I bother because I care. And if that’s not enough to fight the good fight another day longer, I’ll just have to remind myself that humanity landed a robot on a speeding comet, and some male scientist tried to outshine that achievement with an ugly shirt. I’m not trying to be a jerk or anything, but a lady scientist would have just dressed like a professional, and given the Philae Lander its day.

Eleanor Thibeaux is a San Francisco Bay Area-based writer and audio post-production engineer originally from the Lone Star State. A tech geek, science fiction/fantasy fanatic, and dessert enthusiast, Eleanor is the kind of Type A person who puts “finish season 4 of Battlestar Galactica” on her to-do list. It’s important to have priorities. You can find her other works via her website, or follow her every important thought on Twitter: @ethibeaux