On Internet Friends and In-Person Friends, Or As They Are More Commonly Known, “Friends” 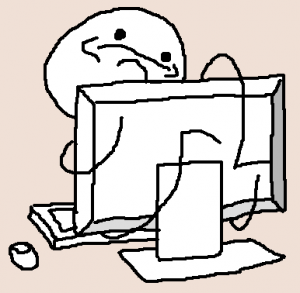 A couple weeks ago, I spent an afternoon chatting with an old friend on Skype. Back in the day, she and I were steady companions. We even shared an apartment for a year and a half. As we talked, we worked out how long it had been since we last caught up (December, at the earliest). The names of a few other friends came up, people I haven’t seen or spoken to in years. The lack of contact was understandable. I had moved away. Things change. People grow apart. It happens.

“It’s just so hard to find time to catch up,” my friend said. We both nodded, with sad shrugs and “what can you do” expressions. That’s life, right? But as we sat there in mutual agreement, something started to bug me. I have another set of friends, every bit as dear, that I keep in touch with often. Daily. Constantly. The difference is, those people don’t live far away. They live on the internet.

Like everyone who has friends online, my hackles go up when I hear folks using the term “internet friends” in a way that implies that they are lesser. Friends are friends, no matter how you make them. We stick together through marriage and death and break-ups and babies and lay-offs and new apartments and everything in between. If someone goes quiet for a few days, we check in to see if they’re okay. I send Christmas cards to some of my internet friends. I’ve gotten jobs through internet friends.

Those of us of the shy and geeky persuasion are well familiar with the added bonuses of making friends through games or fandom. You cut straight to the front of the introductory line, establishing a common ground and building up from there. Games in particular offer one hell of an icebreaker — get a bunch of strangers, all hailing from different locations and beliefs and upbringings, and make them work together toward a shared goal. The hit-or-miss behavior in pick-up groups isn’t the best for fostering new friendships, but the more controlled atmosphere of a guild can lend itself to some seriously diverse discussions. Conversations about big stuff — politics, society, religion — typically don’t come out until well after a sense of camaraderie is established. It’s hard to demonize someone over an ideological difference when you’ve already discovered that s/he is pretty cool to hang out with. Worst case, you may not like each other, but you can still set it aside when it comes time to play. Such things can happen out in the real world, sure, but I can’t think of an environment in which it happens quite as naturally.

There are downsides, of course. We all know them. The tedium of explaining the expression on your face, or the scene going on in your living room. The clumsiness of getting sarcasm across in a written message. The inadequacy of trying to find the right words to comfort someone when all you want to do is give them a hug.

Though the meaningfulness of my internet friendships has never been in doubt, there is a difference in behavior I hadn’t considered until that comment my friend made on Skype, the comment about not having enough time to keep in touch. The long-absent friends we mentioned weren’t folks we’d ever been in the habit of writing to or chatting with. They were people we’d seen every week, face to face, until we stopped sharing a common territory. My internet friends, on the other hand, never leave our common territory. It goes with us wherever we go. We’re used to communicating through writing, quickly and often. This is especially true for friends made in game, where alliances are forged in frantic chat channels, full of overlap and shorthand. These can eventually evolve into things of greater substance, but their roots will always be in a place of fast, constant chatter. No small talk. No segues. Just steady streams of ideas. I’m thinking now of two of my closest friends, both of them former WoW guildies. Our email threads actually bear some resemblance to how conversations unfold in game. We’re using big words and full sentences, but there’s nothing linear about it. Multiple threads of thought run in tandem, dashing back and forth from family news to game strategy to that day’s internet drama, interjecting new thoughts while the others are still saying their piece. I’m not sure a conversation like that would hold up between me and my in-person friends. We might bounce between topics, but our conversations are more focused, and rely on a different breed of etiquette. They’re born in coffee shops, not 10-man instances.

There’s a middle ground as well, present in friends I made out in the real world and game with. I chat and email much more with these folks, but still less than I do with people I know exclusively through the internet. It’s easier for me to throw myself into a chat channel — even voice chat — with internet friends than it is with those I’m used to looking in the eye. It’s fun, but it’s not the sort of conversation I’m accustomed to having with them. They’re meant to fill a different niche.

The flip side is the surreal moment that commonly happens when you meet an internet friend offline. At first, they feel like a stranger. That feeling may pass quickly, but it’s there nonetheless, even though that person knows everything about you, even though you talk to them every day, even though the two of you are the best healer-tank duo the world has ever seen. Suddenly, the social rules have changed. You can’t take the time to write and edit your words carefully. You can’t respond with an all-caps expletive and an animated GIF. It’s every bit as alien as it is to email with someone you’ve only ever spoken to in person.

I’ve read many things discussing — usually with concern — how the internet is changing the way we socialize. There’s this perception that the internet is making us lonelier, or cheapening our friendships. I don’t think we have to worry about that. People who want face time are always going to seek it out, and those who have difficulty making friends in the real world can have an easier time of it online. As for me, I reside somewhere in the middle. I’m always grateful for the opportunity to avoid empty chitchat, as it affords me more time to talk about spaceships. I equally love being able to see someone’s face when they laugh, or to explore a new place with a companion. The value of our friendships isn’t changing; the way we conduct them is expanding. I don’t know where that will lead us, but given the new people and ideas I’ve encountered as a result, I’m all for it. And if nothing else, I’ll be in good company.

Becky Chambers is a freelance writer and a full-time geek. Like most internet people, she has a website. She can also be found on Twitter as @beckysaysrawr.