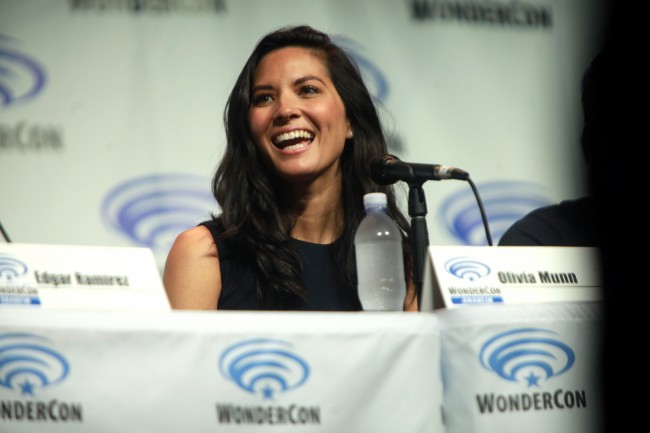 Remember a few months back, when the X-Men: Apocalypse creative team recounted the story about how Olivia Munn earned her role as Psylocke? Screenwriter Simon Kinberg put it this way at the time: “I had met with Olivia Munn for a character in Deadpool that ultimately wasn’t the right character for her, but we were like ‘We’ve gotta keep in touch, she has to do something in the X-Men world.'”

When I read that story, I assumed that Munn had tried out for Deadpool and hadn’t gotten picked. Turns out, Munn was the one who turned down the role, not the other way around! This American Way feature story summarizes the situation: “Munn was also offered a role in a very different X-Men spin-off — that of Ryan Reynolds’ girlfriend in Deadpool … Munn says she didn’t want to be the girlfriend. Not again. She wanted to fight. To make noise. To kick butt.”

Although I liked some aspects of Deadpool, I wasn’t impressed by the fact that his girlfriend Vanessa spends most of the movie waiting around, and then she closes out the picture by serving in the damsel-in-distress role. It also doesn’t help that almost every woman who Deadpool dates in the comics ends up dead, which is remarkably cliche, considering how subversive Deadpool can be when it comes to other topics (well, sometimes). When it comes to accepting roles in superhero franchises, it sure does seem like The Girlfriend Role is a cruddy pick, huh? They nearly always end up sidelined, or dead, or both. (Spoilers for Deadpool 2, probably: Vanessa dies in the comics, so her chances in the movie always struck me as grim.)

By waiting out for a role like Psylocke, Munn secured herself a way better opportunity long-term and a more compelling role acting-wise. Or, at least, that’s what she must have thought upon accepting it, but even at that point, the work had only just begun. She had to fight to get her character the scenes that she thought Psylocke deserved, as the American Way feature explains:

“I said, ‘Is there a fight scene?’ ” Munn says of her early meetings with the X-Men: Apocalypse people. Once again, the filmmakers were full of assurances. Yet Munn couldn’t shake the feeling that there might be too much talking and not enough action. “The fight scene,” she says with a wry smile, “could be her monologue.”

For Munn, the brute strength of her character was an important issue, a make-or-break thing, and the discussions dragged on. “I thought Psylocke was always one of the most lethal characters, and I said, ‘Yes, as long as you’re not using her to be the eye candy. She has really powerful abilities.’ And they said, ‘Yes, that’s an important part.’ ”

Now that we know the entire situation, it makes this play-acted, in-character fight scene between Olivia Munn and Ryan Reynolds all the more hilarious. It’s almost too bad that they didn’t end up trading off comedic barbs in a movie together … but, hey, they’re both in the Marvel universe, so it could still happen. Especially since Psylocke will probably get to live to see another movie or two (fingers crossed)!