Interview: Olga Kurylenko on Her Action Lead in Momentum and Her New Love of Stunt Driving 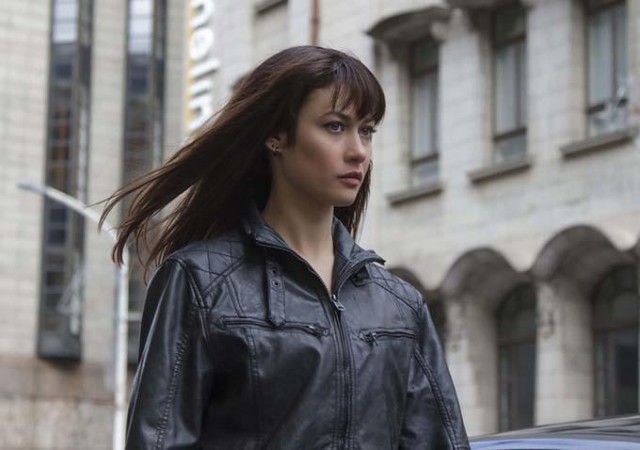 Ukranian-born actress Olga Kurylenko has already had success in the action film genre with her breakout role in Hitman, following that up as “Bond Girl” Camille in Quantum of Solace, and the science fiction film Oblivion (opposite Tom Cruise). But she was always the leading lady to the leads, not the lead herself, which is why she was eager to take the lead in the action film Momentum as a brutal thief being hunted after a heist. We spoke about the challenges and thrills of the role and her newfound love for stunt driving.

Lesley Coffin (TMS): How did the role come your way?

Kurylenko: This was actually an offer, and I read the script and thought it would be great to get to play a lead. I haven’t done that before, and it was really fun to get to take all the weight on my shoulders. It was a big responsibility, but I really appreciated the opportunity and had great fun.

TMS: Having done action films before, but usually playing second to the male lead, how was this a different experience?

Kurylenko: I did feel a little more pressure. and I thought to myself “when are my days off?” And I didn’t have any. Usually, any movie you do, you have a few days off when they are shooting scenes with others. Sometimes you might even have a week off on a bigger production. But that wasn’t the case in this movie. So I thought, “This is what those guys feel like all the time.” Tom Cruise and Daniel Craig have to shoot for long hours and it is tiring, but it’s also fun to get to do all that action. But you don’t get a break to recover, and you get tired, but you just have to keep going. There was also a lot more training for this film like muscle work and stunt training and learning all the choreography—and learning to drive a car and motorcycle for scenes. I remember them saying, “do you know how to drive a motorcycle?” And I told them yeah, I took classes when I was going to get a license for a motorcycle. But then I fell and lost my nerve. I got scared, because the road was slippery from rain when I fell, and now, years later, I got back on the bike to shoot the close-ups. I of course wasn’t doing the scenes when the bike is going 200 miles an hour, but I got to get back on the bike.

TMS: I was surprised to realize how many action movies you’ve actually done. Do you find yourself drawn to them personally?

Kurylenko: Yes, I think I do. They are fun, although some are better than others. But they are great entertainment. But when I was starting, I never thought I would do an action movie. I’ve managed to do lots of other genres, but I never thought I would be considered an action actress. Because when I got involved in acting, I was watching movies by directors like Michael Haneke and Bergman, which are completely different. But then Hitman came out and after that, I got so many offers for action films. The first thing people see you in is what they want to put you in all the time. But it is great to do these types of films every once in a while, and alternate between action, and drama, and small independent films. I still haven’t done much comedy, but I would like to, because that is a genre I like a lot.

TMS: It is made clear relatively early on that your character can be just as ruthless as the guys, and she thinks of this heist purely as a job, rather than a history of victimization or revenge. Was that part of her appeal as a female action character for you?

Kurylenko: Absolutely. I like her strength and her power. In a way, she’s just as reckless as her opponents, she just happens to be the protagonist. She’s made mistakes too and isn’t on a very clear path, and we learn that she has some baggage later in the film. But she is not victimized at all, and is just a very kick-ass woman. We see men like that in films all the time, and it is nice to introduce female characters the same way.

TMS: Did you have a favorite stunt or sequence on this movie?

Kurylenko: I usually enjoy learning all the choreography. But I loved all the driving. Half the film was shot at night, and we had weeks of night shooting, filming on the streets at very high speeds, and I loved it—getting to drive like a maniac. And sometimes that’s terrifying, but funny enough, if I was driving, I wasn’t scared. But if someone else was driving, I was terrified, and the people driving me were the professional stunt drivers and 100 times better than me, but there was just this psychological thing. When you are driving, you think nothing will happen because you’re in control, and my favorite was this scene we shot in a parking lot, when I had to drive really fast at a brick wall, and at the last minute, turn the car. And the director, Stephen, said, “Can you manage to turn left without slowing down?” And I was like, “Yeah, yeah.” And my mother was on set that day, freaking out. But I felt totally fine doing it. It’s this strange thing. When you’re in control, you think, “I’ve got it.”