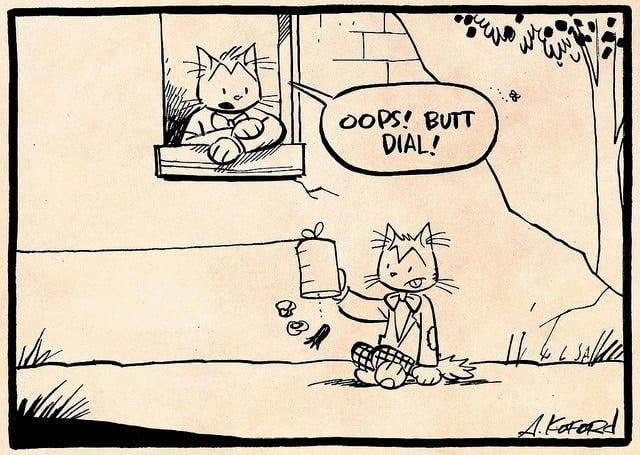 You know what they say – with every new advance comes a whole new set of problems. Thanks, cell phones/smartphones! In Ohio recently, the federal appeals court ruled that if you butt dial someone, and the party you accidentally called eavesdrops on a conversation you’re having, that isn’t an infringement of your privacy, since you placed the call.

You can read the full decision here, but the basic story is this: James Huff, who used to be the chairman of the Airport Board in Kenton, Kentucky, sued Carol Spaw, a secretary at the Cincinnati/North Kentucky International Airport after he accidentally butt-dialed her in 2013. You see, said butt-dialing happened at a time when he was having a private conversation with his wife, Bertha, in which he was discussing plans to dismiss or demote Candace McGraw, the airport’s chief executive officer, who also happened to be Spaw’s boss. Like a good secretary (I guess?), Spaw didn’t hang up, but instead listened in on the conversation and took notes, presumably to warn her boss about possibly being fired. She also recorded several minutes of the hour and a half-long conversation!

However, despite the fact that – since Huff placed the call – he can’t sue for being listened in on, a lower court can now decide whether or not his wife’s rights were infringed upon, since she was being eavesdropped on and recorded completely without her consent, and wasn’t even responsible for the offending butt-dial. We’ll get to the bottom of that story, and bring you more on that as it develops.