The Odinson Finally Returns to His Own Solo Comic, The Unworthy Thor 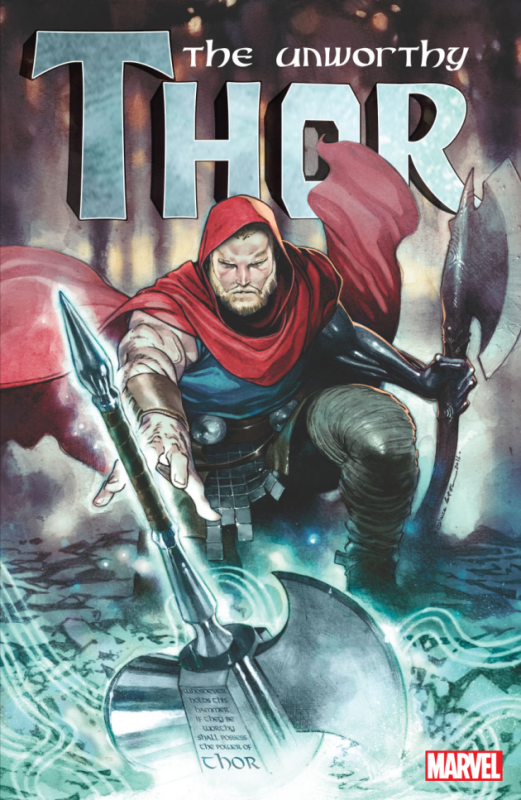 Since 2014, the Odinson Formerly Known as Thor has been without his beloved Mjolnir as a new, female Thor (the indomitable Jane Foster) has taken up both the mantle and the hammer. The Mighty Thor has followed Jane as she embraces her new life of heroism, having been selected by Mjolnir as the one worthiest to carry on the Thor name. Meanwhile, Odinson has been adrift, struggling to find his place and hurt that for some reason he is no longer worthy. Now, we finally see him start to get somewhere in his own solo title, The Unworthy Thor.

The Unworthy Thor will be written by Mighty Thor writer, Jason Aaron, with art by Olivier Coipel. According to io9, the series “will follow the god’s escape and captivity—revealed to be at the hands of none other than cosmic archiver the Collector—and his journey to becoming a hero once more. But he’s not taking Jane’s place: Unworthy Thor is expressly a companion series to Mighty Thor. The Odinson is forging his own path, and will even wield his own hammer… one that actually has some pretty huge connections to the Pre-Secret Wars Marvel universe.”

And look at that hammer depicted on the above cover. I have to say, that looks like a serious upgrade. Take that, Mjolnir, you fickle jerk. You don’t also have an axe and a spear!

In an io9 interview Jason Aaron confirms that giving Odinson his own title again, and a separate but parallel story to Jane’s was always the plan:

“I decided to focus in on Jane in a big way and left it as a mystery. What had happened to him. Where he’d been, what he was up to— you know, it was only in issue five of The Mighty Thor that we got a tease of where he was. This was always kind of the next part of his story. I just like the mystery of leaving him off he table for awhile. And we could bring him back in a very big way.

How he will be referred to as far as we know right now, he’s given up being Thor. He gave that to Jane. Doesn’t want to be called that name. But we also know he’s on a quest to figure out who he is, without Mjolnir. And striving to become worthy again. So, you know this book really kicks off by him finding out— you know what, there’s another hammer out there— there’s another Mjolnir. It sets him off on the thing, so… is this it? Is this how he becomes worthy? How he becomes Thor again? That’s one of the big questions driving the book.”

So, it looks like Thor is being added to the list of Marvel heroes that have more than one person donning the mantle and headlining books side by side, along with Captain America, Wolverine, Spider-Man, and The Hulk. I’ve gotta say that I’m glad that Marvel’s figured out a simple, yet elegant way to ensure diversity while staying true to legacy characters. Remembering that mantles and characters are two different things. It seems that Marvel is getting better at using both well and recognizing that anyone can wear and embody a mantle, and that even multiple characters can wear the same mantle without diluting the symbol.

Are you looking forward to reading the solo adventures of the Odinson? Tell us below!

(via Comics Alliance, image via Marvel)