The Oculus Rift Is Watching You | The Mary Sue

The Oculus Rift Will Collect Your Personal Data “Automatically.” But… What For? 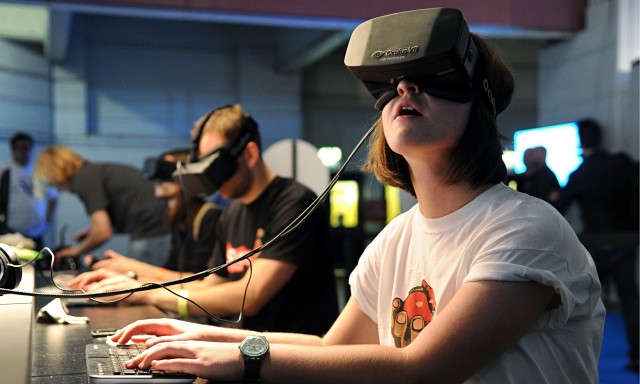 Last week, rumblings began about the wording of the privacy policy for the Oculus Rift, the Facebook-owned virtual reality headset that tons of people have already pre-ordered. Upload VR dissected the wording of the policy, particularly the bit about the “information automatically collected” by Oculus whenever the owner uses it. Oculus stipulates in their policy that they may provide this user information to third parties, such as their owner Facebook, or “related companies.”

What information are they collecting, exactly? The full text of the policy says that Oculus may collect “information about the games, content, apps or other experiences you interact with,” as well as “the games, content, or other apps installed on your device… including from third parties,” plus “location information,” such as “IP address.” That last bit could even include GPS coordinates, “if you’re using a mobile device.” Oh, and here’s the creepy bit: “information about your physical movements and dimensions when you use a virtual reality headset.”

Creepy or not, that last one at least sounds logical. I can see how that data might be useful for doing large-scale QA testing of virtual reality games and experiences. But all of that other information sounds like it could mostly be valuable for Facebook and other “third parties” who would want to engage in targeted advertising.

The concerns from users about the wording of this policy make sense in the larger context of what we expect from our technology now … and the privacy levels that we wish we could have. Facebook already has a history with data-mining its users’ personal information, even tracking users’ habits on sites other than Facebook. Facebook has even been known to disregard when users have “Do Not Track” settings turned on in their browser. Knowing that, and knowing that Facebook owns Oculus, it makes sense that people are already concerned about the potential for data-mining here.

Ars Technica explains that this aspect of the Oculus Rift’s software isn’t opt-out, and also includes some quotes from Senator Al Franken, who voiced his concerns about this privacy policy in an open letter addressed to Oculus CEO Brendan Iribe. Franken writes, “I believe Americans have a fundamental right to privacy, and that right includes an individual’s access to information about what data are being collected about them, how the data are being treated, and with whom the data are being shared.”

Franken went on to ask several pointed questions in an effort to clarify what exactly Oculus intends to do with the information they collect, particularly with regard to sharing it with “related companies.” In other words, Franken is asking Oculus if they are collecting this information with an intent to use it for less-than-savory purposes (e.g. selling it to advertisers for big bucks), or if they genuinely intend to use this information to make better VR experiences. If it’s the latter, that’s cool. If the former? Blech!!

Ars Technica makes the point in their coverage that many other digital entertainment services also collect user data, such as Hulu and Netflix. However, Netflix recently admitted that they consider most of this information to be “garbage” (in their own words), because it doesn’t actually help them determine what types of content to create. The only thing that helps them with that is looking at users’ viewing preferences, rather than gender or age or ethnicity or geography.

Incidentally, Netflix’s findings should probably inspire advertisers to rethink how they do targeting. Is it even worth their money to buying location data if that data doesn’t indicate anything about what users actually want? If gender, age, ethnicity and location don’t play a big role in what people like to watch, that seems like something an advertiser would want to know, hm?

Anyway, if Oculus uses their users’ personal information to make better virtual reality experiences, then that doesn’t seem too bad to me. That said, I still don’t really want services to be watching me all the time, and as Netflix’s research has discovered, my personal taste matters more than my location information. I get why Oculus would want to look at my gaming library. But why do they need my GPS coordinates?

Hopefully Oculus will reconsider this methodology, or at least clarify to Senator Franken as to what they intend to use this information to do.