Tomorrow I’ve bought the 8pm showing of #hiddenfigures the rave Baldwin hills. If you know a family in need that would like to see our movie but can’t afford it have them come. It’s first come first served. My mom would not have been able to afford to take me and my siblings. So, I’m honoring her and all single parents this #mlkweekend Pass the word. Artwork by @bystellablu

Some movies are important for their artistic achievement. For others, their impact is about so much more than mere critical accolades. Hidden Figures is one such film, which is why star Octavia Spencer, as well as community leaders, teachers, and fraternities and sororities have been making it possible for underserved communities to see it when they otherwise might not be able to.

As reported by The Huffington Post, Spencer, who plays real-life NASA computer genius Dorothy Vaughan in the film, bought out a screening this weekend at a movie theater in Baldwin Hills (which, if you have been to Los Angeles, you may have heard referred to as “the black Beverly Hills”) and invited families in need who wanted to see the film to come to the screening for free on a first come, first served basis. As she said on Instagram, “My mom would not have been able to afford to take me and my siblings. So, I’m honoring her and all single parents this #mlkweekend.”

That’s something I’ve thought about a lot lately, and a big reason why a goal of mine is to write for television. Growing up, my family was not well off, and I didn’t receive that thing that I’d heard about on TV called “an allowance,” and so going to the movies was a huge luxury. I didn’t start going to the movies often until I was a teenager and started making my own money, which meant that a lot of “geek classics” that many of my peers saw over and over again in the theaters when they were young kids I missed out on until later in life. Hell, even renting movies back in the day wasn’t something that was easily done financially. Developing an interest in and knowledge of quality films is a luxury that many people don’t get to cultivate, whereas television comes into one’s home and can touch the lives of more people across the socioeconomic spectrum.

But I digress. (Though I certainly wouldn’t turn my nose up at a Hidden Figures television series!)

Films are important not just because exposure to them gives kids options as far as possible career choices (more female directors! more screenwriters of color!), but because depending on the subject matter, films can spark minds and inspire dialogue about people and topics that weren’t, or couldn’t be discussed in any other way. Hidden Figures was based on the book Hidden Figures: The American Dream and the Untold Story of the Black Women Mathematicians Who Helped Win the Space Race by Margot Lee Shetterly, which tells the story of three black, female NASA employees who helped put a man in space.

The book got the story out to a lot of people, but a book’s audience is much smaller than a film’s audience. Adapting the book into a film allows the story to get to the people who might need it the most: young girls of color who may or may not be financially disadvantaged, but all of whom would benefit from seeing the possibilities for women and women of color in fields like STEM. As The Representation Project says all the time, “You can’t be what you can’t see.” But what happens when young black girls see the story of real-life black women who worked for NASA? Amazing things, that’s what. 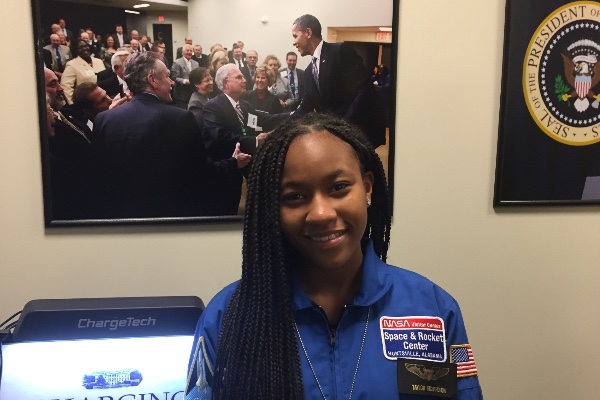 Which is why, in addition to Spencer, people all over the country have been organizing to give as many underserved young people of color and their families the chance to see this film. One of them is an amazing 13-year-old aspiring astronaut named Taylor Richardson, who was inspired after attending The White House “Hidden Figures in Space Exploration” presentation, which included a screening of the film. She started a GoFundMe to raise money for 100 girls to see Hidden Figures as well as buy them snacks and a copy of the Hidden Figures book in her hometown of Jacksonville, Florida.

“I cried, I laughed, I got angry and then got determined to not let others’ impressions of me because of the color of my skin impact how my life will be,” Richardson said. “These black women did something I never knew about, and it’s not in any history books that I’ve studied thus far.” As of right now, Richardson has raised her $2,600 goal several times over!

People across the country are continuing to organize screenings and get the book in girls’ hands, and I can’t think of a more lovely way to pay tribute to the women the film portrays.

(via The Huffington Post, featured image via Stella Blu on Instagram, Richardson image via her GoFundMe page)