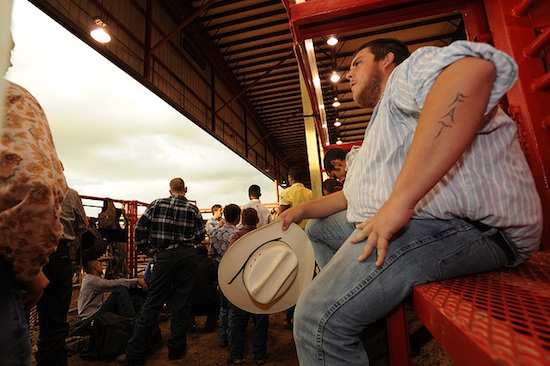 This week, we’re taking a look at recent studies of obesity in America, starting with some surprising news of chemically-induced obesity, and wrapping up with some depressing, if unsurprising, predictions about America’s fat future.

The much maligned estrogen-like chemical Bisphenol A (BPA) has taken flack for everything from messing with hormone levels, to interfering with gene expression, to increasing the risk of heart disease. That’s the sort of stuff that got the susbtance banned from baby bottles earlier this year — a ban that many said didn’t go far enough. The chemical, which is still in all sorts of products, like soda cans, where it provides lining between soda and can, is getting another bad rap today as researchers released a report in the Journal of the American Medical Association suggesting that BPA is also linked to childhood obesity. There’s no suggestion for what property of BPA could be making kids overweight, but a study of more than 3,000 kids found that those with high BPA concentrations in their urine samples were twice as likely as their peers to be obese after other factors had been controlled for. The news could help take some of the heat off of other suspected culprits in the American obesity epidemic.

One of the most commonly cited offenders on that list — high fructose corn syrup — may not deserve the ire leveled at it as a cause of obesity. A study released today in the International Journal of Obesity found that the sweetener didn’t earn its dastardly reputation as the most fattening substance in America’s increasingly gross fast food diet — I’m talking to you, Taco Bell First Meal with a Mountain Dew AM. The study is not, it should be noted, an endorsement of high fructose corn syrup by any means. It is still a vile substance replete with empty calories and boasting a nutritional fact sheet that would make paint thinner blush. But is it solely responsible for all the new notches punched in our national belt? Not by a long shot.

If you’re getting fatter, and most of us are: Maybe don’t worry about it too much? You’re in very, very good company, after all. Or at least, there are a lot of us in the same boat, the bottom of which is no doubt beginning to scrape threateningly along the bottom of life’s river. According to a report this week by the Robert Wood Johnson Foundation and the Trust for America’s Health, by the year 2030, obesity rates will be at 44% in all 50 states. In 13 of those states, mostly in the American south, researchers expect the obesity rate to hit or pass 60%. The current fattest state in the nation, Mississippi, is expected to retain its crown with projections predicting that its nation-leading 34.9% obesity rate will nearly double to 66.7%, leaving 1 out of 3 Mississippians feeling pretty good about their physique by just by taking a quick look around.